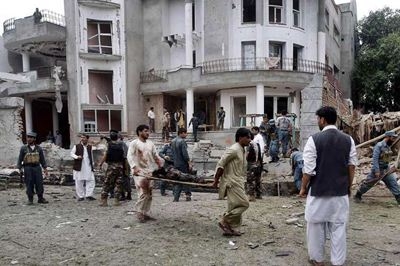 Jalalabad:  A small bomb exploded near the Indian consulate in the eastern Afghan city of Jalalabad today, authorities said, after a series of attacks on Indian installations in the region.

The blast, which happened the morning after a gun and bomb siege near the Indian consulate in a northern Afghan
city, was some 200 metres from the consulate in Jalalabad, an Indian diplomatic source there told AFP.

The source and Afghan authorities said no one had been injured. The explosion also follows a bloody weekend assault on an air base in India near the Pakistan border.

But Vikas Swarup, a spokesman for India’s ministry of external affairs, told AFP the Jalalabad consulate “was not the target”. The area also houses the consulates for Pakistan and Iran.

Ataullah Khogyani, a spokesman for Nangarhar province’s governor, said authorities were unsure what the target was but a police convoy had been passing at the time.

“The explosives were placed in a garbage can,” he added. The attack was not immediately claimed. Indian interests have been targeted twice since Saturday in spectacular assaults: an attack on its consulate in Mazar-i-Sharif, and a raid by Islamist insurgents on an air force base in the northern Indian state of Punjab.

India has been a key supporter of Kabul’s post-Taliban government, and analysts have often pointed to the threat of a “proxy war” in Afghanistan between India and Pakistan.

The Taliban have also stepped up attacks on government and foreign targets in Afghanistan, including a series of assaults in Kabul over the weekend, underscoring a worsening security situation.

The volatile province of Nangarhar, which borders Pakistan, also faces an emerging threat from loyalists of the Islamic State group which is making gradual inroads in Afghanistan, challenging the Taliban on their own turf.