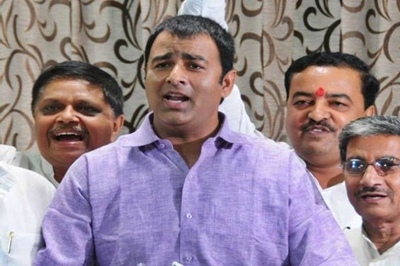 Ghaziabad (Uttar Pradesh) : BJP leader Sangeet Som, who was allegedly one of the spearheads of the 2013 riots in Muzaffarnagar, Uttar Pradesh, on Thursday rejected the conclusions of the Justice (Retired) Vishnu Sahay Committee report on the incident.

“I completely reject this report. I don’t think it is of any significance,” Som told ANI. He further said, “I want to ask why the commission of inquiry did not make us part of probe in any way? Did it take our inputs?” Som’s comments came after the Congress Party on Thursday demanded strict action against the perpetrators of the Muzaffarnagar communal riots in 2013 as per the report submitted by Retired Justice Vishnu Sahay Committee to U.P Governor Ram Naik.

“Strict action should be taken against those who perpetrated the riots in Muzaffarnagar and were responsible for killing of innocent people irrespective of which political party are they come from,” Congress leader Manish Tewari told ANI here. The report has blamed the Bharatiya Janata Party (BJP) and the ruling Samajwadi Party (SP) for the violence in Muzaffarnagar.

“If a commission of enquiry has said so, then action needs to be taken against all those who are ideologically and physically responsible in the riots in 2013,” said Tewari. “But unfortunately the reports of the commission have been confined to the record room and no action is taken against them,” he added. Justice Sahay had submitted the 775-page report divided into six sections on the 2013 Muzaffarnagar communal riots investigation report to Governor Ram Naik on Wednesday. Sahay was appointed by the Samajwadi Party (SP) government to look into the reasons behind the riots that left over 63 dead and rendered over 55,000 homeless.