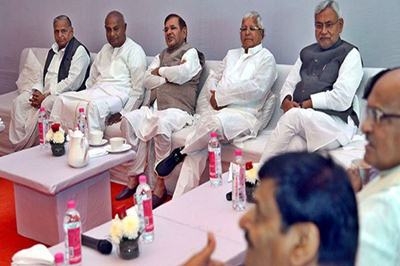 New Delhi: With its allies mounting pressure, BJP today indicated that it will finalise seat-sharing deal with them for the Bihar Assembly polls by the first week of September. Claiming that Prime Minister Narendra Modi’s rallies had set off a “storm of change” in the state which Chief Minister Nitish Kumar and his foe-turned-ally Lalu Prasad have ruled for 25 years between them, the saffron party said over 60 lakh people had attended more than 50,000 public meetings organised by it so far.

Party general secretary and Bihar in-charge Bhupender Yadav told reporters that they had informally met the leaders of their allies like LJP, RLSP and HAM (Secular) over the seat-sharing arrangements and formal talks will be held in the first week of September. Asked about the possible date for final announcement of seat-sharing, he noted that it was made in the first week of September for previous Assembly elections in 2005 and 2010.

Unlike the last two polls when BJP was in a settled tie-up with Kumar-led JD(U) with both parties having few differences, this time its allies have been piling pressure for a larger share of 243 seats going to the polls than it is likely to concede.

Ram Vilas Paswan-led LJP, Upendra Kushwaha-led RLSP and Jitan Ram Manjhi-led HAM are fighting the assembly polls in alliance with BJP for the first time. Yadav said the Modi-led BJP campaign in the state had put development at the centre stage of campaign and attacked Kumar for his “petty politics” over the Rs 1.25 lakh crore package.

“He is opposing the biggest package for Bihar for nothing but politics. This is a kind of petty politics we have not seen before… Modi’s rallies have sparked a storm for change in the state which will gather more pace after his rally in September 1 in Bhagalpur,” he said. Asked about Congress criticisms of the Centre and the Gujarat government, the BJP leader said the opposition party was doing so for political reasons.