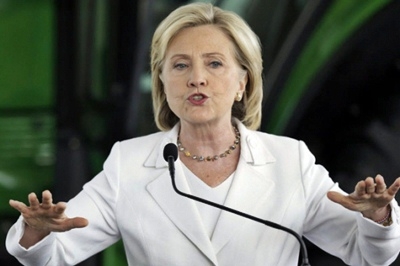 Beijing: A Chinese government official said today that Hillary Clinton was “biased” on women’s issues in China, while a newspaper compared the presidential hopeful to Donald Trump for her tweet saying it was “shameless” for China’s president to preside over a UN conference on gender equality.

Rights activists had criticised Chinese President Xi Jinping’s co-chairing of yesterday’s UN Women conference because of China’s detentions of women, including five who were detained for 37 days this year over their plans to advocate against sexual harassment on public transportation. Wang Yu, a female lawyer who defended one of the activists, has since been detained. Clinton tweeted yesterday: “Xi hosted a meeting on women’s rights at the UN while persecuting feminists? Shameless.”

Chinese foreign ministry spokesman Hong Lei said today that China protects its people’s rights in accordance with the law. “Someone in another country is biased on the relevant issue,” Hong said in response to a question about Clinton’s tweet. “We hope that they will respect China’s judicial sovereignty.” The Global Times, which often publishes nationalist editorials, wrote today in its Chinese edition that Clinton’s words — which it did not mention — were “vulgar, extremely lacking in manners” and called to mind “big mouth” Trump.

The Communist Party-run paper suggested that Clinton was “alarmed and jealous” at Trump’s continuing excellent showing in polls, so had resorted to using his style of language. The editorial was carried on major news portals and websites of other state media, including the China Youth Daily and China National Radio. Trump has accused China of stealing U.S. jobs and called for the cancelling of a state dinner for Xi after a drop in China’s stock markets and a devaluation of its currency led to a tumble of US stocks.

Yesterday’s conference was a follow-up to a 1995 UN conference on gender equality in Beijing that Clinton addressed as first lady. She said then: “Human rights are women’s rights and women’s rights are human rights.” Xi echoed her words yesterday, telling the conference: “Women’s rights and interests are basic human rights. They must be protected by laws and regulations.” He did not mention any of the women activists, but announced a USD 10 million donation to UN Women, and said that China would help developing countries produce 100 “health projects” for women and children, finance 100 programmes to send poor girls to school, train 30,000 women from developing countries in China, and provide training opportunities for 100,000 women in other developing countries.