Bad nuke deal with Iran is worse than no deal: Susan Rice 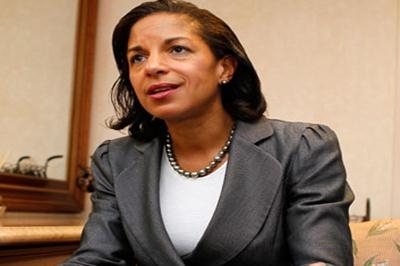 Washington: President Barack Obama’s national  security advisor has said that a bad nuclear deal with Iran is worse than no deal at all, asserting that the US is keeping all options open to prevent it from developing atomic weapons. NSA Susan Rice told a meeting of the American-Israel Public Affairs Committee that President Obama was committed to “ensuring that Iran does not get a nuclear weapon”. “Israel’s security is at the heart of one of President Obama’s most important foreign policy objectives,” Rice said, commenting on Israeli Prime Minister Benjamin Netayahu’s remarks that Obama did not fully understand his nation’s vital security concerns.

She recalled the US president’s statement in Israel that “America will do whatever is must to prevent a nuclear- armed Iran”. “President Obama said it. He meant it. And those are his orders to us all,” Rice said. “Given Iran’s support for terrorism, the risk of a nuclear-arms race in the region, and the danger to the entire global non-proliferation regime, an Iran with a nuclear weapon would not just be a threat to Israel, it’s an unacceptable threat to the US,” she said. Assuring Israel that the Obama administration acknowledges its concerns with regard to talks with Iran, she said, “We understand the concerns of our Israeli friends and partners. I want to be very clear. A bad deal is worse than no deal.”

In an apparent reference to Netanyahu’s speech in Congress, she warned that “sensitive details” of the ongoing negotiations with Iran should not “be discussed in public.” “I’m not going to get into details about ongoing negotiations nor should sensitive details of an ongoing negotiation be discussed in public,” she said. She, however, revealed new insight into Washington’s negotiating position in the P5+1 talks with Iran.  With the Joint Plan of Action, the US-led international community has already succeeded in halting Iran’s nuclear program and rolling it back in key areas, she said.

“Iran is doing away with its existing stockpile of highly enriched uranium. It has capped its stock of low enriched uranium and the country has not constructed additional enrichment facilities. “Iran has not installed or operated new centrifuges. It has halted construction at its potential plutonium reactor at Arak. In short, Iran is further away from a nuclear weapon than it was a year ago,” she said. Rice said it remained to be seen whether a good, long-term comprehensive deal could be achieved. She said a good deal is one that would verifiably cut off every pathway for Iran to produce enough fissile material for a nuclear weapon.

Rice listed the components of the such a deal: “Any deal must prevent Iran from developing weapons-grade plutonium at Arak, or anywhere else. Any deal must prevent Iran from enriching uranium at its nuclear facility at Fordow,” she said. “Any deal must increase the time it takes Iran to reach breakout capacity – the time it would take to produce a single bomb’s worth of weapons-grade uranium,” Rice said. It must ensure frequent and intrusive inspections at Iran’s nuclear sites and address the possible military dimensions of Iran’s nuclear program. And, any deal must last more than a decade — with additional provisions ensuring greater transparency into Iran’s program for an even longer period of time, she said. She said Iran will be further isolated if it refuses to resolve the matter diplomatically.

She also reiterated the US’ “unwavering” commitment to Israel’s security and listed out efforts undertaken by the Obama administration in the last six years to strengthen the bilateral ties. “The security cooperation between our countries is not just strong but it is stronger than it has ever been. Both President Obama and Prime Minister Netanyahu have called it ‘unprecedented’. And that’s the way it’s going to stay,” she said. “Our armed forces conduct extensive exercises together, and our military and intelligence leaders consult continually,” she said. She said that since President Obama took office, the US has provided Israel with more than USD20 billion in foreign military financing. The US is assisting Israel in maintaining qualitative military edge with access to new defense technologies and most advanced military equipment in the world, she said.