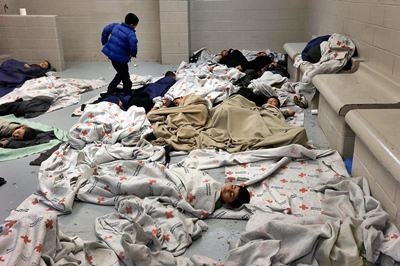 Detainees sleep in a holding cell at a U.S. Customs and Border Protection processing facility, Wednesday, June 18, 2014, in Brownsville,Texas. CPB provided media tours Wednesday of two locations in Brownsville and Nogales, Ariz. that have been central to processing the more than 47,000 unaccompanied children who have entered the country illegally since Oct. 1. (AP Photo/Eric Gay, Pool) |

Canberra: Doctors and health professionals Friday in throughout Australia demanded the government release children from immigrant detention centres. The protest outside hospitals in cities including Sydney, Darwin, Brisbane and Adelaide, also demanded the release of families detained in these centres, EFE news reported.

“Keeping children in prolonged detention, without them knowing what’s happening to them, is child abuse,” said pediatrician David Isaacs, highlighting that these “are people who are already traumatised. They’re fleeing persecution.” Anxiety, nightmares and sleep deprivation along with bed-wetting, are common symptoms present among children held in these detention centres, said another physician Karen Zwi.

“In extreme cases, children are self harming and attempt suicide,” she said. A Senate committee in August called for an investigation into the allegations of sexual abuse and other violations in immigrant detention centres that Australia has in Nauru, which cooperates together with Papua New Guinea in its policy against illegal immigration. The Australian Human Rights Commission also reported in February that many children held in these centres had self-harmed or attempted self-harm, and that dozens had been sexually abused.