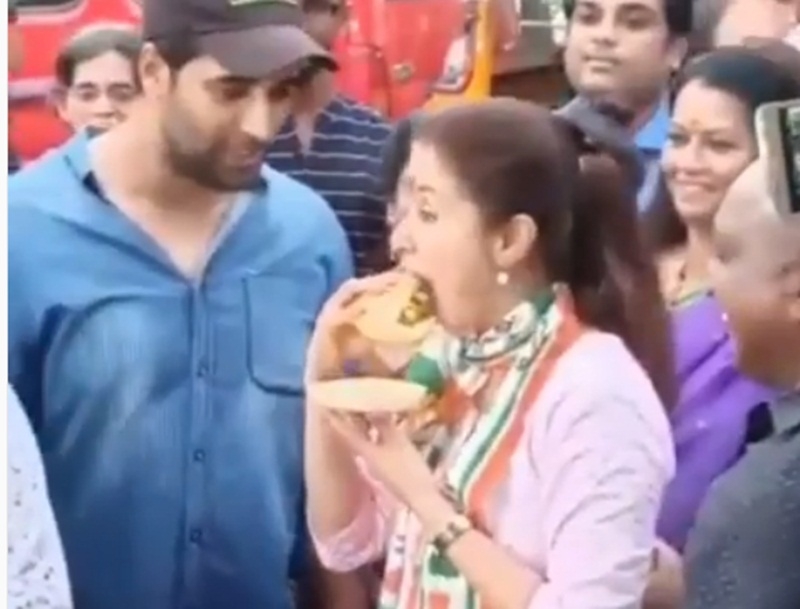 Bollywood actress Urmila Matondkar recently joined Congress and, soon after joining, she was chosen to contest Lok Sabha elections against BJP candidate Gopal Shetty from Mumbai North seat. As elections are coming closer, she can be seen on the streets of Mumbai asking people to vote for her. Now a video has gone viral on social media where Urmila can be seen munching Mumbai’s favourite snack Vada Pav.

As she was enjoying her hot Vada Pav, the party workers with her were seen smiling away. After taking a quick bite, Urmila is seen heaping praises for the snack and showing a thumbs up after she’s has finished the vada pav. Going a step further, she even asks one of her supporters to pay for the vada pav.

In the pictures, Urmila Matondkar is seen donning a pink kurta and draping a Congress flag as her dupatta around her neck. To complete her look, Urmila has tied her hair in a pony and is seen sporting a red tika on her forehead.

On March 27, 2019, Matondkar traveled to Delhi and met party president Rahul Gandhi, after which she was formally inducted in the Congress party. Urmila Matondkar and Gujarat Patidar leader Hardik Patel will address a ‘Mega Youth Meet’ in Andheri on April 7, 2019, and will be seen interacting with the youngsters, especially first-time voters, and will campaign for Mumbai North-West Congress nominee Sanjay Nirupam, who has convened the meet.