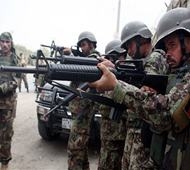 Kabul: Afghan government forces have increased pressure on Taliban militants since the death of the group’s supreme leader Mullah Akhtar Mansour as armed insurgents were killed across the militancy-plagued country over the past week. According to security officials, more than 100 militants, including several commanders were killed and hundreds injured since confirmation of Mansour’s death.

In the latest push against Taliban, the security forces cleared several villages including Kokchinar the bastion of Taliban militants in Baghlan-e-Markazi district of the northern Baghlan province on Monday, according to a Afghan Defence Ministry official. The Defense Ministry in a statement released here said 41 insurgents including five fighters loyal to the Islamic State group were killed in the country’s 16 out of 34 provinces on Saturday and Sunday.

According to the ministry, scores of militants were killed and countless others injured across the country since last week.Moreover, a total of 17 Taliban fighters were killed and 40 injured since the launch of government forces operations in Sozma Qala district of the northern Saripul province over the past three days, a senior army official told Xinhua on Monday.

Spokesman for Interior Ministry, Sediq Sediqi confirmed last week that the government forces have increased pressure against the militants as the Taliban leader Mullah Mansour’s death was confirmed which could have negative impact on the morale of the militants. Although Taliban new leader Mawlawi Haibatullah Akhundzada has yet to make statement on war or peace, his fighters in tit-for-tat strikes, have speeded up offensives against government interests, and according to the outfit’s website scores of security personnel were killed over the past week across Afghanistan.