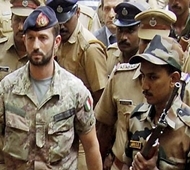 Rome: An Italian marine accused of killing two fishermen in India has returned home pending a ruling on where he should be tried in a long-running case that has soured ties between the two countries.

Salvatore Girone touched down in Rome yesterday after four years in India, where he was being held pending the resolution of a dispute between New Delhi and Rome over who has jurisdiction in the case.

His wife, children and father rushed onto the plane for an emotional reunion, after which he was met on the tarmac by Italy’s foreign and defence ministers, raising his clasped hands together in a sign of victory.

The newly reunited family was expected to travel straight on to Bari in southern Italy, where locals had planned a homecoming party.

Girone and fellow marine Massimiliano Latorre are accused of shooting the fishermen while protecting an Italian oil tanker as part of an anti-piracy mission off India’s southern Kerala coast in 2012.

Latorre was allowed to travel back to Italy in 2014 for treatment after suffering a stroke.

Girone had been barred from leaving but India’s supreme court agreed on Thursday to alter his bail conditions allowing him to return, after a tribunal in The Hague ruled this month he should be free to go, pending the final outcome of arbitration.

Italy initiated international arbitration proceedings in the case last year, referring the row to the Permanent Court of Arbitration (PCA) in The Hague and asking it to rule on where the men should be tried.

Under his new bail conditions, Girone must return to Delhi within one month if the PCA rules that he face trial in India.

Italy insists the oil tanker, the MV Enrica Lexie, was in international waters at the time of the incident.

India argues the case is not a maritime dispute but “a double murder at sea”, in which one fisherman was shot in the head and the other in the stomach.