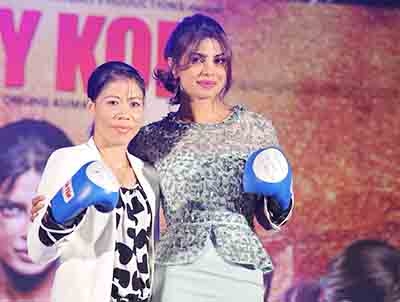 National Award winning actress Priyanka Chopra has been much appreciated for her role in the biopic ‘Mary Kom’. And interestingly, the actress had been supporting the Olympian and five time world champion boxer throughout her journey in the Asian Games. So when boxer MC Mary Kom made India proud by winning her maiden Gold at the Asian Games by defeating Zhaina Shekerbekova of Kazakhstan to win her first gold in Asian Games at Incheon, South Korea, actress Priyanka Chopra took to Twitter to express her elation and congratulated her ‘shero’.

“Yaaaaaay!!!Now that’s called Woman Power! #MaryKom gets gold..makes India Proud & shows us that we can achieve anything! #Momof3 #champion,” PC has posted on the micro blogging site. She further wrote, “So proud of u @mangtec u r a true champ!! My Shero! Be #Unbeatable Be #Unbreakable Be #MaryKom.”

Priyanka has always been vocal about how she feels related to the character and salutes Mary Kom’s spirit and determination. It’s noted that the actress had wished Mary Kom right before her natch too! Priyanka had tweeted, “One step away from a Gold medal at the #AsianGames2014 and @MangteC proves yet again that nothing can keep her down. #respect #MaryKom”.

And Priyanka wasn’t the only B-townie to come forward wishing Mary. Vishal Dadlani, who had sung two songs in the movie also praised the boxer for winning the gold saying, “Even prouder today, to have sung #ZiddiDil and #SalaamIndia in #MaryKom. What an athlete, what a champion! #MaryGOLD.” Whereas Kunal Kohli tweeted,  “Is #MaryKOM the only sportsperson in the world, to win a gold medal, before & after, a film was made on her?”