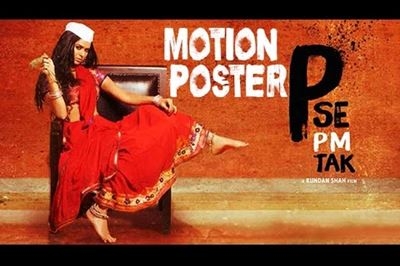 Kundan Shah has been floundering in the wilderness for quite a while. He hasn’t made any great film post ‘Jaane Bhi Do Yaaron’ and every time he comes up with a project it just tanks. This one has a kernel of interest going for it considering that it speaks about that much vaunted subject of corruption and dirty politics but protracted delays and releasing a few months  after Mallika Sheravat dampner ‘Dirty politics’ puts paid to any interest that could have been generated.

Attempted as a dark and grotesque political satire, this is supposedly an angry and vitriolic take on today’s political scenario. The central idea revolves around a 200 buck  prostitute who is penniless and on the run. She lands up in a small town where a by-election is being held and conveniently gets caught up in the political shenanigans taking place there. And yes she ends up becoming the CM…in just 4 days. And there’s that dead body climax that was the hallmark of Kundan Shah’s only genuine blockbuster ‘Jaane Bhi Do Yaaron’. Maybe he meant it as a signature stamp but it comes out more like a wannabe. It’s not original or interesting, not funny either  and there’s no newness to it. The entire plot is so similar to recently released and quickly forgotten  ‘Dirty Politics’  that you just wanna say ‘ no..Not Again!’

There’s really nothing to distinguish this film from Mallika Sheravat’s ‘Dirty Politics’ except for the cast. Familiar faces hog the roles of villainous politicians. Even newbie Meenakshi Dixit who is supposed to be having a good run down south doesn’t really make a mark here.