Koffee with Kangana? What are liberals doing to bring country out of pits, questions ‘Jhansi Ki Rani’ 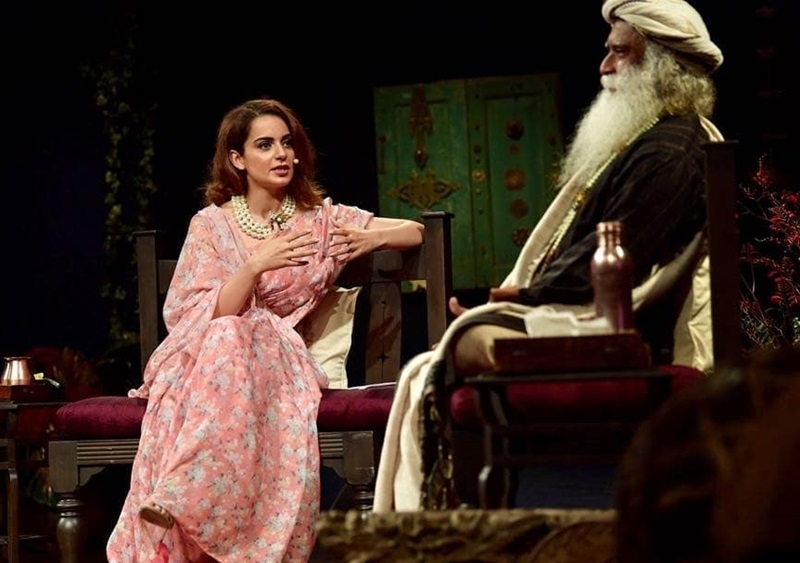 Earlier we reported of Kangana Ranaut’s spiritual adventure to Adiyogi where she channelled her pure and pious beauty on social media. She was also quoted in an interview, “I truly believe that if we as humanity could tap into the dimensions beyond the physical…into mysticism, we can transform the world.”

Furthermore, during a special screening of the film Chalo Jeete Hain, based on the early life of PM Modi, was held in Mumbai, she was seen batting for him for the 2019 Lok Sabha elections.

Her latest addition to what seems like a promising political career ahead was a rendezvous with Sadhguru Jaggi Vasudev, Indian yogi and mystic at NCPA Mumbai yesterday where she spoke about the rising cow vigilantism aka ‘gau raksha’ in the country.

She opened up about how a scene in her upcoming biopic, Manikarnika based on Rani Laxmibai, where the titular character is seen saving a cow, was changed since a crew member suggested that it would make them look like ‘cow saviours’. “There was a scene where Rani Laxmibai goes and saves a calf. Our crew had a huge discussion. We halted the shoot and then decided to replace the cow with a lamb because we don’t want to look like cow saviours.”

The Queen actress took a jibe at liberals in the conversation saying that they “are always criticising, and never wanting to protect cows.” Kangana seemed intent on posing ‘tough questions’ to Sadhguru. “Liberals are the people who won’t include you in their group unless you hate the same people as they do. If it’s for the betterment of the country, you don’t mind hating on the BJP. It’s fine to believe everything… whatever is happening is being practically done by Amit Shah. But what I don’t get is this — what are they (liberals) doing to bring the country out of the pits?”

Further questioning the liberal “agenda” Kangana also commented on the Kathua rape case and a section of Bollywood’s reaction to it. “When a war breaks, liberals are the first ones to say, in my industry people say ‘why should we be bothered with war, we are artistes,’ to demotivating an army man who is protecting the borders for you, a rape takes place in Kashmir and they say, ‘Hindustan raped our daughter,’ to be pointing fingers at each other when the country is so vulnerable and trying to break a civil war, is that what liberals do?”

While Kangana was determined in getting her answers from the knowledge maestro himself, let us know in the comments below of her take on taking a stand between being a conservative, liberal or a sceptic in today’s India.