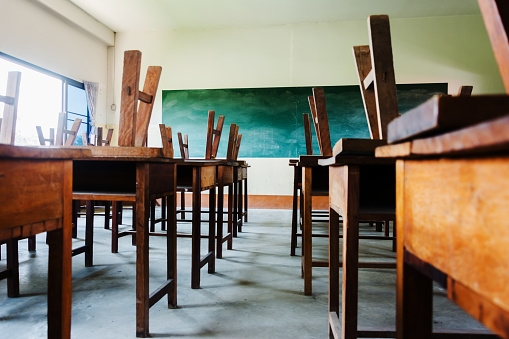 Academics and educational activists have long believed that a perception related to the quality of these schools as well as parents' attraction towards English medium schools is leading to reduced enrolment year after year. At the same time little is being done to revive these Marathi medium schools, activists have alleged.

Since the Right to Education Act, 2009 stipulates that schools cannot run without approvals, the department is pushing them to shut down. Bowing to the pressure, few have already started pulling down shutters; their students have been forced to transfer to other language schools. “With no aid or approval from the government, the schools don’t have the means to continue running,” said owner of a Marathi medium school. He added, “Teachers and principals are spending money from their own pockets to keep some of them afloat.”

In contrast, English medium schools are getting speedy approvals, the owners alleged. Girish Samant, a trustee of the AB Goregaonkar School run by Goregaon-based Shikshan Mandal trust, said: “The education department has now completely stopped grant approval to new Marathi medium schools. Some of these schools have been vying for permissions since 2012. Both BMC and the state government are on a campaign to save money. They seem to be least bothered about Marathi medium schools shutting down. Since the past decade, they have made things difficult for the management and staff of Marathi medium schools.

Sunil Shejule, who is a co-ordinator of Marathi Shala Sansthachalak Sangh and a member of Marathi Abhyaas Kendra alleged, that political parties like Shiv Sena have been campaigning forever on the issues of Marathi Manus, however, they have failed to revive and preserve Marathi medium schools. "Shiv Sena has failed miserably. They are rebranding civic schools by turning them into public schools while starting the CBSE curriculum. Why can't this be done with the medium of instruction being Marathi? Why only this degradation is being done with English medium schools? It is a sorry state that Marathi schools are declining in Mumbai. If the trend and pace at which the schools are shutting down continues, there will be no Marathi medium schools by the year 2030," Shejule said.

He added, "The Sunday's meeting is our appeal to all like-minded people to join us in our campaign to save Marathi Medium schools."

As per the data, 133 Marathi medium schools in Mumbai have shut down in the past decade.