To protect the jobs of Americans, will sign executive order to temporarily suspend immigration, says Trump

President Donald Trump has said that he will sign an executive order to temporarily suspend immigration into America, amid the coronavirus outbreak that has killed more than 40,000 people in the US, the country with the most fatalities in the pandemic.
Agencies 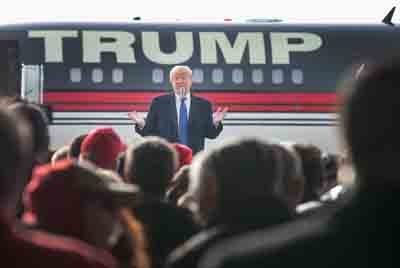 Will take advantage of the crash in oil prices to fill national stockpile: Trump

The number of people killed in the US due to COVID-19 has reached 42,094, according to Johns Hopkins University, and more than 750,000 cases have been confirmed.

"In light of the attack from the Invisible Enemy, as well as the need to protect the jobs of our GREAT American Citizens, I will be signing an Executive Order to temporarily suspend immigration into the United States!" Trump said in a tweet late on Monday night.

Details of the Trump's executive order were not immediately known. He also did not indicate when he will sign such an order.

While Trump talked about suspending immigration visa, the H-1B visa, which is more popular among Indian IT professionals, is a non-immigrant visa. But his reasoning that he needs to protect jobs of American citizens indicates that non-immigrant work visas too might be on his target.

The United States, due to coronavirus, has experienced a record layoff. As off last week, a record number of 22 million Americans have applied for unemployment benefits.

Trump has already closed the Northern and Southern border that attracts a large number of illegal immigrants. Travel restrictions and closing of consulate services in many countries including India are already having an impact on issuing of new H-1B visas.

Last month, the United States suspended all routine visa services around the world due to the global coronavirus pandemic.

Globally, more than 2.4 million people have been infected with the virus and over 165,000 killed, according to the the univeristy tracker. For the first time in history, US oil prices trade in the negative
Advertisement