This could power rural micro-entrepreneurship through clean energy

TP Renewable Microgrid (TPRMG), a 100% subsidiary of Tata Power has launched what could be termed as the world’s largest sustainability programme of renewable energy for rural areas. It has covered more than 186 villages, and plans to cover more than 10,000 villages in the next 6-7 years. Currently, much of the world is focused on Uttar Pradesh and Bihar and in Uttar Pradesh it has already touched over 10,000 households and gears itself up for more challenges in newer territories. It has just embarked on plans to take up similar projects in Odisha as well

The disparity between India’s urban and rural incomes has always hurt the rural sector. This often compels labourers to travel to cities to earn their livelihood. All this could change in the next few years as TPRMG expands its work on what could easily become the world’s largest programme of sustainable renewable energy for rural areas. It plans to electrify more than 10,000 villages in Bihar and Uttar Pradesh in the next 6-7 years.

To understand the uniqueness and enormity of the vision and work, Dominic Rebello and RN Bhaskar of FPJ spoke with Manoj Kumar Gupta, CEO, TPRMG. He explains how this initiative of Tata Power is aimed at ensuring rural economic development and promoting microenterprises. He cites the example of Rewana Village of Mitauli Block in Lakhimpur Kheri District of Uttar Pradesh. This village is now powered by green energy from TPRMG's Microgrid, thus establishing itself as the 1st Green Digital Smart Village of UP.

Given below are edited excerpts:

Manoj Kumar Gupta (MKG): Tata Power has been working for centuries in the area of generation, transmission and distribution. Hitherto, most of our activities have been confined to metro areas. We now desire to reach out to the bottom of the pyramid people. We have considerable experience in the distribution of power and we want to take that experience back to the rural customers in rural areas, because these are the places where there is a lot of scope of these changes.

The approach we adopted is development through energy access. We are convinced about the transformative power access to electricity provides. We have seen how -- in the past in any of the area -- when water, road, electricity reaches that area they transform it. With today's digital access through communication channels, the potential for total transformation is phenomenal. Therefore, Tata Power launched a special initiative called TP Renewable Microgrid, a separate company which has been formed to take care of this particular task of reaching out to the bottom of the pyramid people. 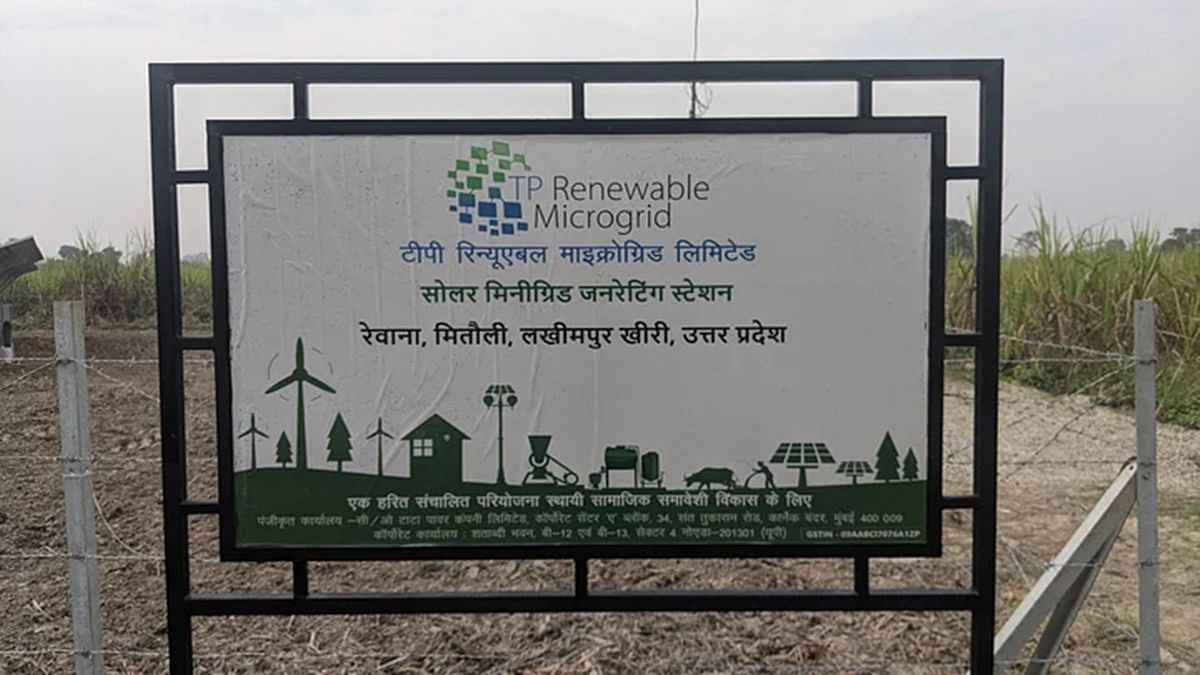 What is the microgrid?

This 30kW Microgrid project harnesses energy from the sun using solar panels. We set this up as a community project, serving a cluster of households. The microgrid has a battery as an energy storage system. For the backup power supply, a DG-set (a diesel generator set) has been installed in the Microgrid itself, enabling a 24x7 power supply to the community. The company provides a cheap and reliable power supply through an off-grid AC Microgrid solution.

In the conventional system, power from the main substation is transferred via over lines cables that reach individual villages and from there power is distributed to individual houses. This is very long distribution network and many times power supply gets disrupted or there are breakdowns because of human issues, due to natural calamities, power theft and other things

With TPRMG's Microgrid power supply, all these vagaries are automatically removed, It is a mini generating plant, which is set up to feed the power supply within a radius of two and a half to three kilometers. Thus transmission costs get reduced. All our wires are insulated, to prevent illegal tapping into them to seal electricity.

Since most rural households are poor, they cannot afford the capital costs of installing solar systems and then maintaining its support equipment. A community approach allows them to access power without incurring capital costs or worrying about maintenance. Each community setup caters to almost 150 to 200 odd customers including the base load. We then encourage them to set up locally relevant mini enterprises like atta chakki (flour mill), oil expellers, etc. We have demonstrated to the people that this solar power can also run their big machines as high as 7.5 to 12 kilowatts. These types of things are being carried out and it has been a successful model as of now.

The mini enterprises allows people to pay for the electricity and improve their lifestyles as well. 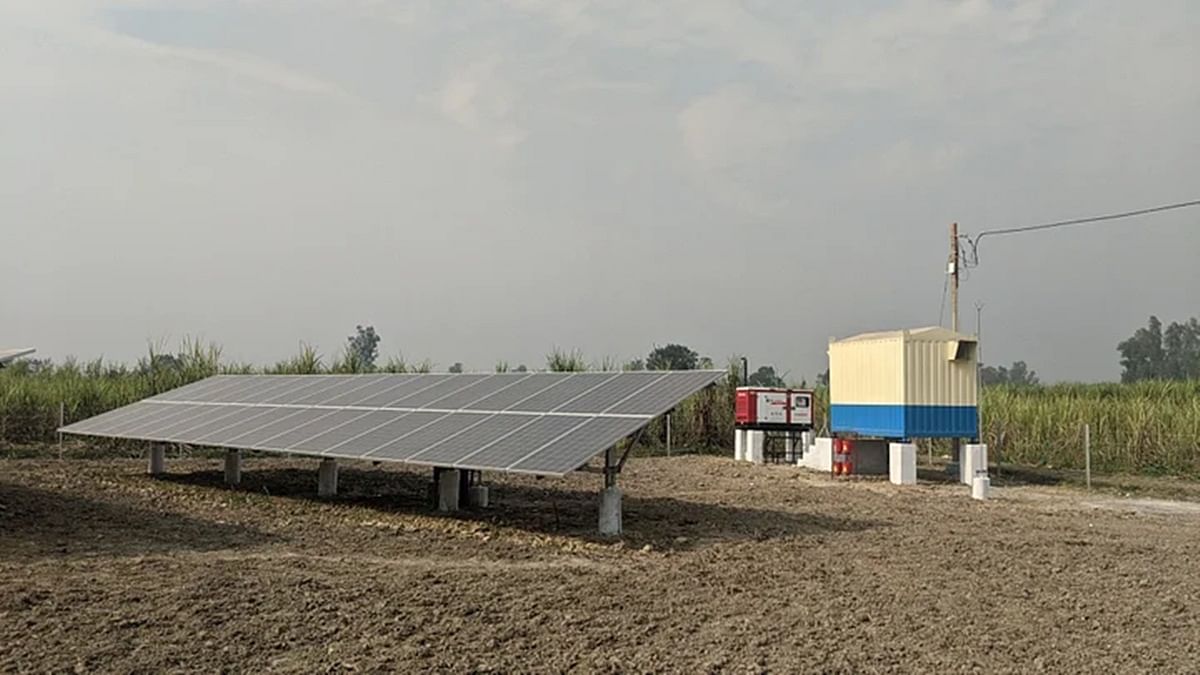 The project is very ambitious project and it will be one of the world's largest programmes. The company so far has electrified more than 165 through its microgrids. Collectively, we have touched and influenced over 10,000 households. Some of these customers are big players. For instance, our micrgrids supply energy to mobile phone towers, which also need electricity.

Since long transmission lines through the main grid proves to become expensive, unviable and unreliable, these towers find that accessing electricity through these microgrids is easier and better. We hope to use these experiences to scale the project and leapfrog into covering larger populations.

Women are agents of change and to enable that, during the past three months, TPRMG has launched a special scheme to provide microgrid supply to women entrepreneurs. More than 1,500 women have taken advantage of this particular scheme and they are using it for various jobs like that of beauticians, doing embroidery work, making bangles redoing shops which are better lit, etc. A better lit shop attracts more customers than poorly lit shops.

We thought of ways to help villages to think of ways in which they could use electricity to do things by themselves. For example, when we were talking to this village, we realized there are few people woman -- who were part of a self help group -- who have skills relating to embroidery work. They hardly earned Rs 200 a day because they did things manually and it took them around two weeks. So we asked them whether there was a lack of orders? They said if we can finish the work soon we can get the next order immediately. So we said to them, why don't you use an electric sewing machine. The same tasks could be completed in two or three days. And then the churn happened.

So, this is how we are helping women to earn more through electricity because electricity is an enabler over here. Not only this, we also realized that in villages there are many weddings, where they serve food on plates made of leaves. So some women got together and with the help of the state government, they created a banana leaf plate-making machine. More than 15-20 women are employed there and they are getting electricity from the microgrid power supply. So this village Rewana is going to be sort of a torchbearer for such initiatives. While in other areas also we have seen various government schemes are coming through, we believe that transformation can be achieved. And while electricity is an important factor, entrepreneurship is the thing which will go a long way. Involving women is often the best way to do that.

Lighting up of Lives

TPRMG team recently released power supply to two families of lower economic strata in Bijuwa Block of Lakhimpur Kheri, UP. After a long 35 years of darkness, the hutments of these families were lit up with electric supply from the microgrid. The whole village has now been transformed after the continuous supply of electricity as there is less noise and air pollution caused by diesel gensets.

We have enabled and encouraged them to purchase electric motors which are powered through energy provided by the microgrid. And now the villagers can run this business with continuous power supply. This helps them save on water – they do not have to keep their pumps in the power on position all the time, waiting for power shut downs to end which was the case with the conventional grid connectivity. We have encouraged them to sell surplus water to neighbouring farms. They save on noise and air pollution as well.

Earlier, in rural communities, distribution cables were naked wires. People used to string wires across these lines and steal power. This led to electrical accidents as well. So, TPRMG brought in a change in the design concept itself to take care of the requirements. Today all the distribution lines of TPRMG are insulated so that hooking is discouraged. All of our systems are remotely monitored and controlled. We are in total control of the plant. We can remotely see and if there is any untoward incident we can operate and stop the plant. To take care of theft, we have automatic alarm systems, which will trigger alerts for a local level as well as for our remote operations staff, who will come to know that there is something wrong going on.

The model that TPRMG has created on the field is owned by Tata Power and installed in the center of the village. While the erecting and commissioning is done by the Tata Power Solar team of Tata Power, the microgrids are operated and maintained by TPRMG and this is where the key USP which we are bringing on the table is that for the next 25 years, these microgrids will continue to supply power to that village.

TPRMG is complementing state governments in their endeavor to provide uninterrupted power supply to the rural community. The company is part of the Green Digital Smart Village initiative of the Government of Uttar Pradesh. This initiative of Tata Power is aimed at rural economic development and microenterprise promotion.

Rewana Village of Mitauli Block in Lakhimpur Kheri District of Uttar Pradesh is powered by Green Power from the TPRMG's microgrid. We released supply to Rewana village on October 20, and today we have more than 100 plus customers in that village and within 10 days, so, we could realize that there is a lot of support from the state government. Rewana has become the 1st Green Digital Smart Village of UP. Our customers include a few microenterprises and women self help groups who have discovered new income generation opportunities,

Let me compliment the state government for helping us create such infrastructure and helping us collaborate with various stakeholders to provide solutions. Tata Power is happy to be part of this journey.

We have just begun similar activities in Odisha. Our teams are working with locals to find out the types of microenterprises best suited for that environment. One use is micro chillers which can store fish and milk. Another is the use of simple machines which help them make products out of forest waste. We are still exploring possibilities. Once again, we have received tremendous support from the state government.

People too has realised that in disaster prone areas – like those plagued with cyclones – solar is the fastest route to recovery. It can be set up in hours. It also helps the marginalised communities find new ways to earn more.

Stellantis to shut Jeep plant in US, lay off 1,200 in EV era