Sri Lanka's Prime Minister Ranil Wickremesinghe on Saturday offered to resign as the Opposition demanded his resignation and that of embattled President Gotabaya Rajapaksa to make way for an all-party government, hours after thousands of anti-government protesters stormed into the President's House and occupied it amidst the country's worst economic and political crisis.

His office said that Wickremesinghe will continue as Prime Minister until then.

Wickremesinghe told Opposition party leaders that he was taking the decision to step down as the island-wide fuel distribution is due to recommence this week, the World Food Programme Director is due to visit the country this week and the debt sustainability report for the International Monetary Fund is due to be finalised shortly.

So as to ensure the safety of the citizens, Wickremesinghe, 73, said he is agreeable to this recommendation by the Opposition party leaders.

Wickremesinghe was appointed the Prime Minister after anti-government protests forced the resignation of then prime minister Mahinda Rajapaksa, the elder brother of President Gotabaya Rajapaksa, in May.

His decision came hours after thousands of irate anti-government protesters stormed into President Rajapaksa's official residence in central Colombo's high-security Fort area after breaking the barricades, as they demanded his resignation over the island nation's worst economic crisis in recent memory.

At least 45 people, including seven security personnel, were injured in clashes between security forces and the protesters - some of them holding Sri Lankan flags and helmets - who had gathered in large numbers in the Fort area, demanding President Rajapaksa's resignation.

Rajapaksa, who was facing calls for resignation since March, was using the President's House as his residence and office since protesters came to occupy the entrance to his office in early April.

According to sources, the 73-year-old President had been moved out of his residence on Friday, in anticipation of Saturday's protests. His whereabouts were unknown as protesters have now occupied both his office and official residence.

Some video clips showed scores of people taking a dip in the presidential palace pool.

Amidst the turmoil, Wickremesinghe summoned an emergency meeting of all political parties and also requested the Speaker to summon Parliament.

During a meeting summoned by Speaker Mahinda Yapa Abeywardena, political party leaders pressed for an all party government while calling for President's resignation.

The main Muslim party leader Raul Hakeem told reporters that party leaders wanted both President Rajapaksa and Prime Minister Wickremesinghe to resign and Speaker Abeywardena to become acting president as per the Constitution.

The Constitution stipulates under article 40C that the Prime Minister must act as the President until Parliament could appoint an acting president within one month of president vacating office.

However, the Opposition is opposed to Wickremesinghe becoming interim president as he was not elected by the people. He entered Parliament as an appointed member having failed to win a seat in the parliamentary election held in August 2020.

Meanwhile, President Rajapaksa's whereabout are still not known. The Prime Minister's office said he had contacted the Prime Minister to say that he would agree to abide by the decisions made by the party leaders.

Sources from the Speaker's office said he would officially write to both president and prime minister calling for their resignations as it was the consensus at the party leaders' meeting.

Sri Lanka, a country of 22 million, is under the grip of an unprecedented economic turmoil, the worst in seven decades, crippled by an acute shortage of foreign exchange that has left it struggling to pay for essential imports of fuel, and other essentials.

Protesters blame Rajapaksa for the country's economic malaise, the worst since independence in 1948.

Last week, Wickremesinghe announced in Parliament that Sri Lanka would present a debt restructuring programme to the IMF by August to secure a bailout package while underlining that the negotiations with the global lender were more complex and difficult than in the past because the country was "bankrupt".

The country, with an acute foreign currency crisis that resulted in foreign debt default, had announced in April that it is suspending nearly USD 7 billion foreign debt repayment due for this year out of about USD 25 billion due through 2026.

Saturday's protest is the biggest protest yet to sweep Sri Lanka. The protesters also clashed with the railway authorities in provincial towns of Galle, Kandy, and Matara as the demonstrators forced authorities to operate trains to Colombo.

Large contingents of police, special task force, and the Army had been deployed around the area.

The organisers of the movement 'Whole country to Colombo' said people were walking from the suburbs to join the protesters at Colombo Fort.

Protesters said they will not relent until Rajapaksa quits the presidency.

Meanwhile, US Ambassador to Sri Lanka Julie Chung on Friday urged the country's military and police to allow peaceful protests.

"Violence is not an answer... Chaos & force will not fix the economy or bring the political stability that Sri Lankans need right now," she tweeted. 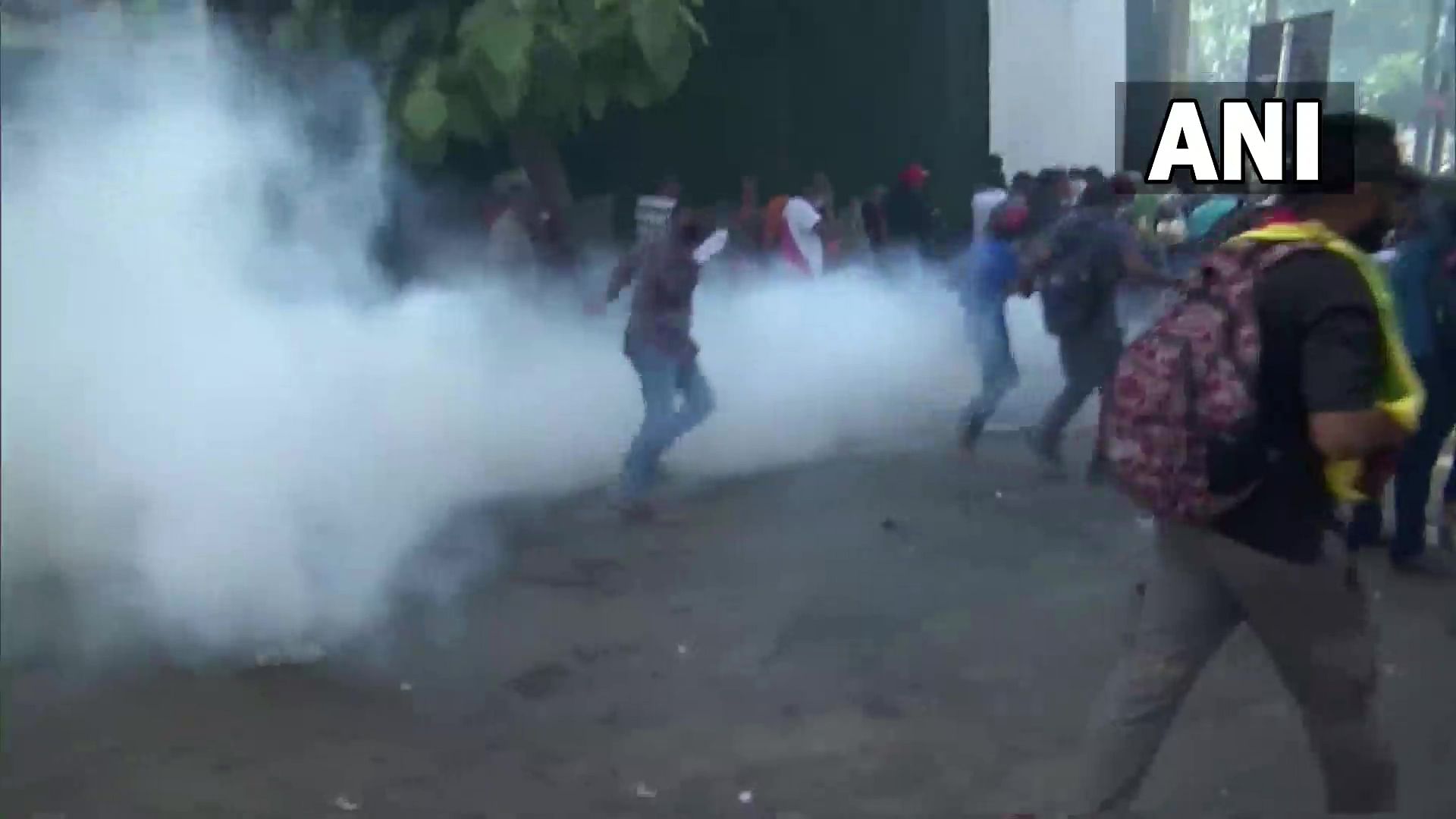