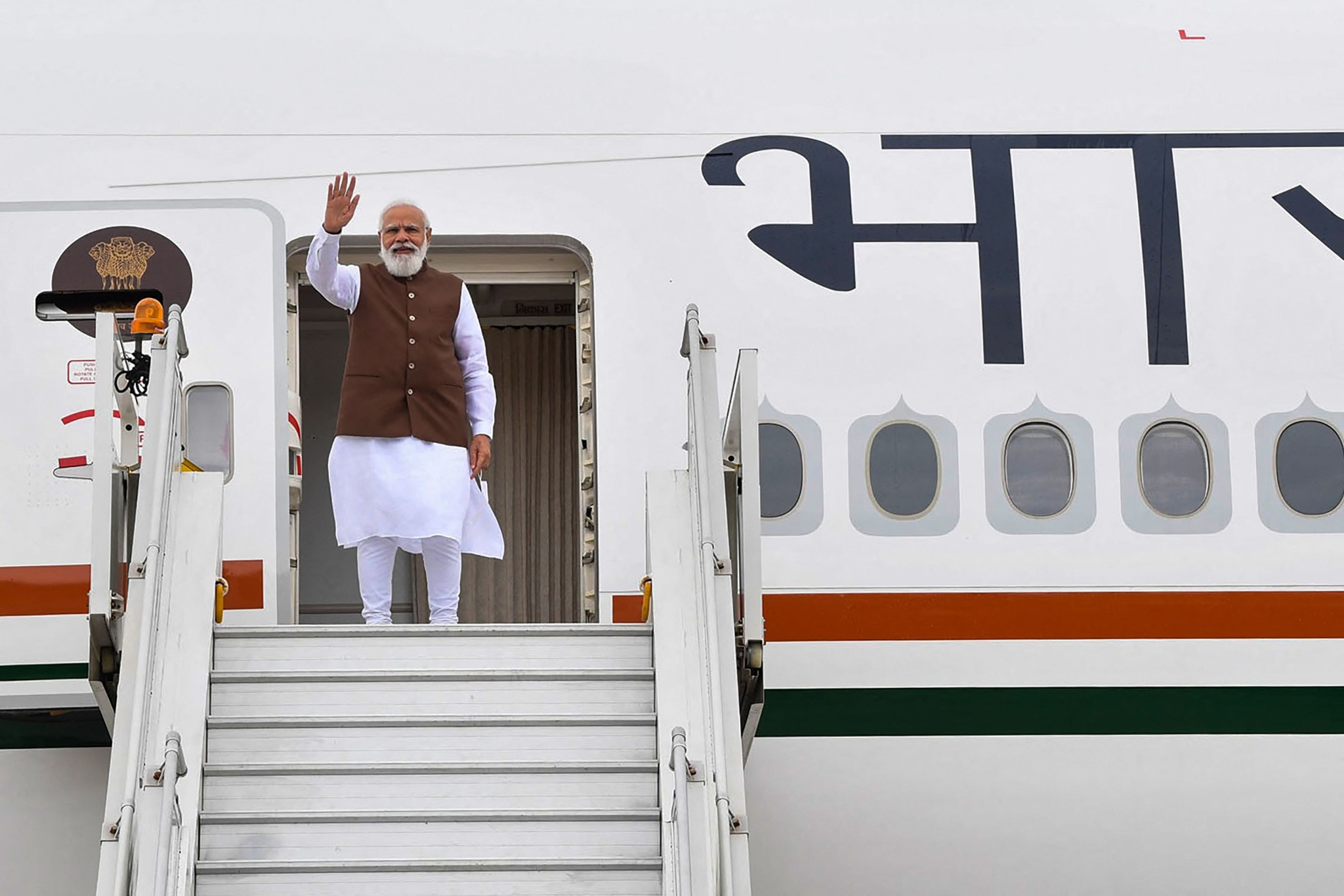 Prime Minister Narendra Modi has said he would highlight economic opportunities in India during his meetings with CEOs here.

On Thursday, the prime minister is scheduled to hold one-on-one meetings with top five American CEOs.

Two of them are Indian Americans -- Shantanu Narayen from Adobe and Vivek Lall from General Atomics. The three others being Cristiano E Amon from Qualcomm, Mark Widmar from First Solar, and Stephen A Schwarzman from Blackstone.

"Landed in Washington DC. Over the next two days, will be meeting President Joe Biden, Vice President Kamala Harris, Prime Ministers Scott Morrison from Australia and Yoshihide Suga from Japan," he tweeted.

"Will attend the Quad meeting and would also interact with leading CEOs to highlight economic opportunities in India," he said.

The prime minister's meeting with American CEOs from five different key areas is reflective of the priorities of his government.

While Narayen reflects the IT and digital priority that the Indian government is pushing for, Modi's meeting with Lall is significant as General Atomics is not only the pioneer in military drone technologies but also the world's top manufacturer of state-of-the-art military drones, which the US shares only with its key allies and partners.

India is in the process of procuring a significant number of drones for the three branches of its armed forces. It has also leased a few drones from General Atomics.

Jakarta-born Vivek Lall, now based out of California, for over a decade has been instrumental in major bilateral defence deals worth around $18 billion, as India and the US take steps to forge a new relationship in which defence trade is a key pillar.

The meeting with chip giant Cristiano Amon assumes significance, given India's push for the 5G technology to be safe and secure.

A world leader in 3G, 4G, and next-generation wireless technology innovations for more than 30 years, Qualcomm is now pioneering its way to 5G with a new era of intelligent products that are revolutionising industries, including automotive, computing, and IoT.

India is looking for a major investment from Qualcomm.

As India is taking gigantic steps in the use of solar power to meet its energy needs, the meeting with Mark Widmar is important as First Solar is a leading global provider of comprehensive photovoltaic ("PV") solar solutions, which use its advanced module and system technology.

Early this summer, the Arizona-based company announced to add 3.3 GW of capacity in a new facility in India at an estimated cost of $684 million.

Stephen A. Schwarzman is Chairman, CEO and Co-Founder of Blackstone, one of the world's leading investment firms investing capital on behalf of pension funds, large institutions and individuals.

In March this year, Blackstone announced that funds managed by Blackstone Real Estate have acquired Embassy Industrial Parks from Warburg Pincus and Embassy Group, in one of India's largest logistics transactions.