J K Rowling’s The Ickabog, a fairytale for kids, features illustrations crowdsourced from children all over the world — four of whom are from India

The Ickabog, a fairytale for children, by J K Rowling is finally out in print. Rowling, who conjured up the magical world of Harry Potter over 20 years ago, brought Ickabog to life during the lockdown. The chapters from the book were put up on social media platforms and The Ickabog’s official website during the lockdown months on a weekly basis — providing a much-needed break from boredom for children, and adults alike.

The Ickabog, set in the imaginary kingdom of Cornucopia, is packed with larger-than-life characters, unforgettable events with takes about the power of friendship and hope — a story, like the Harry Potter series, the young and old would want to revisit again and again. But, what sets the The Ickabog apart from may be some other children’s books is that the illustrations have been crowdsourced from children from all over the world, and have been actually used in the book. Rather than a professional illustrator, it is children, some as young as seven-years-old, who have brought to life not just the characters, but every significant aspect of the story to life (be it a King George or even something as simple as a tea cup or a fire place).

The book features four illustrations from Indian kids — Aria (7) Aron (7), Divyanshi (8), and Divymaan (10). And, who wouldn’t be excited to get featured in a popular author like Rowling’s book, right? Speaking about the idea of getting children on board, Hilary Murray Hill, CEO, Hachette Children’s Group, said, “It was J.K. Rowling’s idea to run a competition for children to illustrate The Ickabog. Over seven weeks in the Summer, as Jo released new instalments of the story and illustration themes, children, aged seven to 12, from the UK, Ireland, Australia, New Zealand, and India drew, painted and created more than 18,000 pictures and their parents entered the competition for a chance for their child’s artwork to be published in the printed book. The quality, diversity and sheer imagination of the children’s art was a privilege to see, and a tremendous task to judge. The panel debated between detailed illustrations and expansive, bold paintings, between exotic peacocks, lavishly dressed kings and delicious cakes, and reviewed work, which has clearly taken many hours to create from the youngest of the entrants. It has been wonderful to see children excited and inspired by J. K. Rowling’s story to create distinctive works of art. The winners truly deserve their unique prize, but all the entrants should be praised for their skill, thought, creativity and effort. I have no doubt there are some great artists of the future among them.” 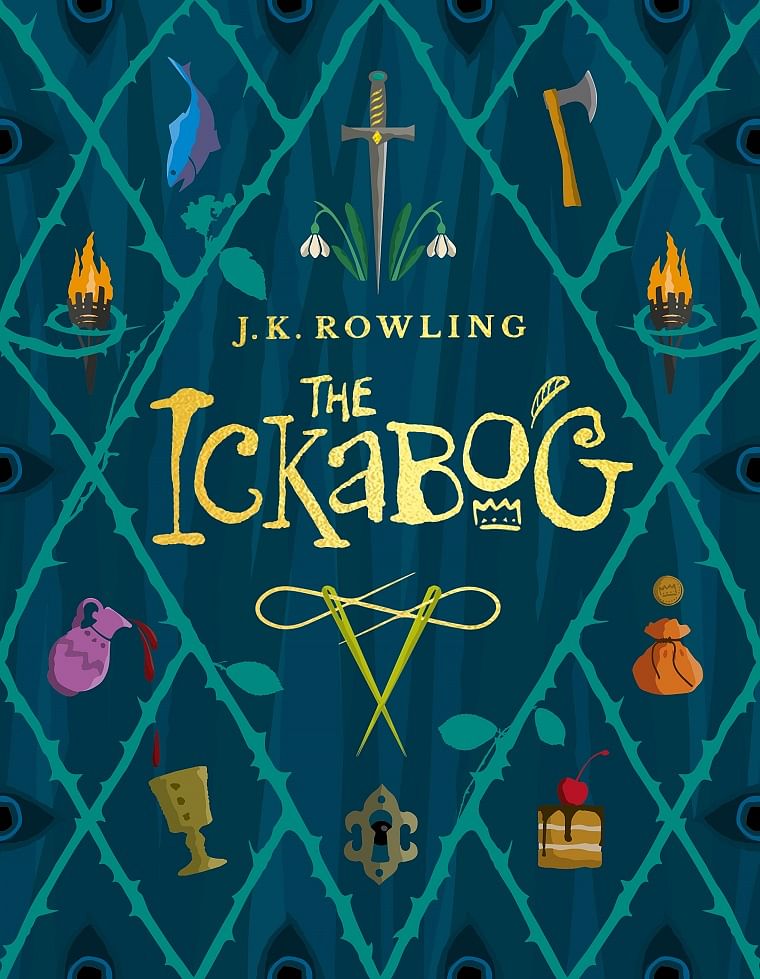 Understanding how hard the lockdown was on children, Rowling decided to bring out The Ickabog, which she had dumped in the attic some years ago. “I had the idea for The Ickabog a long time ago and read it to my two younger children chapter by chapter each night while I was working on it. However, when the time came to publish it, I decided to put out a book for adults instead, which is how The Ickabog ended up in the attic. I became busy with other things, and even though I loved the story, over the years I came to think of it as something that was just for my own children. Then, in the Spring of 2020, lockdown happened. It was very hard on children, in particular, so I brought The Ickabog down from the attic, read it for the first time in years, rewrote bits of it and then decided to publish it online for children stuck at home. I also thought how wonderful it would be if children on lockdown illustrated the story for me, and so we launched the Ickabog illustration competition, run by my publishers around the world,” reads Rowling’s note on The Ickabog website.

“I feel very happy and little lucky because so many children across the world will see my drawing.” -DIVYMAAN

“I was very happy to win the Ickabog competition. This was an adorable moment in my life. It was a new experience reading a book and bring characters on paper. I am eagerly waiting for the book to be published. I am very excited to get the book with my illustration.” –DIVYANSHI

“I am extremely happy and my win has been the only good news during this lockdown! The Ickabog has made me love reading and painting more than ever!” –ARIA

“Thanks to the almighty. Wining the competition where more than 18K contestant has attended gives a different feel altogether. This was an unexpected and surprise winning, I was very tensed on the day of result announcement. Actually, it was my birthday when the result was announced, so this is one of the best and unforgettable birthday gifts. Thanks a ton for the opportunities given and the way this whole competition was handled. I dedicate this one to my grandmother, I have won this because of her blessing.” –ARON

Read Also
The India-Israel connect: A journey of flavours and spices