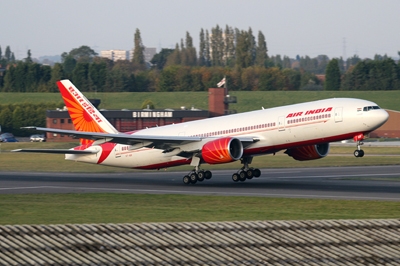 London : An intoxicated passenger on an Air India flight from India to Birmingham was slapped with a hefty 1,000 pound penalty for urinating in the aisle, shocking the crew and sparking angry protests from other passengers.

Jinu Abraham, 39, who was travelling with his 10-year-old son, was handcuffed and restrained with seat belts and arrested when the flight landed in Birmingham on January 19 and later fined 300 pounds by the Birmingham Crown Court. During the flight, he had become aggressive after drinking alcohol, declining crew’s request to get back to his seat. The airline was not available for comments on the incident.

“About 40 minutes prior to landing he removed his trousers and stood in the aisle. He pulled down his boxer shorts and then began urinating on the floor and seat of the aircraft,” John Cardiff, the prosecuting lawyer, told the court.

“He was restrained by crew with plastic handcuffs and seat belts for the rest of the flight and was arrested on landing.” When questioned, Abraham later said he had drunk two whiskies, that he was on anti-depressants and he could not remember anything about his actions, the Birmingham Mail reported.

Abraham’s lawyer Alan Newport said that there was a mix up at the airport in India which had led to his medication being placed in the hold. “He was without medication and nervous about flying and was concerned about his wife’s welfare,” he said. It was Abraham’s efforts at self-medicating that went wrong, he said. “He was shocked and surprised about what was said about his behaviour. He accepts it must have been incredibly upsetting for passengers and crew and possibly frightening for those people on board in that confined environment,” Newport said.