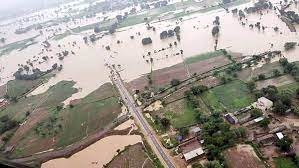 BHOPAL: As many as 200 people, including children, were airlifted from Sonda village of Guna in a joint effort of MP and Rajasthan government on Saturday morning. Parvati, which is in spate between Rajasthan and Guna, had turned Sonda village into an island. A team led by Collector Frank Noble A and SP Rajiv Mishra flew to Chhabra-Bhuakhedi village of Rajasthan to take stock of situation. Later, army helicopter was roped in to rescue stranded people and shift them to Bhuakhedi village in Rajasthan. Food and daily amenities have been provided to flood-affected people. Collector Frank Noble A, told FP, “Guna administration requested Baran collector to send NDRF team as state’s SDRF was unable to reach the village. We rescued 200 stranded people. This year, Parvati rose at an alarming rate.”

1,200 rescued: Around 1,200 people were rescued in Vidisha in last 24 hours. 700 were rescued from Sironj tehsil and 500 from Kurwai Tehsil. Administration pressed SDRF teams for rescue operations. Twenty villages were flood-affected in Sironj and eight in Kurwai. Collector Dr Pankaj Jain has ordered relief package to flood victims.