What is Joe Biden's plan on H-1B visa, green cards and citizenship and how will it benefit Indians? 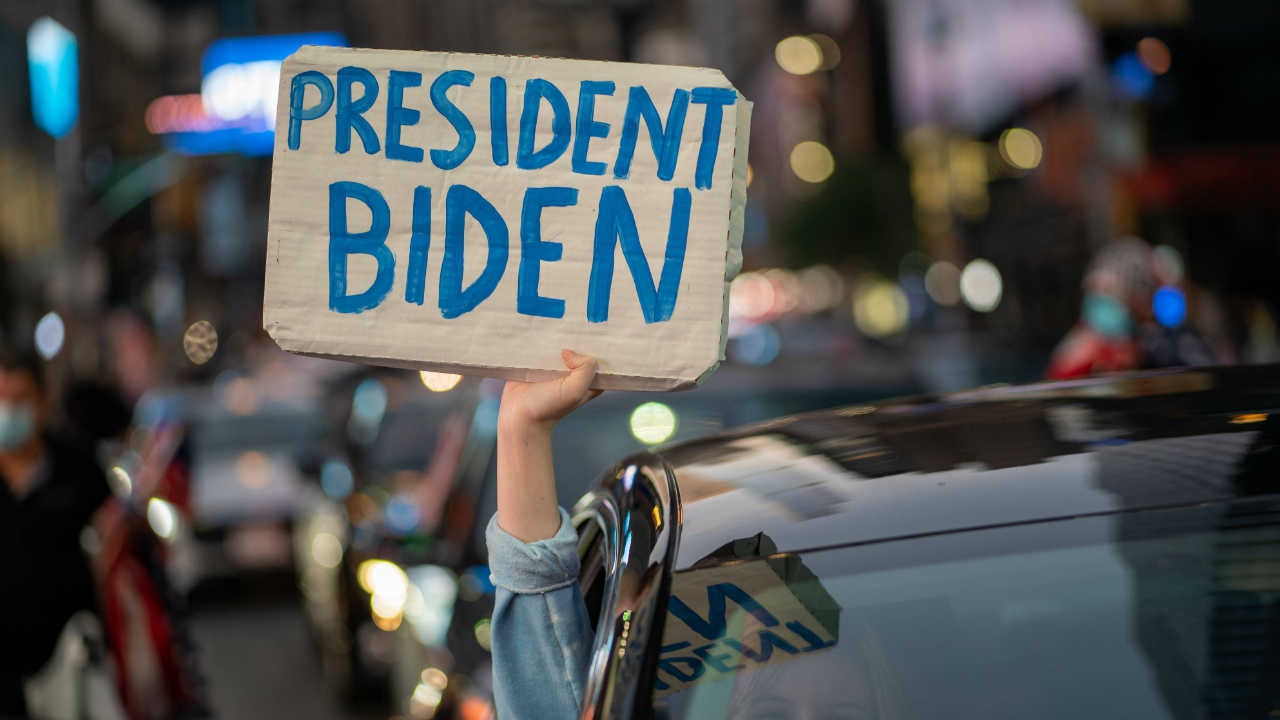 People celebrate in the streets in Times Square on November 7, 2020 in New York City | AFP

With Joe Biden's triumph over incumbent US President Donald Trump in a divisive, bitter and closely-fought presidential election, eyes are now set on his decisions which may overturn incumbent Donald Trump's hardline approach on various issues.

The 77-year-old Democrat, who became the oldest man ever to be elected to the White House, will be the 46th president of the United States.

The biggest difference between a Biden administration and that of Trump's may be on immigration. A relaxed visa and citizenship rule may benefit Indians who form a major chunk of skilled workforce in the US.

According to a policy document issued by the Biden campaign, he plans to increase the number of high-skilled visas, including the H-1B, and eliminate the limit on employment-based visas by country. He will also work towards providing a roadmap to American citizenship for nearly 11 million undocumented immigrants, including over 500,000 from India, and will also establish a minimum admission number of 95,000 refugees annually.

With Kamala Harris as his deputy, Biden is expected to reverse the move of the outgoing Trump administration to revoke work permits to the spouses of H-1B visas, which had adversely impacted a large number of Indian families in the US.

These decisions are expected to benefit tens of thousands of Indian professionals impacted by some immigration policies of the outgoing Trump administration.

1. "He (Biden) will immediately begin working with Congress to pass legislative immigration reform that modernises our system, with a priority on keeping families together by providing a roadmap to citizenship for nearly 11 million undocumented immigrants -- including more than 500,000 from India," the Biden campaign policy document said.

2. The Biden administration will support family-based immigration and preserve family unification as a core principle of the US' immigration system, which includes reducing the family visa backlog, it said.

3. "And, he will increase the number of refugees we welcome into this country by setting the annual global refugee admissions target to 125,000 and seek to raise it over time commensurate with our responsibility, our values, and the unprecedented global need. He will also work with Congress to establish a minimum admissions number of 95,000 refugees annually," the policy document said.

4. Biden will remove the uncertainty for Dreamers by reinstating the DACA (Deferred Action for Childhood Arrivals) programme and explore all legal options to protect their families from inhumane separation. And, he will end workplace raids and protect other sensitive locations from immigration enforcement actions, it said.

5. Biden will also restore and defend the naturalisation process for green card holders, the policy document said. Employment-based visas, also known as green cards, allow migrants to gain lawful permanent residence in the US in order to engage in skilled work.

6. "He (Biden) will increase the number of visas offered for permanent, work-based immigration based on macroeconomic conditions and exempt from any cap recent graduates of PhD programmes in STEM (science, technology, engineering and math) fields," it said.

7. "He will support first reforming the temporary visa system for high-skill, specialty jobs to protect wages and workers, then expanding the number of visas offered and eliminating the limits on employment-based green cards by country, which have kept so many Indian families in waiting for too long," the document stated.

8. "Biden believes that foreign graduates of a US doctoral programme should be given a green card with their degree and that losing these highly trained workers to foreign economies is a disservice to our own economic competitiveness," it said.

9. The Biden administration, it said, will also repeal President Donald Trump's "Muslim ban". President Trump had imposed a controversial travel ban, often referred to by critics as a "Muslim ban", on several Muslim majority countries, including Iran and Syria, through a series of executive orders.

10. "Biden will rescind Trump's 'Muslim ban' on day one and reverse the detrimental asylum policies that are causing chaos and a humanitarian crisis at our border," the policy document said.

11. "High skilled temporary visas should not be used to disincentivise recruiting workers already in the US for in-demand occupations. An immigration system that crowds out high-skilled workers in favour of only entry level wages and skills threatens American innovation and competitiveness," it said.

12. "Biden will work with Congress to first reform temporary visas to establish a wage-based allocation process and establish enforcement mechanisms to ensure they are aligned with the labour market and not used to undermine wages. Then, Biden will support expanding the number of high-skilled visas and eliminating the limits on employment-based visas by country, which create unacceptably long backlogs," it said.

14. The Biden administration plans to create a new visa category to allow cities and counties to petition for higher levels of immigrants to support their growth.

15. "The disparity in economic growth between US cities, and between rural communities and urban areas, is one of the great imbalances of today's economy. Some cities and many rural communities struggle with shrinking populations, an erosion of economic opportunity, and local businesses that face unique challenges.

16. "Others simply struggle to attract a productive workforce and innovative entrepreneurs. As president, Biden will support a programme to allow any county or municipal executive of a large or midsize county or city to petition for additional immigrant visas to support the region's economic development strategy, provided employers in those regions certify there are available jobs, and that there are no workers to fill them," the policy document said.

17. The holders of these visas would be required to work and reside in the city or county that petitioned for them, and would be subject to the same certification protections as other employment-based immigrants, it argued.

18. According to the policy document, Biden believes that keeping families together and allowing eligible immigrants to join their American relatives on US soil is critically important, but the current system is poorly designed with per-country caps that prevent applications from being approved in a timely fashion.

19. That means approved applicants may wait decades to be reunited with their families, it said.

20. "As president, Biden will support family-based immigration by preserving family unification as a foundation of our immigration system; by allowing any approved applicant to receive a temporary non-immigrant visa until the permanent visa is processed; and by supporting legislation that treats the spouse and children of green card holders as the immediate relatives they are, exempting them from caps, and allowing parents to bring their minor children with them at the time they immigrate," the policy paper said.