Prime Minister Narendra Modi has set forth a policy of "5Ts" -- Tradition, Technology, Trade, Trusteeship, Talent -- during his meeting with US President Joe Biden for a decade of transformational partnership
FPJ Web Desk 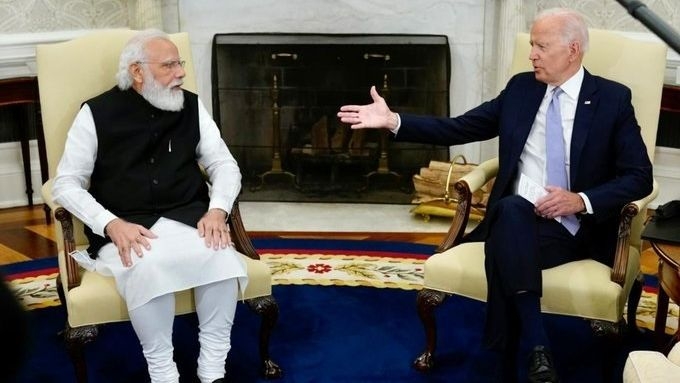 Washington: The world's largest democracies, India and the US, are committed to taking on the toughest challenges together, said President Joe Biden after his meeting with Prime Minister Narendra Modi at the White House.

The meeting of the two leaders in the Oval Office of the White House on Friday lasted for more than 90 minutes, instead of the scheduled 60 minutes.

"This morning, I hosted Prime Minister Modi at the White House as we launch a new chapter in the history of US-India ties. Our two nations are the largest democracies in the world, and we're committed to taking on the toughest challenges we face - together," Biden said in a tweet along with a picture of shaking hands with Modi.

Prime Minister Modi said he had an "outstanding" meeting with US President Biden.

"His leadership on critical global issues is commendable. We discussed how India and the USA will further scale-up cooperation in different spheres and work together to overcome key challenges like COVID-19 and climate change," he said.

Later while briefing the media, Foreign Secretary Harsh Vardhan Shringla said that the two leaders acknowledge that the comprehensive global strategic partnerships between two countries are strongly anchored in a shared commitment to democratic values and common strategic interests.

"It was a meeting which is characterized by warmth and cordiality. It was both productive and timely," he said.

Noting that the discussions were wide-ranging, he said that both leaders emphasised on combating the COVID-19 crisis and briefed each other on their experiences in dealing with the pandemic.

Shringla said the prime minister expressed thanks for the solidarity shown by the US government and people in the United States when India had a second wave of the crisis, and the support India received for that time.

Prime Minister Narendra Modi has set forth a policy of "5Ts" -- Tradition, Technology, Trade, Trusteeship, Talent -- during his meeting with US President Joe Biden for a decade of transformational partnership between New Delhi and Washington, said Shringla.

Tradition stands for democratic traditions and values the two countries share, he explained.

Technology, the most important driving force in the world, has a particular role in US-India relationship.

Given the strong complementarities between Indian and US markets, increasing bilateral trade was a priority.

Trusteeship is the concept to deal with emerging global challenges of climate change, and as the concept is understood in India, the planet is held in trust for future generations.

Talent signifies the people to people link between the "two countries, which is manifested by the contributions made by the Indian American community".

"President Biden also appreciated India's role as a country that extended assistance to countries across the world, including through pharmaceuticals and vaccines," he said.

Biden was also very impressed with the government's approach and the steps taken by the Government of India to deal with the second wave and the level of recovery, Shringla said.

Later in a fact sheet, the White House said the United States and India are committed to values of freedom, pluralism, openness, and respect for human rights.

Inputs from PTI and IANS Quad leaders urge Taliban to provide safe passage out of country: All you need to know about Prime...
Advertisement