US President Joe Biden pledges to halve greenhouse emissions by 2030

Biden focussed on the job creation aspect of addressing the climate crisis, suggesting he sees "an opportunity to create millions of good-paying middle-class union jobs." "When I talk about climate, I think jobs. Within our climate response lies an extraordinary job creation and economic opportunity ready to be fired up, Biden said, going on to urge investment in infrastructure. German Chancellor Angela Merkel welcomed President Biden's commitment to cut his country's greenhouse gases by as much as 52% by 2030. | AFP

Laying out his vision for a greener economy, US President Joe Biden on Thursday announced that the United States would cut its greenhouse gas emissions by half by 2030 as part of the country's efforts to combat climate change.

According to CNN, in an address opening 'Leaders Summit on Climate', Biden laid out his vision for a greener economy in which climate change is taken seriously across all sectors and results in more jobs for the blue-collar workers he has focused on throughout his career.

Biden thanked world leaders for taking part in the summit stating that "your leadership on this issue is a statement to every nation especially our young people who were ready to meeting this moment." "Meeting this moment is about more than preserving this planet. It is also about providing a better future for all of us. That's why, when we talk about climate, I think about jobs," he said.

During his speech, Biden focused on the job creation aspect of addressing the climate crisis, suggesting he sees "an opportunity to create millions of good-paying middle-class union jobs." "When I talk about climate, I think jobs. Within our climate response lies an extraordinary job creation and economic opportunity ready to be fired up," Biden said, going on to urge investment in infrastructure.

"I want to build critical infrastructure to produce and deploy clean technology, both those we can harness today and those we will invent tomorrow," he said.

"The United States sets out on the road to cut our greenhouse gases in half-- and half by the end of this decade. That's where we're headed as a nation, and that's what we can do if we take action to build an economy that's not only more prosperous but healthier, fairer and cleaner for the entire planet," Biden said.

"These steps will set America's economy to net-zero emissions by no later than 2050. But the truth is America represents less than 15 per cent of the emissions. No nations can solve this crisis on their own," he added. 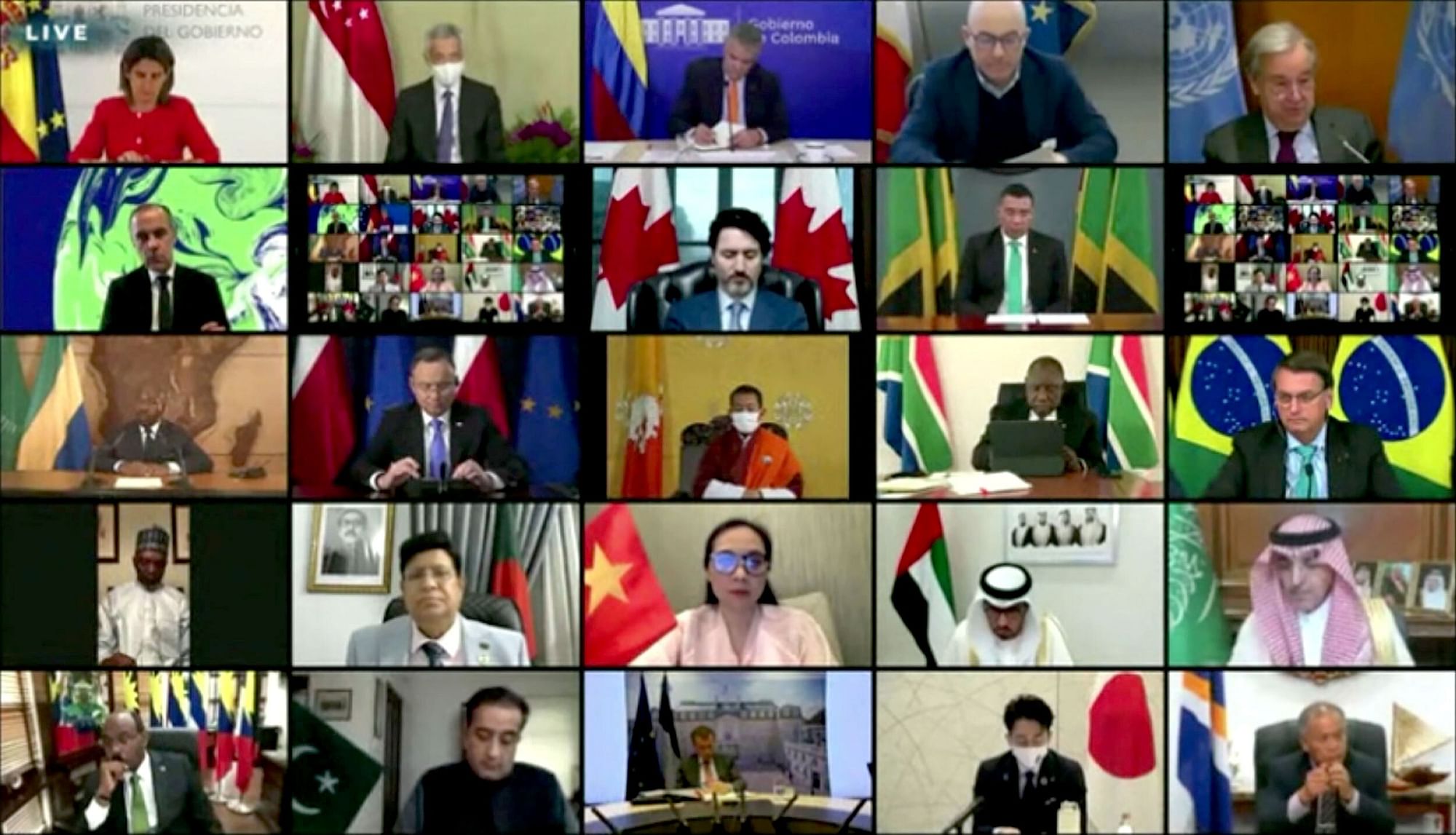 Biden also used his remarks to warn about the impacts of not acting on climate change. "The signs are unmistakable. The science is undeniable. But the cost of inaction keeps mounting... The United States is not waiting, we are resolving to take action," he said.

Vice President Kamala Harris made brief introductory remarks ahead of Biden, outlining how the leaders present share the common concern of climate change.

"As a global community, it is imperative that we act quickly and together," she said, calling for innovation and collaboration "around the world." CNN further reported that former US Vice President and Nobel Laureate Al Gore praised the Biden administration's pledge on cutting US carbon emissions on Thursday, calling it "a ground-breaking step" and saying, "we have no more time to waste." Gore noted that significant cuts are needed in this decade if we are to limit the global temperature rise and avoid the most catastrophic impacts of climate change.

"This ambitious goal is one that we must reach. I know that with the Biden Administration's whole-of-government approach, paired with investments in green jobs and infrastructure under consideration in Congress, we can," Gore said, as quoted by CNN.

Prime Minister Yoshihide Suga said Japan will strive by 2030 to cut its emissions by 46per cent from 2013 levels, up from its earlier goal of 26per cent, to achieve carbon neutrality by 2050, a target he announced in October. He said Japan would further try to push the reduction as high as 50per cent.

"It will not be easy," Suga said. "In order to achieve the target, we will firmly implement concrete measures, while aiming to create a positive cycle linking the economy and environment and achieve strong growth." Japan has been under pressure from environmental groups and European countries to do more than its earlier target of 26per cent.

Suga, during a visit to Washington last week, agreed to cooperate in leading global efforts to reduce carbon emissions by promoting clean energy technologies and implementing the 2015 Paris climate accord.

Progress toward reducing reliance on fossil fuels in Japan has been hindered by the prolonged closures of most of its nuclear plants after the Fukushima nuclear plant disaster in 2011.

Japan's current energy plan, set in 2018, calls for 22-24per cent of its energy to come from renewables, 20-22per cent from nuclear power and 56per cent from fossil fuels such as oil, coal and gas.

Energy experts are discussing revisions to the plan for 2030 and 2050. The 2050 emissions-free target would require drastic changes and likely prompt calls for more nuclear plant restarts.

About 40per cent of Japan's carbon emissions come from power companies, and they must use more renewable sources of energy while stepping up development of technologies using hydrogen, ammonia and other carbon-free resources, experts say.

Suga has said he will speed up research and development of key technologies such as next- generation solar batteries and carbon recycling. He also promised to reduce Japan's reliance on coal-fired energy by promoting conservation and maximizing renewables, while promoting nuclear energy. 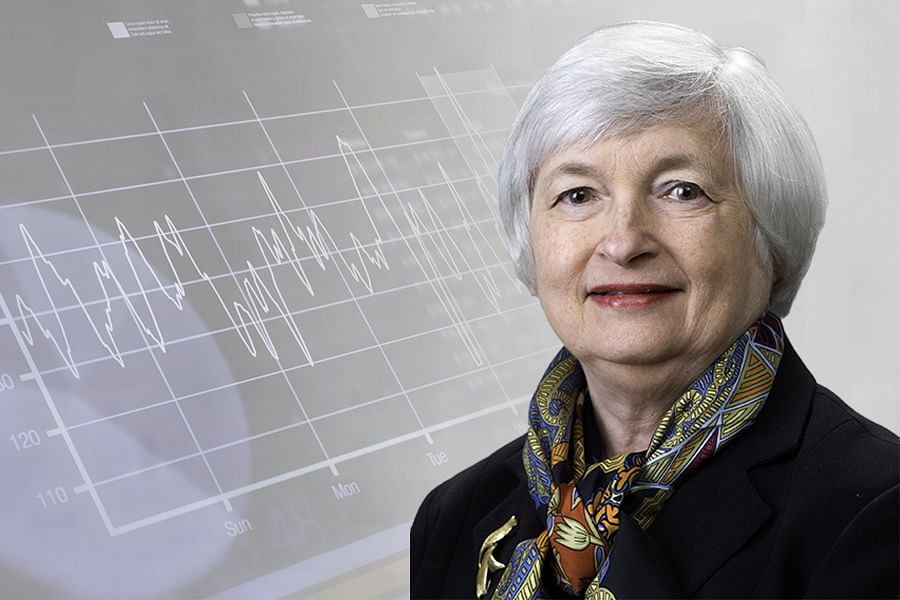 US Treasury Secretary Janet Yellen said that her Department will take a "whole-of-economy" approach to tackle the "existential risk" of climate change.

"The Biden administration is taking a whole-of-government approach to aggressively tackle climate change. My goal, at Treasury, is to support this work with a whole-of-economy approach," Yellen said in remarks to the Institute of International Finance on Wednesday.

"Specifically, we are committed to directing public investment to areas that can facilitate our transition to net-zero and strengthen the functioning of our financial system so that workers, investors, and businesses can seize the opportunity that tackling climate change presents," she said.

Noting that climate change is an "existential risk" to the future economy and way of life, Yellen said that massive investments are needed over the next 10 years to facilitate the transition to net-zero carbon emissions.

"One estimate placed the needed incremental investments at over $2.5 trillion for the US alone. Private capital will need to fill most of that gap," she said.

"We also recognise the financial sector has an opportunity to play an important role in financing and leading the transition of the global economy to a net-zero economy," added the Treasury Secretary.

Yellen's remarks came after the Treasury Department announced on Monday that it was creating a new "Climate Hub" in the department to help coordinate economic policies that address climate change.

"With a view of all Treasury climate initiatives, the Hub will enable Treasury to move nimbly and efficiently in prioritizing climate action," the Department said.