US, Iranian warships have tense encounter at sea, near crucial Strait of Hormuz

A third of the world's liquefied natural gas and almost 20% of total global oil consumption passes through the strait, making it a highly important strategic location for international trade

American and Iranian warships had a near-miss encounter on Monday after three IRGC vessels zipped past US Army counterparts at high speed and nearly caused a crash, a US Military official told The Washington Post.

The incident on Monday involving the US Guard and the US Navy comes as tensions remain high over stalled negotiations over Iran’s tattered nuclear deal with world powers and as Tehran enriches uranium closer than ever to weapons-grade levels under decreasing international oversight.

Meanwhile, the United Nations’ nuclear watchdog said Iran now plans to enrich uranium through a second set of advanced centrifuges at its underground Fordo facility amid the standoff.

According to the US official, the patrol ship USS Sirocco and the fast transport vessel USNS Choctaw County in the Persian Gulf on routine transit when three Iranian boats approached the Sirocco head-on – coming within 50 yards of the Choctaw County and diverting only when the Sirocco issued an audible warning signal and deployed a warning flare.

“(The Iranian Navy) did not meet the international standards of professional or safe maritime behavior, increasing the risk of miscalculation and collision,” said Col. Joseph Buccino, spokesman for US Central Command.

In a video released by the Navy’s Bahrain-based 5th Fleet, a high-speed Guard Boghammar is seen turning head-on toward the Sirocco. The Sirocco repeatedly blows its horn at the Boghammar, which turns away as it closes in. The flare shot can be heard, but not seen, as the Boghammar passes the Sirocco with the Iranian flag flying above it.

The Navy said the Boghammar came within 50 yards (45 meters) of the Sirocco, raising the risk of the vessels running into each other. The overall encounter lasted about an hour, the Navy said.

The Guard’s “actions did not meet international standards of professional or safe maritime behavior, increasing the risk of miscalculation and collision,” the Navy said.

Iran did not immediately acknowledge the incident in the strategic waterway — a fifth of all traded oil passes through the strait.

Strait of Hormuz - A crucial chokepoint

In 2015, the IRGC fired rockets close to the Nimitz-class carrier USS Harry S. Truman while it was transiting the Strait of Hormuz. Denouncing Iran’s assault as “highly provocative,” the US Central Command (CENTCOM) at the time reported that the IRGC’s motive to fire drills less than 1,500 yards away from the carrier was to threaten America’s presence in the region.

The Gulf of Oman links the Arabian Sea with the Strait of Hormuz - the gateway to the Persian Gulf.

It provides the only sea passage from the Persian Gulf to the open ocean and is one of the world's most strategically important choke points.

A third of the world's liquefied natural gas and almost 20% of total global oil consumption passes through the strait, making it a highly important strategic location for international trade.

The region thus has acquired considerable strategic significance for the world’s industrialized countries. Exploration has remained active, and new reserves are continually being discovered, both on land and offshore.

Control of these reserves has led to numerous legal wrangles among states about exact territorial limits and has been at least partially responsible for major conflicts in the region: the Iran-Iraq War of the 1980s, the Persian Gulf War of the early 1990s, and the Iraq War of the early 21st century.

Large amounts of oil are refined locally, but most is exported to northwestern Europe, East Asia, and other areas of the world. Petrochemical and other petroleum-based industries, as well as consumer industries, have been developing rapidly in the gulf region. 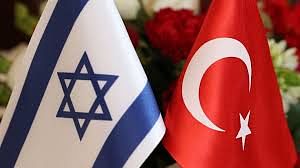 HomeWorldUS, Iranian warships have tense encounter at sea, near crucial Strait of Hormuz