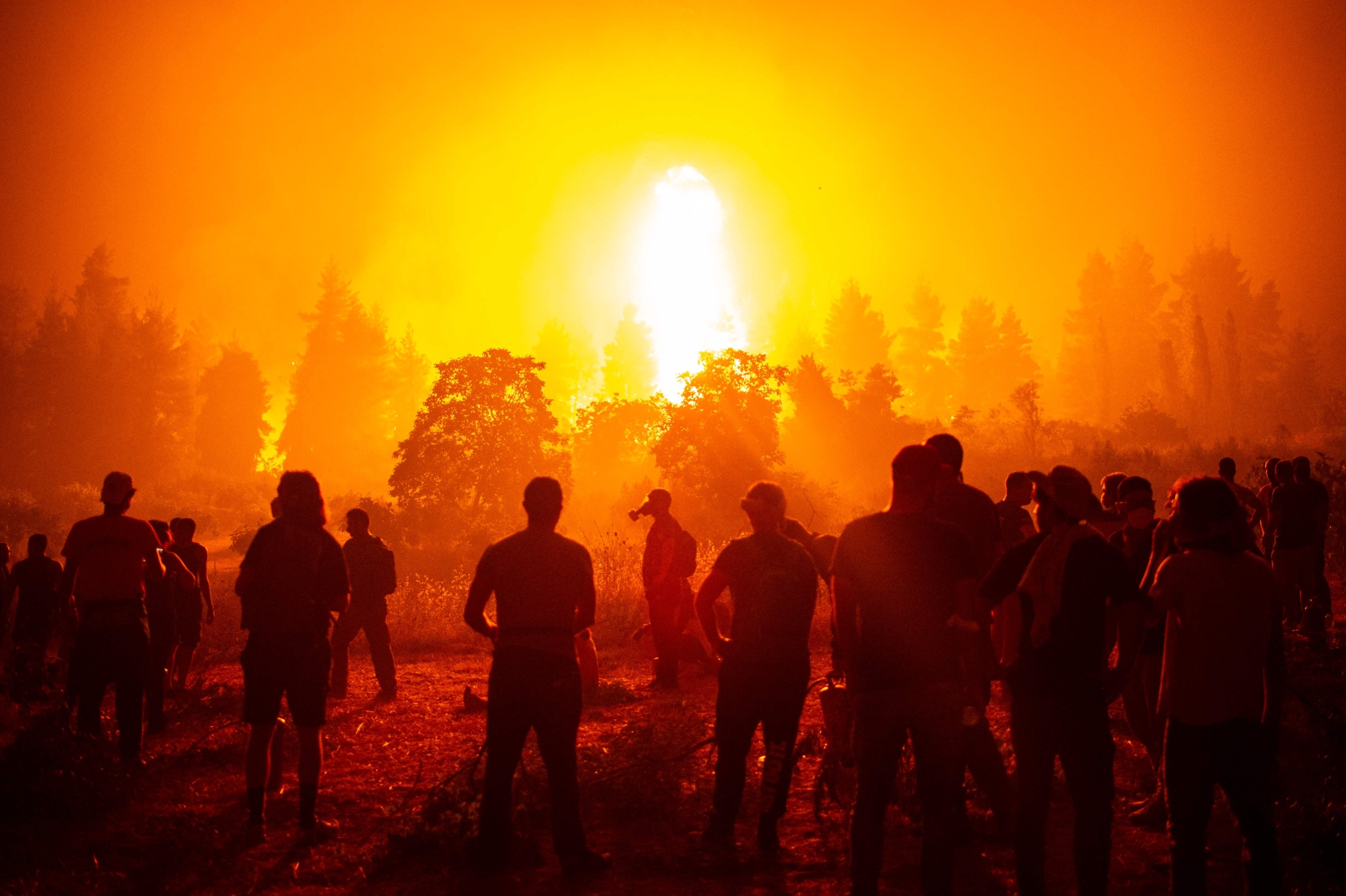 Local youths and volunteers gather in an open field and wait to support firefighters during a wildfire next to the village of Kamatriades, near Istiaia, northern Evia (Euboea) island on August 9, 2021. | Photo: AFP

The death toll from the raging wildfires in Greece has risen to two on Monday as devastating blazes continue to wreak havoc across the country. Meanwhile, two volunteer firefighters, who were rushed to a hospital in Athens on Friday, remained in critical condition on Monday.

A bulldozer driver was killed close to where a fire was raging in Fokida region in central Greece on Monday, the hospital where he was transferred said. The 70-year-old man was assisting with the bulldozer to set up firebreaks in the area when the track fell over a precipice in a depth of 30 meters and died. Last week, another volunteer lost his life in the wildfires in the northern suburbs of Athens, hit by an electricity pylon.

"In the past few days, 63 organized evacuations took place in 141 villages and settlements. I completely understand the pain of our citizens who saw their homes or property burning," Greek Prime Minister Kyriakos Mitsotakis said in an address broadcast live on public broadcaster ERT Monday evening, noting that the priority was "to save lives."

Mitsotakis announced that a supplementary support package of 500 million euros (587 million U.S. dollars) will be distributed to people who have lost homes and property in the fire-stricken areas of Attica and Evia island. 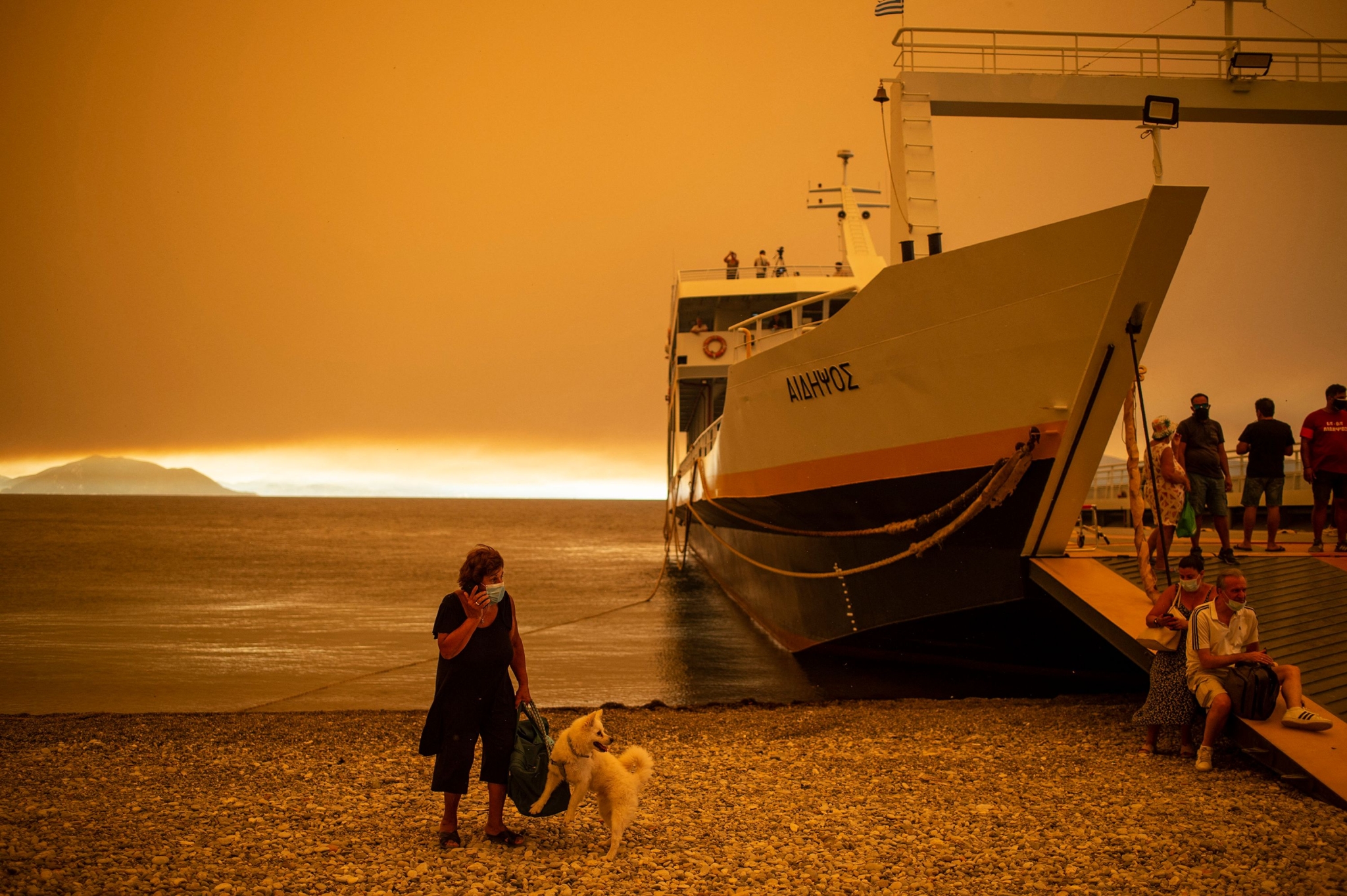 A woman with her dog stands next to a ferry at the port of the village of Pefki, during a wildfire at Pefki village on Evia (Euboea) island on August 8, 2021. | Photo: AFP

He also thanked the countries that were assisting Greece with human resources, planes and vehicles to battle the fires, expressing his gratitude to all those people who were in the front line of this "unprecedented disaster." For the seventh day, hundreds of firefighters along with residents, volunteers, and international aid crews were trying to contain the biggest blaze that is still raging in the northern part of Greece's Evia island.

Nightmarish scenes continued to unfold during the weekend and on Monday as the shifting winds set many resurgent wildfires in large parts of the area, forcing more evacuations of villages and thousands of residents and tourists.

"Everyone here makes their living from tourism activities, local businesses and cultivating oil groves. We are going to starve here in Pefki, and in the whole northern part of Evia island," Maria, owner of a small hotel and restaurant in Pefki village in northern Evia island, told Xinhua.

"After four family generations that we managed to make something, we left our houses and businesses with a backpack. This is our fortune, with that we have been left," Maria said, as she was embarking on a ferry boat to escape the fire. 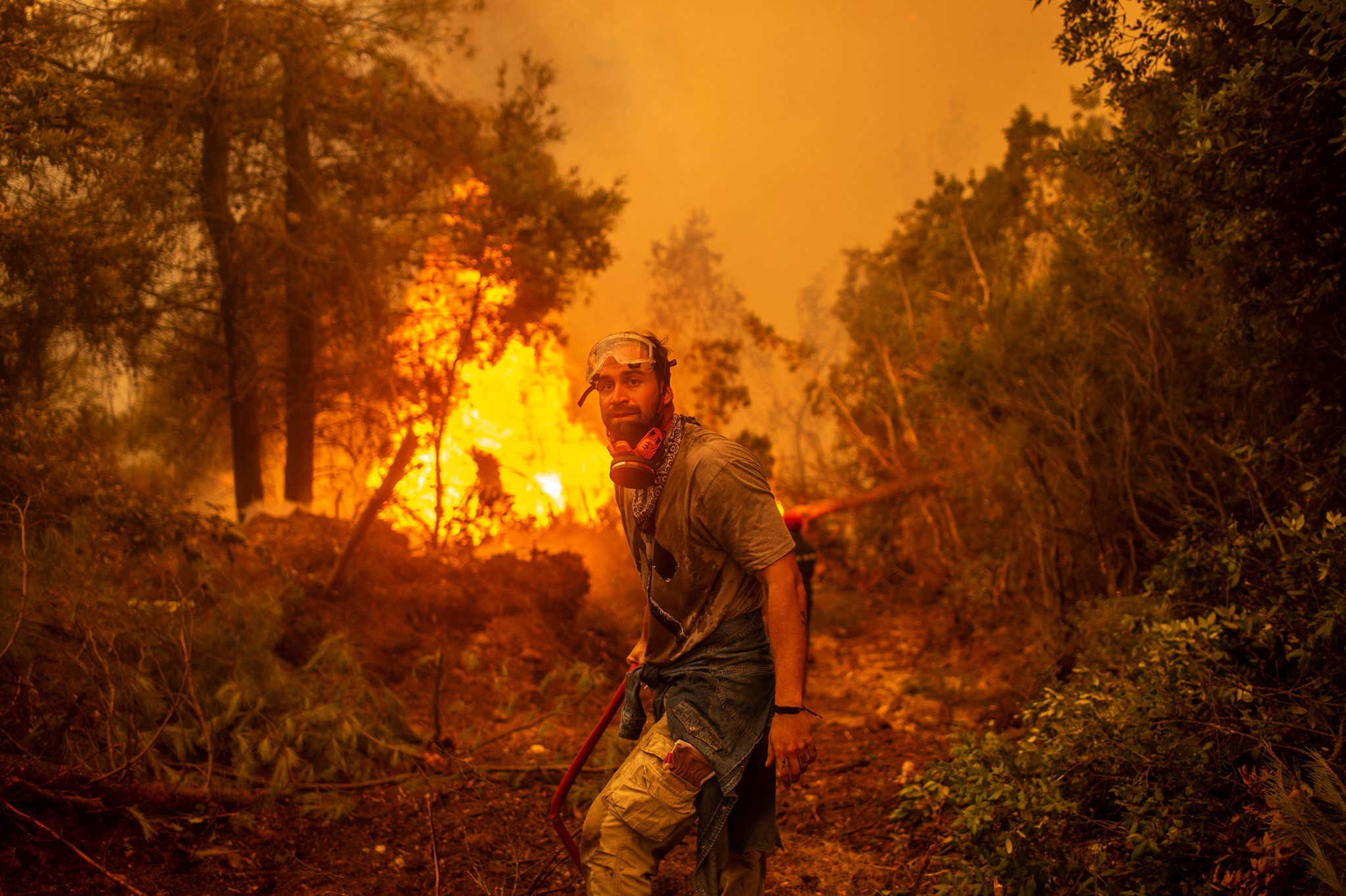 A volunteers holds a water hose near a burning blaze as he tries to extinguish a fire in the village of Glatsona on Evia (Euboea) island, on August 9, 2021. | Photo: AFP

According to Greek Coast Guard, a total of 2,770 residents and tourists were evacuated by sea from the fire-stricken areas of Evia island from August 1 to 8.

After the fire was contained during the weekend, Greek authorities on Monday started assessing the damages of the extended fire fronts that swept through several villages in the northern suburbs of Attica prefecture, on the foothills of Mount Parnitha.

The extensive fires throughout Greece led to the intervention of the prosecutor of the Supreme Court, who requested an investigation, as there were suspicions of deliberate organized criminal activity of arson in forests, the Greek national news agency AMNA reported.

Forest fires are common in Greece over the summer. In July 2018, a wildfire swept through a resort near Athens, resulting in 102 deaths. 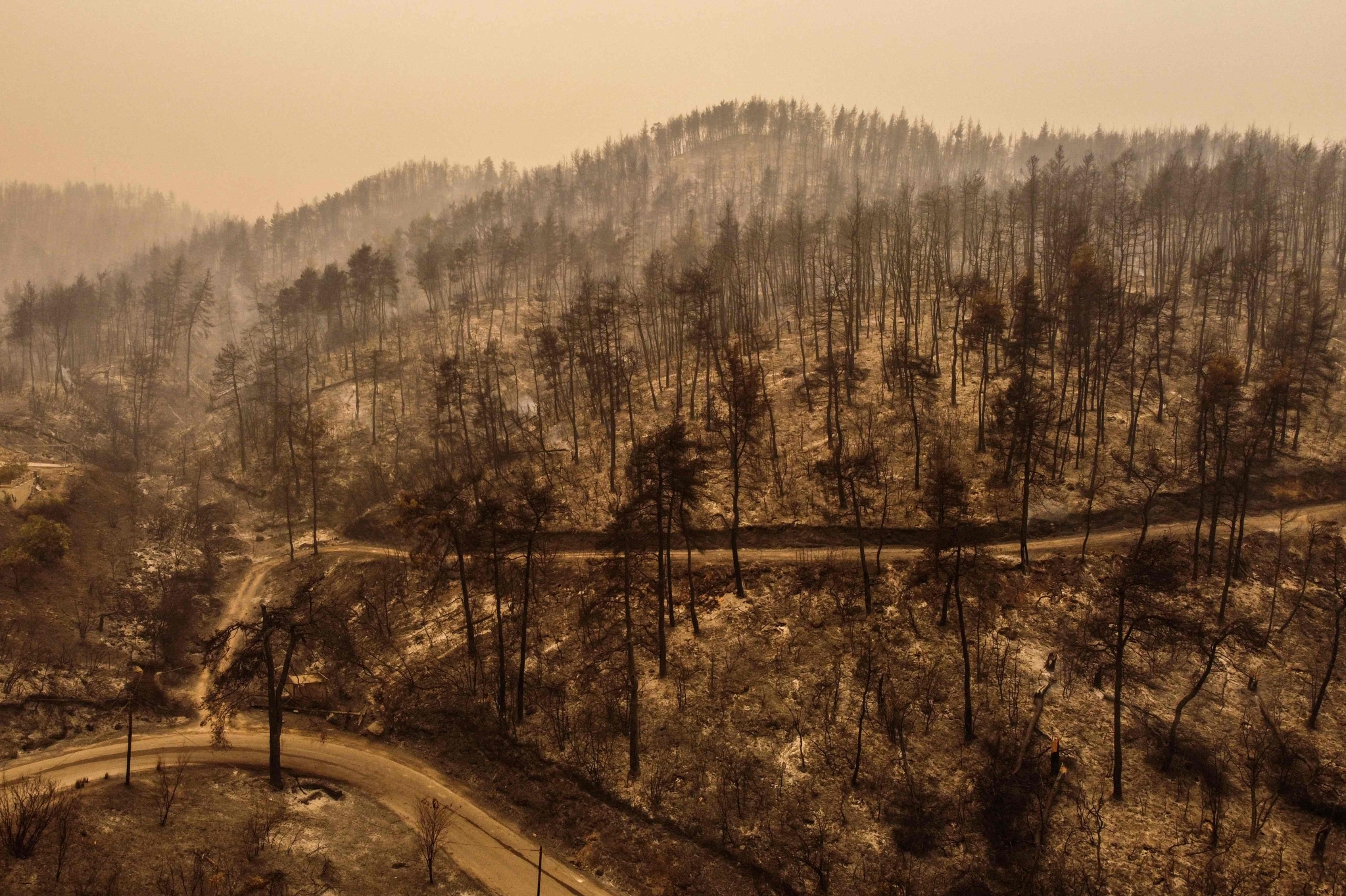 This aerial picture taken on August 9, 2021, shows burnt trees in the village of Pefki on Evia (Euboea) island. | Photo: AFP