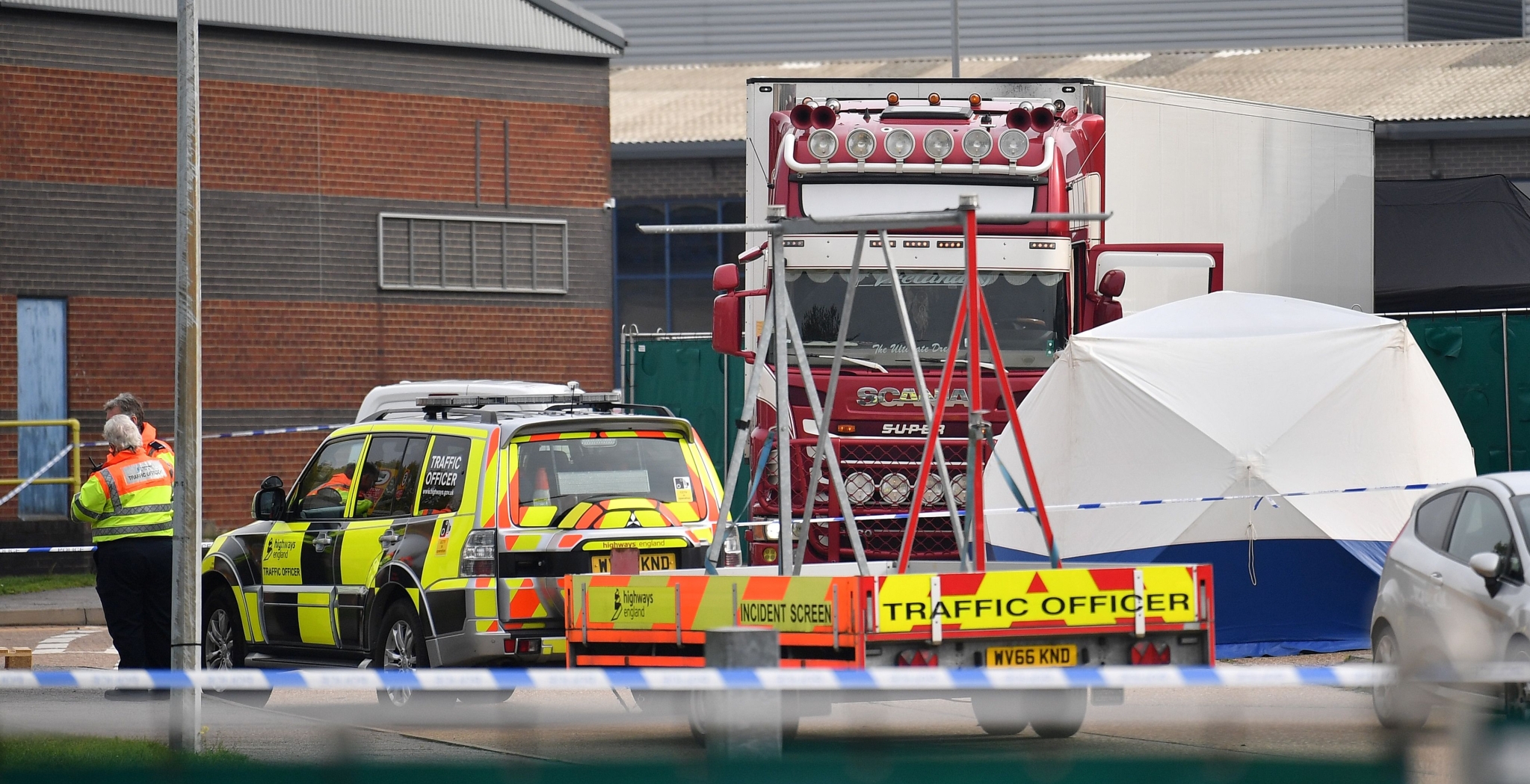 A lorry containing 39 dead bodies is pictured inside a Police cordon in east of London. | Photo by Ben STANSALL / AFP

London: In an appalling tragedy, 39 people were found dead on Wednesday near London in a container of truck, which came from Bulgaria, and police have arrested the driver of the vehicle for questioning.

Essex Police said they were called by the local ambulance service on Wednesday early morning after the discovery at Waterglade Industrial Park at Eastern Avenue in Grays area of Essex, south-east England.

While there is no confirmation of the nationalities of the victims, officials said the truck came from Bulgaria and entered the UK via Holyhead port in Wales on Saturday. According to Essex Police, early indications are that 38 adults and one teenager have died, with no information of any survivors.

Essex Police Chief Superintendent Andrew Mariner said officers were trying to identify victims as their enquiries remain ongoing after the arrest of the 25-year-old driver from Northern Ireland.

He said: "This is a tragic incident where a large number of people have lost their lives. Our enquiries are ongoing to establish what has happened. We are in the process of identifying the victims, however I anticipate that this could be a lengthy process.

"We have arrested the lorry driver in connection with the incident who remains in police custody as our enquiries continue," he said. A police cordon remains in place at the industrial estate where the discovery was made.

"I am receiving regular updates and the Home Office will work closely with Essex Police as we establish exactly what has happened. My thoughts are with all those who lost their lives and their loved ones," British premier Johnson said in his statement.

"Shocked and saddened by this utterly tragic incident in Grays. Essex Police has arrested an individual and we must give them the space to conduct their investigations," Home Secretary Patel said.

The speculation around the discovery has focussed around people trafficking as the route from Bulgaria via the Welsh port of Holyhead into Britain is an unusual one for vehicles to undertake.

Thurrock legislator Jackie Doyle-Price said it was "sickening news". "People trafficking is a vile and dangerous business," she tweeted, adding that she hoped Essex Police could "bring these murderers to justice".

In June 2000, as many as 58 Chinese immigrants were reportedly found suffocated to death in the back of a lorry in Dover. There were two survivors. A Dutch lorry driver was jailed the following year for manslaughter.

In 2014, a total of 34 Afghan Sikhs, suffering from severe dehydration, hypothermia and lack of air, were found alive inside a shipping container. One man was found dead, having passed away during the sea crossing from Belgium.