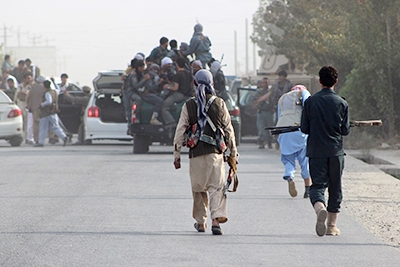 Afghan security forces gather, as battles were ongoing between Taliban militants and Afghan security forces, in Kunduz, capital of northeastern Kunduz province on September 28, 2015. The Taliban are in control of around half of Kunduz, Afghanistan's fifth largest city, a senior police official said September 28. Sayed Sarwar Hussaini, police spokesman for the northeastern Kunduz province, told a news conference: "Around half the city has fallen into the hands of Taliban insurgents." AFP PHOTO / Najim Rahim |

Kunduz (Afghanistan) : The Taliban seized control of half of a major Afghan city on Monday, the first time they have done so since being ousted from power by a US-led invasion. The hardline Islamists hoisted their flag over the main square of the northeastern city of Kunduz, witnesses said, after 2,000 of their fighters took the city, offering a potentially powerful image in a country that laboured under their rule until 2001.

“Half the city has fallen into the hands of Taliban insurgents,” Sayed Sarwar Hussaini, police spokesman for the northeastern Kunduz province, told a news conference, adding local forces had not yet received promised external support.

A government official, who requested anonymity, told AFP: “Around 3:30pm the Taliban installed their flag in the main square of Kunduz city.” He added that the local headquarters of the National Directorate of Security, the country’s main intelligence agency, had been set on fire, and prisoners had been released from the city jail. “Only the police headquarters is now resisting,” he said.

This was the group’s third attempt to breach the city after failures in April and June. An AFP reporter in the city said it was swarming with Taliban fighters who were racing police vehicles and had raised the flag of the Islamic Emirate of Afghanistan (the group’s official name) over the homes of government officials. The Taliban’s ability to penetrate the city, even if only temporary, will be seen as a major psychological blow to the country’s NATO-trained police and army who have been fighting the Islamist militants this year without the front-line help of foreign forces since the end of their combat mission in December 2014.

The Islamist group has been largely absent from cities since being driven from power by the US and its allies, but has maintained often-brutal rule over swathes of the countryside. A senior tribal elder in Kunduz, 250 kilometres north of Kabul, said the militia had control of one of the city’s districts, while a second elder added his house was now around 100 metres from their forward line.

Saad Mukhtar, head of a 200-bed government hospital, said the Taliban had control of the building and were hunting for wounded Afghan troops.