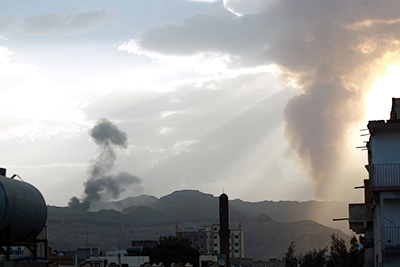 Smoke and flames rise allegedly from Shiite Huthi rebels camps following an airstrike by the Saudi-led alliance in the Yemeni capital Sanaa. |

Riyadh: The Saudi-led coalition involved in a war in Yemen destroyed some "hostile targets" in the city Hodeidah on Friday. The operation was carried after the coalition intercepted and destructed a remote-controlled booby-trapped boat in the Red Sea on Thursday, Xinhua news agency reported.

Coalition spokesperson Turki Al Maliki said that the targets posed a threat to regional and international security. The destroyed targets included four sites for the assembling and booby-trapping of remote-controlled boats as well as naval mines.

These sites are used to carry out "hostilities and terrorist operations" that threaten maritime shipping lanes and routes and international trade in Bab Al-Mandab Strait and in the Red Sea, the spokesperson explained. Yemeni Houthi rebels have claimed responsibility for the attacks, but the US and Saudi Arabia blamed Iran for sponsoring the attacks, citing the weapons used were Iranian-made.