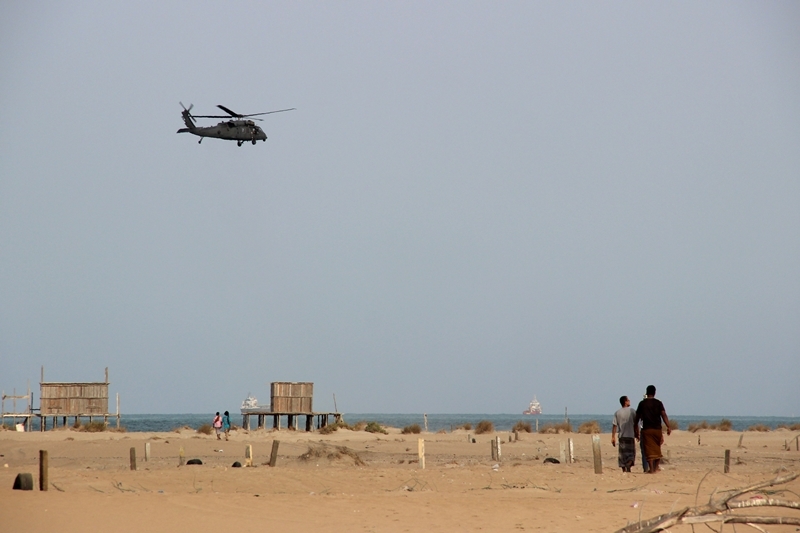 The Gulf federation's military command, in a brief statement published by the official WAM news agency, did not specify the type of helicopter, nor the circumstances and location of the crash. But witnesses told AFP the aircraft came down in Aden, Yemen's second city from which Shiite Huthi rebels were driven out by government forces last July. / AFP PHOTO / SALEH AL-OBEIDI |

Sanaa:  A bomb-laden drone flown by Yemen’s Houthi rebels flew into a military parade on Thursday outside of the southern port city of Aden, killing at least six troops from a Saudi-led coalition and their allies in a brazen attack threatening UN-brokered peace efforts to end the years-long war tearing at the Arab world’s poorest nation.The attack at the Al-Anad Air Base, where American special forces once led their fight against Yemen’s al-Qaida branch, targeted high-ranking military officials in Yemen’s internationally recognised government.

The attack also raised new questions about Iran’s alleged role in arming the Houthis with drone and ballistic missile technology, something long denied by Tehran despite researchers and UN experts linking the weapons to the Islamic Republi “Once again this proves that the Houthi criminal militias are not ready for peace and that they are exploiting truces in order for deployment and reinforcements,” said Information Minister Moammar al-Eryani, who said two senior military officials were wounded in the attack.”This is time for the international community to stand by the legitimate government and force the militias to give up their weapons and pull out of the cities,” he added.

The Houthis immediately claimed the attack through their al-Masirah satellite news channel, saying the attack targeted “invaders and mercenaries” at the base in the southern province of Lahj, leaving “dozens of dead and wounded.”      Yemeni officials said that among the wounded were Mohammad Saleh Tamah, head of Yemen’s Intelligence Service, senior military commander Mohammad Jawas, and Lahj governor Ahmed al-Turki, adding that authorities were still searching for wounded among the rubble.The officials spoke on condition of anonymity as they were not authorized to talk to reporters.

Local reporter Nabil al-Qaiti was attending the ceremony and standing in front of the stage when he saw a drone approach and hover nearby about 25 meters high in the air, minutes after the parade started. Army spokesman Mohammed al-Naqib was delivering a speech from a podium when the drone exploded.”It was a very strong explosion and we could feel the ressure he said, adding that two of the people standing next to him – a soldier and a journalist- were wounded. Al-Qaiti saw many wounded but no dead. “The drone was packed with explosives,” he added.Some 8,000 soldiers had been taking part in the parade, as well as two governors and a large number of top military commanders including the chief of staff. Initial reports said six troops were killed.

Yemen plunged into civil war in 2014 when the rebels captured Sanaa, and the Saudi-led coalition intervened a year later when they pushed further south. The coalition, which is fighting alongside government troops, has since been trying to restore Yemen’s internationally recognized government to power. Hopes were raised last month that the country was moving toward peace, after the two sides agreed to a prisoner swap and cease-fire in the port city of Hodeida, where rival forces were to withdraw to allow humanitarian aid flows to return and hopefully relieve a country pushed to the brink of famine by war.

Fighting has largely abated in Hodeida but progress on the withdrawal has been slow. The UN humanitarian aid chief Wednesday accused the rebels of blocking humanitarian supplies traveling from areas under their control to government-held areas.Mark Lowcock told the UN Security Council that the rebels also recently informed humanitarian agencies that 72 hours’ notice is required ahead of any movements instead of 48 hours.Officials in the Saudi-led coalition have shown journalists a series of drones they said showed a growing sophistication by the Houthis, starting first with plastic foam models that could be built by hobby kit to one captured in April that closely resembled an Iranian-made drone. Those drones have in the past been flown into the radar arrays of Saudi Arabia’s Patriot missile batteries, according to the research group Conflict Armament Research, disabling them and allowing the Houthis to fire ballistic missiles into the kingdom unchallenged. Iran has been accused by the US and the UN of supplying ballistic missile technology and arms to the Houthis, something Tehran denies.Arab satellite channels owned by Saudi Arabia immediately began describing the drone used in Thursday’s attack as Iranian made, without offering evidence.

However, a United Nations panel of experts on Yemen issued a report in 2018 noting that the Houthi’s Qasef-1 drone “is virtually identical in design, dimensions and capability to that of the Ababil-T, manufactured by the Iran Aircraft Manufacturing Industries.”        “At least two components of the system were supplied to the Islamic Republic of Iran after the implementation of the targeted arms embargo” in April 2015, the panel said. The Ababil-T can deliver up to a 45-kilogram warhead up to 150 kilometers away.Such drones also remain difficult to shoot down with either light or heavy weapons fire. Iraqi forces learned while driving out the Islamic State group from northern Iraq, where the extremists would load drones with grenades or simple explosives to target their forces.