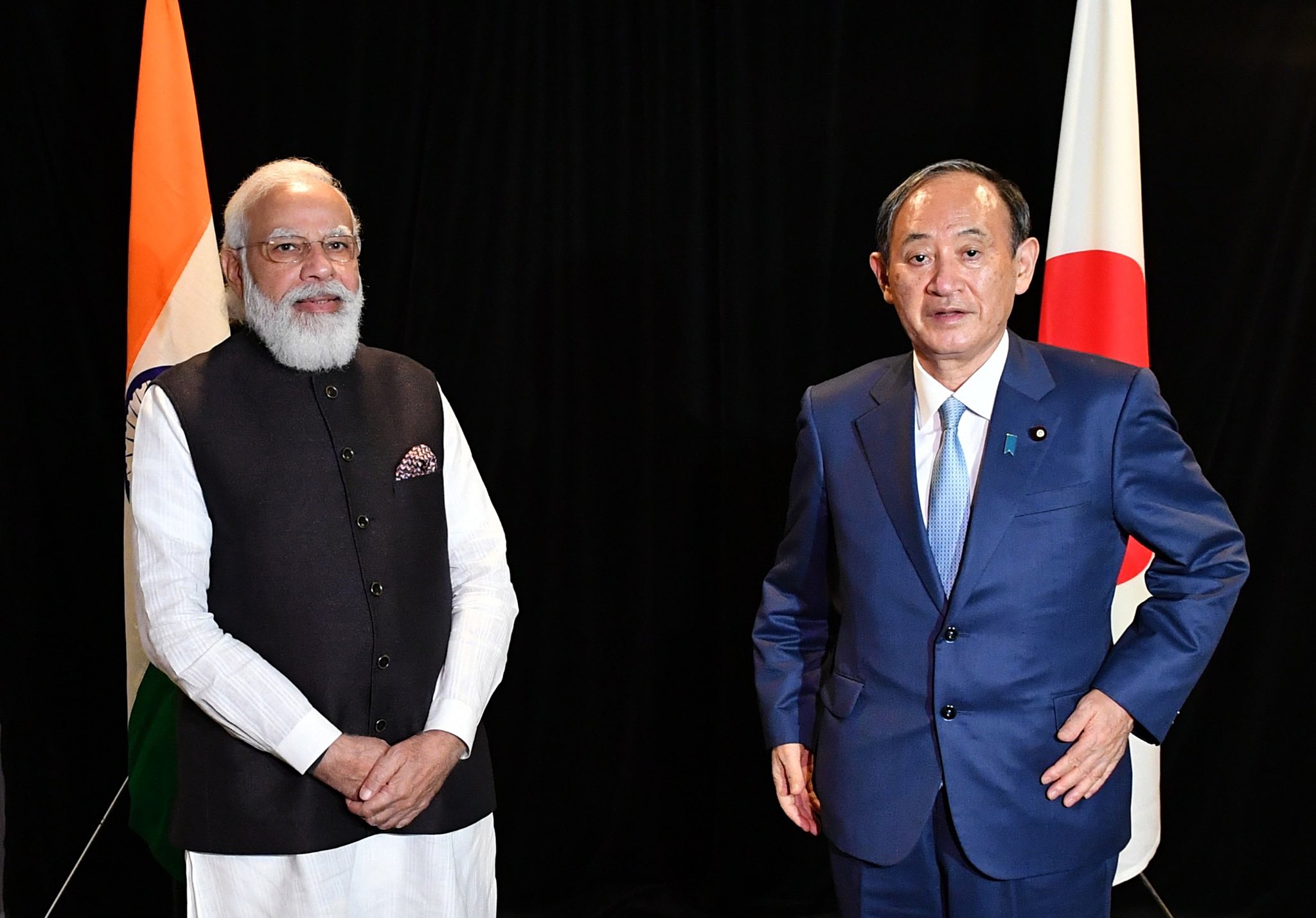 Prime Minister Narendra Modi and his Japanese counterpart Yoshihide Suga have reaffirmed their commitment towards a free, open and inclusive Indo-Pacific region, as they reviewed the multi-faceted bilateral relationship and exchanged views on recent global developments, including in Afghanistan, ahead of the first in-person Quad meeting to be hosted by US President Joe Biden.

During their meeting here on Thursday, the two Prime Ministers agreed to enhance bilateral security and defence cooperation, including in the area of defence equipment and technologies, according to a statement issued by the Ministry of External Affairs (MEA).

Prime Minister Modi thanked Suga for his personal commitment and leadership, both as Prime Minister and Chief Cabinet Secretary earlier, in enabling great advances in the India-Japan Special Strategic & Global Partnership over the last few years, it said.

"The two Prime Ministers reviewed the multi-faceted relationship between the two countries and exchanged views on recent global and regional developments, including in Afghanistan. They reaffirmed their commitment towards a free, open and inclusive Indo-Pacific region," it said.

The two Prime Ministers welcomed the increasing economic engagement between the two countries.

Prime Minister Modi in a tweet said that Japan is one of India's most valued partners.

"I had an excellent meeting with PM @sugawitter on a variety of subjects that would further boost cooperation between our nations. A strong India-Japan friendship augurs well for the entire planet," Modi tweeted.

"Furthering friendship with Japan," the MEA said in a tweet after the meeting. "Prime Ministers @narendramodi and @sugawitter had a fruitful meeting in Washington DC. Both leaders held discussions on several issues including ways to give further impetus to trade and cultural ties," it said.

A special strategic and global partnership with Japan- firmly rooted in history and based on common values, it further said.

They welcomed the launch of the Supply Chain Resilience Initiative (SCRI) between India, Japan and Australia earlier this year as a collaborative mechanism to enable resilient, diversified and trustworthy supply chains, the statement said.

Prime Minister Suga informed Modi that in order to operationalise the Specified Skilled workers (SSW) agreement which was signed earlier this year, the Japanese side would be undertaking skill and language tests in India from early 2022, it said.

They discussed the COVID-19 pandemic and efforts to address it and highlighted the increasing importance of digital technologies and in this regard positively evaluated the progress in the India-Japan Digital Partnership, especially in start-ups.

The two prime ministers reaffirmed their commitment to advance efforts to facilitate the smooth and timely implementation of the Mumbai-Ahmedabad High Speed Rail (MAHSR) project.

They also welcomed the progress in bilateral developmental projects in India's North Eastern Region under the India-Japan Act East Forum, and noted possibilities for further enhancement of such cooperation, it said.

Prime Minister Suga expressed confidence that the strong momentum attained by the India-Japan partnership in the last few years will continue even under the new administration in Japan.

Modi conveyed that he was looking forward to welcoming the next prime minister of Japan to India for India-Japan Annual Summit in the near future.

Modi and Suga spoke in April this year and the two leaders underscored the importance of working together to create resilient, diversified and trustworthy supply chains, ensuring reliable supply of critical materials and technologies, and developing new partnerships in manufacturing and skill development to deal with the crisis.

Suga had called off a scheduled visit to India in April end in view of the coronavirus situation.

Speaking after virtually inaugurating a Japanese Zen garden and Kaizen Academy set up at the premises of the Ahmedabad Management Association (AMA) in June, Modi had described Suga as a very straight-forward person.

"Prime Minister Suga and I believe that during the time of this COVID-19 pandemic crisis, the Indo-Japanese friendship and our partnership have become even more relevant for global stability and prosperity. Today, when we are facing several global challenges, it is the need of the hour that our friendship and relationship get stronger day by day," Modi had said.

He said efforts like setting up of the Kaizen Academy are a beautiful reflection of this relationship.

Modi said the launch of the Zen garden and Kaizen Academy is a "symbol of the spontaneity and modernity of India-Japan relations".