HomeWorldPakistan: Around 1,700 people killed, over 12,800 injured due to rains, flood

To date, 81 districts across five of Pakistan's six provinces have been declared 'calamity hit' by the Government of Pakistan -- with Balochistan, Khyber Pakhtunkhwa and Sindh provinces being the worst hit.

Islamabad: At least 1,695 people were killed while 12,865 were injured so far (October 2) since mid-June due to the devastating floods and rains in Pakistan, National Disaster Management Authority (NDMA) said on Sunday.

To date, 81 districts across five of Pakistan's six provinces have been declared 'calamity hit' by the Government of Pakistan -- with Balochistan, Khyber Pakhtunkhwa and Sindh provinces being the worst hit.

As of mid-September, 33 million people had been affected, at least 1,481 persons have died, over 12,720 people have been injured and an estimated 7.6 million persons may be temporarily displaced. 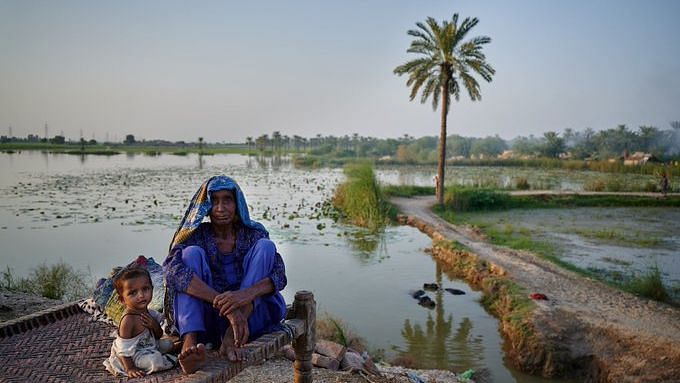 Meanwhile, the United Nations is set to launch another appeal this week for an additional USD 600 million to Pakistan to help the country recover from the impact of the record-breaking floods.

"The UN is in process of launching Revised Humanitarian Appeal on 4th of Oct in which additional USD 600 million will be asked for immediate relief assistance," it added.

Earlier, the UN launched a flash appeal in August for US 160 million assistance for flood relief support. Karim said the grant was not considered enough in the face of the unprecedented devastation.

Since the start of the floods, the number of houses destroyed has doubled and the number of houses damaged has increased by an estimated 63 per cent With no designated places to take shelter, a considerable part of the population has been displaced and an estimated 575,000 people live in relief camps. Community infrastructure such as roads, bridges, schools, and health facilities have also been destroyed by the floods.

Damaged houses and infrastructure, crowded living space and sub-standard living conditions for those displaced have exposed a large population to water-borne diseases and hindered access to safe and clean water. It is estimated that 20 per cent of water systems are damaged in Khyber Pallitunkhwa, 30 per cent in Balochistan, and up to 50 per cent in the hardest hit areas of Sindh and Punjab provinces.

With 3.5 million acres of crops devasted and over 936,000 livestock lost, people have also seen their livelihoods affected.