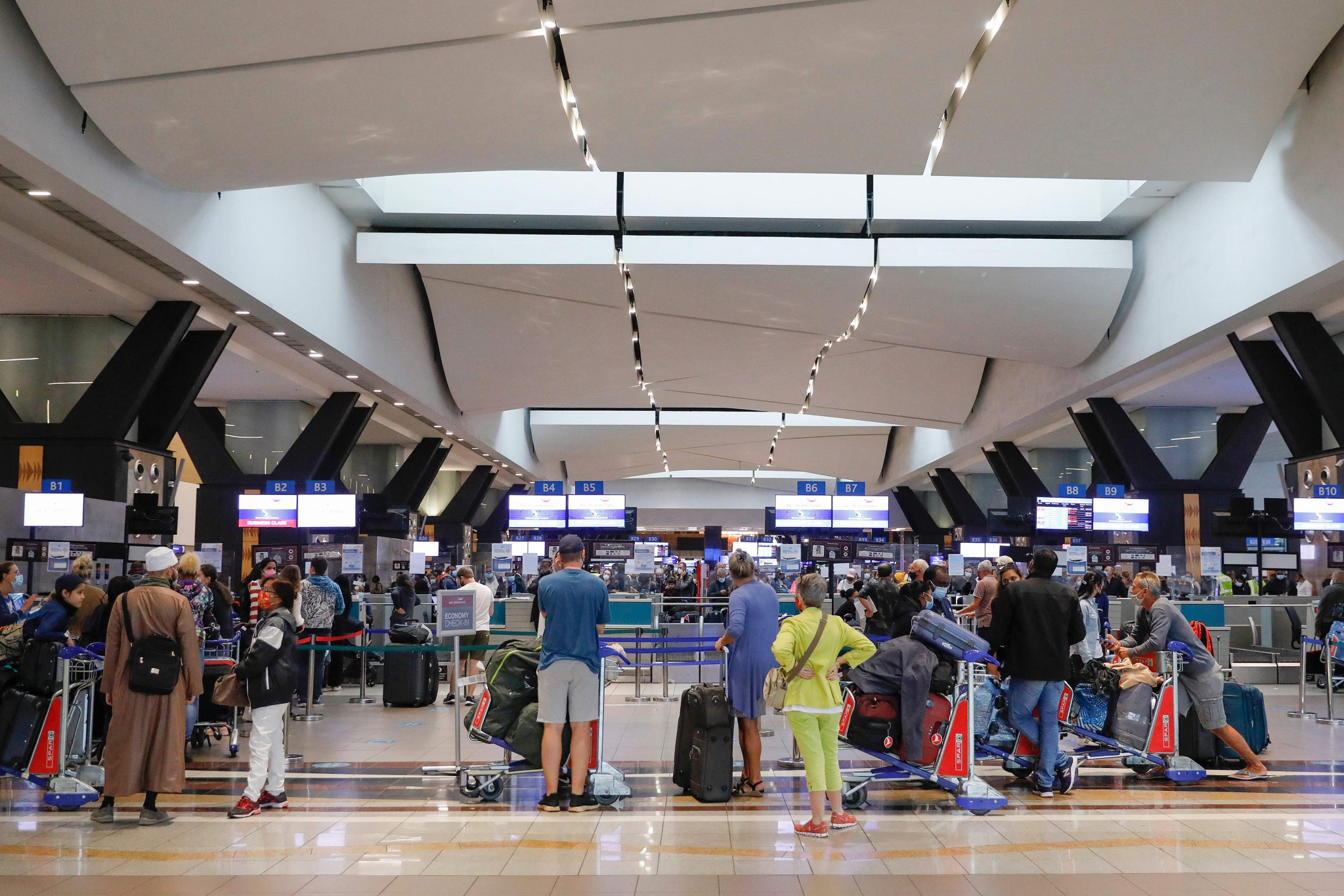 Travellers queue at a check-in counter at OR Tambo International Airport in Johannesburg on November 27, 2021, after several countries banned flights from South Africa following the discovery of a new Covid-19 variant Omicron. | (Photo by Phill Magakoe / AFP)

The Hague: At least 61 passengers out of 600 who landed in Holland from South Africa on Friday 'have Covid;' the Dutch authorities are now checking how many of them are infected with the new variant. The passengers arrived from Johannesburg and Cape Town shortly after the Dutch government imposed a ban on flights from southern African nations.

Two confirmed cases of the super variant have been detected in the UK -- in Nottingham and Brentwood, Essex — both having a history of having travelled to travelling to southern Africa. Some 48 flights carrying up to 300 people each — nearly 15,000 people in total — from South Africa have come to the UK since November 11, when the variant was first discovered in Botswana.

Germany and the Czech Republic have both confirmed suspected cases while Australia – which has banned travel to nine countries in the region — fears the variant may have already entered the country. Europe's first case of the variant was detected in Belgium -- a lady who was unvaccinated; interestingly, the super-variant carrier had never been to southern Africa, though he may have caught it when he travelled to Turkey and Egypt.

Fewer than 6% of people in Africa have been fully immunised against COVID-19, and millions of health workers and vulnerable populations are yet to receive a single dose. Those conditions can speed up spread of the virus, offering more opportunities for it to evolve into a dangerous variant, say experts.

The WHO has named the new variant omicron, labelling it a variant of concern because of its high number of mutations and some early evidence that it carries a higher degree of infection than other variants. That means people who contracted COVID-19 and have recovered could catch it again. It could take weeks to know if current vaccines are less effective against it.

With so much uncertainty about the omicron variant and scientists unlikely to flesh out their findings for a few weeks, countries around the world have been taking a safety-first approach, in the knowledge that previous outbreaks of the pandemic have been partly fuelled by lax border policies.

So, a host of countries, including Australia, Brazil, Canada Iran, Japan, Thailand and the United States, joined others, including the European Union and the U.K., in imposing travel restrictions on southern African countries. “It seems to spread rapidly,” U.S. President Joe Biden said of the new variant. He added that the pandemic will not end until global vaccinations are in place. New York governor Kathy Hochul has meanwhile declared a state of emergency as Covid transmission reached rates not seen since April 2020.

A number of pharmaceutical firms, including AstraZeneca, Moderna, Novavax and Pfizer, said they have plans in place to adapt their vaccines in light of the emergence of omicron.

South Africa recorded 2,828 new Covid cases on Friday, more than double the 1,374 recorded last Thursday, but infection levels are yet to skyrocket in the country and no hospitalisations with the new variant have occurred so far.