The two attackers went on a stabbing rampage in the ultra-Orthodox city of Elad on Thursday, Israel’s Independence Day, killing three and wounding at least four others before bolting

Two Palestinians suspected of killing three Israelis in an axe attack in the central city of Elad were arrested on Sunday after a more than two day manhunt, the security services said | AFP
Advertisement

The two attackers went on a stabbing rampage in the ultra-Orthodox city of Elad on Thursday, Israel’s Independence Day, killing three and wounding at least four others before bolting.

The stabbing was the latest in a series of deadly assaults deep inside the country in recent weeks. It came as Israeli-Palestinian tensions were already heightened by violence at a major holy site in Jerusalem sacred to Jews and Muslims.

He said Israel was entering a “new stage in the war on terror,” and said Israel was establishing a civilian national guard that would be deployed in emergency situations like the kinds of attacks the country has witnessed in recent weeks.

Earlier, Police Commissioner Kobi Shabtai warned Sunday that the terrorists who carried out the deadly attack in Elad last week were like “wounded animals” who could attempt a final suicide mission, as security forces continued to search for the suspects.

“It is important that we all remain vigilant,” Shabtai told dozens of officers involved in the manhunt who were gathered at Kibbutz Nachshonim in central Israel.

“[The suspects] have gone a long time without food and water, and they will probably do whatever they can to carry out one last suicide attack and end it one way or another for them, or they will try to survive and exploit a vulnerability within us,” the police chief added.

The unnamed officials were also said to believe that even though most of the attackers in recent weeks were not directly affiliated with Hamas, the incitement by the terror group over the Jerusalem holy site was becoming increasingly effective.

While Hamas has not taken responsibility for most of the attacks since March 22 that have left 19 people in Israel and the West Bank dead, the terror group’s Gaza leader Gaza leader, Yahya Sinwar, has repeatedly called for Palestinians to assault Israelis and the group has publicly praised the perpetrators, encouraging more attacks.

The two men suspected of killing three men in an axe and knife rampage on Thursday in Elad may have been inspired by a speech from Sinwar urging Palestinians and Arab Israelis to commit terror attacks, the Haaretz daily reported, citing an unnamed security source.

Defence Minister Benny Gantz announced a closure of the occupied West Bank – in place for the anniversary – would remain in force through Sunday.

For Palestinians, the anniversary of Israel’s 1948 declaration of independence marks the Nakba, or “catastrophe”, when more than 700,000 fled or were expelled during the war surrounding Israel’s creation.

Hamas, which rules the Gaza Strip, praised Thursday’s attack and linked it to violence at the Jerusalem holy site.

“The storming of Al-Aqsa Mosque can’t go unpunished,” Hamas Spokesperson Hazem Qassem said. “The heroic operation in Tel Aviv is a practical translation of what the resistance had warned against.”

Israel and Hamas fought an 11-day war a year ago, fueled in large part by similar unrest in Jerusalem.

Israel captured the West Bank, Gaza, and occupied East Jerusalem — which includes Al-Aqsa and other major religious sites — in the 1967 Six Day War.

At least 18 Israelis have been killed in five attacks since March, including another stabbing rampage in southern Israel, two shootings in the Tel Aviv area, and a shooting last weekend in a West Bank settlement.

Nearly 30 Palestinians have died in violence — most of whom had carried out attacks or were involved in confrontations with Israeli forces in the West Bank. But an unarmed woman and two apparent bystanders were also among those killed and rights groups say Israel often uses excessive force.

The violence has been fueled by tensions at a Jerusalem hilltop compound holy to both Muslims and Jews, where Palestinians have clashed recently with Israeli police.

The Al-Aqsa Mosque compound is the third holiest site in Islam and is built on a hilltop that is the holiest site for Jews, who refer to it as the Temple Mount. It lies at the emotional heart of the Israeli-Palestinian conflict. 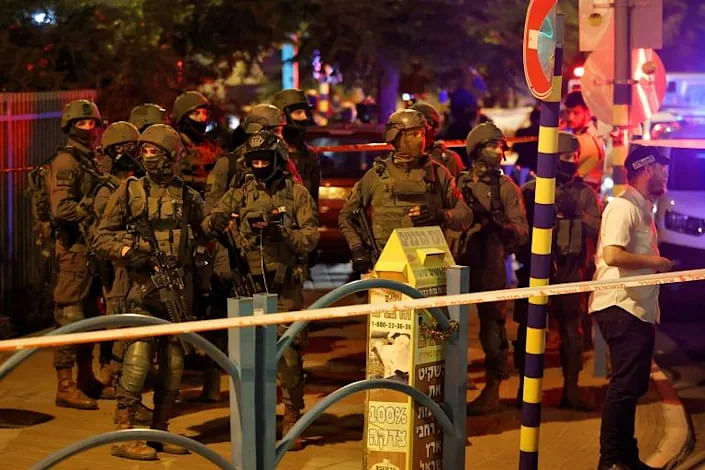