US House of Representatives Speaker Nancy Pelosi's rumoured plan for a trip to Taiwan has infuriated China and left the White House scrambling to convince her not to go.

US officials say they have little fear that China would attack Nancy Pelosi’s plane if she flies to Taiwan. But the U.S. House speaker would be entering one of the world’s hottest spots where a mishap, misstep or misunderstanding could endanger her safety. So the Pentagon is developing plans for any contingency.

Officials told The Associated Press that if Pelosi goes to Taiwan — still an uncertainty — the military would increase its movement of forces and assets in the Indo-Pacific region. They declined to provide details, but said that fighter jets, ships, surveillance assets and other military systems would likely be used to provide overlapping rings of protection for her flight to Taiwan and any time on the ground there.

Any foreign travel by a senior US leader requires additional security. But officials said this week that a visit to Taiwan by Pelosi — she would be the highest-ranking U.S. elected official to visit Taiwan since 1997 — would go beyond the usual safety precautions for trips to less risky destinations.

Is this a provocation?

China certainly seems to think so.

China sees self-ruled Taiwan as a breakaway province that will eventually be part of the country again - and has not ruled out the possible use of force to achieve this.

The potential trip has not only rankled Beijing - the Biden administration has reportedly tried to dissuade the California Democrat from going.

Last week, President Joe Biden told reporters "the military thinks it's not a good idea", but his White House has called Chinese rhetoric against any such trip "clearly unhelpful and not necessary".

Chinese officials have expressed anger over what they view as growing diplomatic engagement between Taipei and Washington. This includes a surprise visit to the island by six US lawmakers in April.

On Monday, Chinese foreign ministry spokesman Zhao Lijian warned his country would take "firm and resolute measures" if Pelosi went ahead with her visit.

"And the US will be responsible for all of the serious consequences," he said.

A spokesman of the Chinese ministry of defence seemed to suggest there could even be a military response.

"If the US side insists on going ahead, the Chinese military will never sit idle and will take strong measures to thwart any external interference and separatist attempts for 'Taiwan independence'," Colonel Tan Kefei told China Daily.

The trip is being considered at a time when China has escalated what the US and its allies in the Pacific describe as risky one-on-one confrontations with other militaries to assert its sweeping territorial claims.

The incidents have included dangerously close fly-bys that force other pilots to swerve to avoid collisions, or harassment or obstruction of air and ship crews, including with blinding lasers or water cannon.

The possible trip is highlighting the concerns within President Joe Biden's administration over China's designs on Taiwan as Beijing has stepped up its rhetoric and aggressive actions toward the island in recent months, including sending warplanes into Taiwan's self-declared air defense identification zone several times.

US officials have expressed concern that those moves could be precursors to even more aggressive steps by China in the coming months meant to assert its authority over the island.

Last week, the former editor of China's state-run Global Times newspaper suggested a "shocking military response" may be in store for Pelosi.

US officials have said the administration doubts that China would take direct action against Pelosi herself or try to sabotage the visit.

But they don’t rule out the possibility that China could escalate provocative overflights of military aircraft in or near Taiwanese airspace and naval patrols in the Taiwan Strait should the trip take place. And they don’t preclude Chinese actions elsewhere in the region as a show of strength.

Until now, Washington's policy of "strategic ambiguity" has meant the US has been deliberately unclear about whether or how it would defend Taiwan in the event of a large scale attack on the island.

The oldest and longest running of the United States' deliberately ambiguous policies was whether and how it would defend the Republic of China on Taiwan in the event of an attack by the People's Republic of China (Mainland China).

This issue is at the cornerstone of United States–Taiwan relations and a central sticking point in United States–China relations. This policy was intended to discourage both a unilateral declaration of independence by ROC leaders and an invasion of Taiwan by the PRC.

The United States seemingly abandoned strategic ambiguity in 2001 after then-President George W. Bush stated that he would "do whatever it takes" to defend Taiwan. He later used more ambiguous language, stating in 2003 that "The United States policy is one China".

In October 2021, President Biden announced a commitment that the United States would defend Taiwan if attacked by the People's Republic of China.

US military prepares for the worst

The number of intercepts by Chinese aircraft and ships in the Pacific region with U.S. and other partner forces has increased significantly over the past five years. He said Beijing’s military has become far more aggressive and dangerous, and that the number of unsafe interactions has risen by similar proportions.

Those include reports of Chinese fighter jets flying so close to a Canadian air security patrol last month that the Canadian pilot had to swerve to avoid collision, and another close call with an Australian surveillance flight in late May in which the Chinese crew released a flurry of metal scraps that were sucked into the other plane’s engine.

U.S. officials say that the prospects of an intercept or show of force by Chinese aircraft near Pelosi’s flight raises concerns, prompting the need for American aircraft and other assets to be nearby.

The U.S. aircraft carrier USS Ronald Reagan and its strike group is currently operating in the western Pacific, and made a port call in Singapore over the weekend. The strike group involves at least two other Navy ships and Carrier Air Wing 5, which includes F/A-18 fighter jets, helicopters and surveillance aircraft.

Prior to pulling into port in Singapore, the strike group was operating in the South China Sea. In addition, another Navy ship, the USS Benfold, a destroyer, has been conducting freedom of navigation operations in the region, including a passage through the Taiwan Strait last week.

Read Also
China calls US a 'bully,' vows to 'fight to the end' for Taiwan 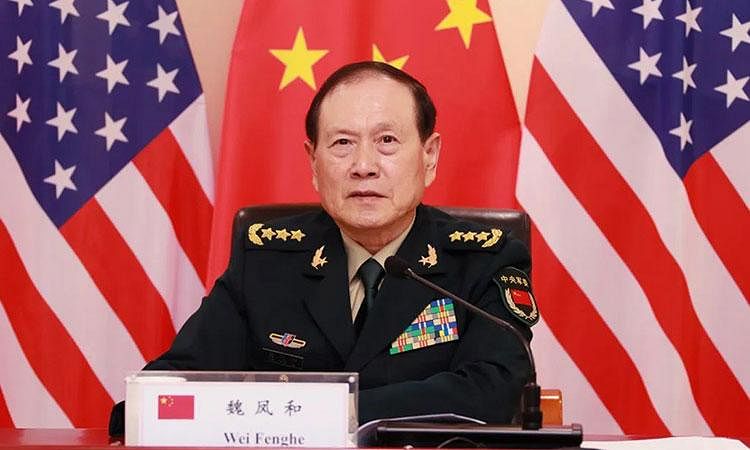 Watch: Anurag Kashyap's take on how Bollywood movies and the Indian economy are connected