China showcases 50 yrs of its hold on Tibet 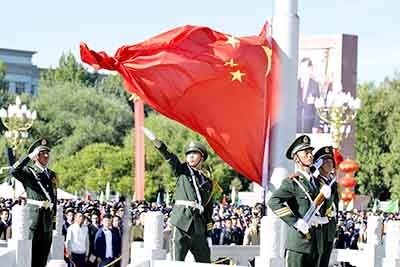 Chinese paramilitary police conduct a flag rising ceremony as thousands of people gather in front of the iconic Potala Palace in the regional capital Lhasa on September 8, 2015, for an event billed as marking 50 years since the founding of the administrative area of Tibet. China on September 8 stressed Communist party control over Tibet, with a senior official denouncing the Dalai Lama at a giant ceremony condemned by rights groups. AFP PHOTO CHINA OUT |

Beijing : China marked 50 years of Tibet’s amalgamation with the Communist giant, holding a grand parade in Lhasa showcasing its grip on the strategic Himalayan region even as it adopted a tough stance against the Dalai Lama, calling for a crackdown on “separatist forces”.

A big meeting followed by a grand parade was held in front of the Potala Palace, traditional home of the Dalai Lama from where he fled to India in 1959, attended among others by senior official of the ruling Communist Party of China (CPC), Yu Zhengsheng, to mark 50 years of Tibet being declared as an autonomous province of China.

China says Tibet became a part of the country by “peaceful liberation” when Chinese troops invaded the Himalayan plateau in 1950 establishing Beijing’s control over it.