Pakistani police officers and journalists gather near a burned van at the site of an explosion, in Karachi, Pakistan, on Tuesday, April 26, 2022 | AP
Advertisement

China on Wednesday asked Pakistan to scale-up security for its nationals working in the country and demanded a thorough investigation and punishment to the perpetrators behind the suicide attack at the Karachi University which killed three Chinese teachers and injured another.

The blood of the Chinese cannot be shed in vain, and those behind this incident will surely pay the price, a Chinese foreign ministry spokesperson said while strongly condemning the latest attack on Chinese nationals working in Pakistan.

An explosion triggered by a burqa-clad Baloch woman suicide bomber ripped through a shuttle passenger van of the Confucius Institute at the prestigious University of Karachi on Tuesday, leaving three Chinese teachers dead and one injured and causing several Pakistani casualties, in the latest targeted attack against Chinese citizens in Pakistan's financial capital.

China expressed its "strong condemnation and great indignation" at the attack, as well as deep condolences to the victims and sincere sympathy to the injured and the bereaved families, the state-run Xinhua news agency quoted the spokesperson as saying.

Chinese Assistant Foreign Minister Wu Jianghao has made an urgent phone call to the Pakistani Ambassador to China to express extremely grave concern, the report said.

Wu demanded that the Pakistani side should immediately conduct a thorough investigation into the incident, apprehend and punish the perpetrators to the full extent of the law, and take all possible measures to ensure the safety of Chinese citizens in Pakistan and prevent such incidents from happening again, the spokesperson said.

The Chinese Foreign Ministry and Chinese diplomatic missions in Pakistan will continue to urge relevant Pakistani departments to handle properly the follow-up matters of those killed, treat the injured, and resolutely crack down on the terrorist organisation involved, the spokesperson said.

A spokesperson for the university said that three of the victims were Chinese nationals. They were identified as Confucius Institute Director Huang Guiping, Ding Mupeng, Chen Sa and Khalid, the Pakistani driver.

The spokesperson added that two others -- Chinese national Wang Yuqing and a Pakistani man Hamid -- were injured in the blast.

The Baloch Liberation Army – one of several groups fighting for independence in Pakistan’s biggest province – claimed responsibility for the blast at the University of Karachi on Tuesday, saying in a statement on Telegram that it was their first suicide attack by a woman assailant.

Chinese targets have regularly been attacked by separatists from Balochistan, where Beijing is involved in huge infrastructure projects as part of its Belt and Road Initiative.

Karachi police chief Ghulam Nabi Memon said security camera footage from the site showed a person dressed in a burqa walking up to the van, followed by an instantaneous explosion.

Tensions have flared in recent years in Balochistan following a huge influx of Chinese investment.

Baluchistan has long been the scene of a low-level insurgency by armed Baluch groups demanding more autonomy and a greater share in the region’s natural resources if not outright independence from Islamabad.

However, the Pakistani Taliban have also targeted Chinese interest in the past. Last July, the group — also known as the Tehreek-e-Taliban Pakistan — claimed responsibility for an attack on a bus that killed nine Chinese nationals in Pakistan’s northwestern Khyber Pukhtunkhwa province. Four Pakistanis also died in that attack.

The Pakistani Taliban are a separate group from the Afghan Taliban, their allies who have seized power in neighboring Afghanistan.

Thousands of Chinese workers are living and working in Pakistan, with most of them involved in Beijing’s multibillion-dollar “One Belt One Road Project” that is to connect south and central Asia with the Chinese capital.

A key road linking Pakistan’s southern port of Gwadar, in southwestern Baluchistan province, with China’s northwest Xinjiang province, is part of what is known as the China-Pakistan Economic Corridor. The project includes a number of infrastructure projects and several power projects. 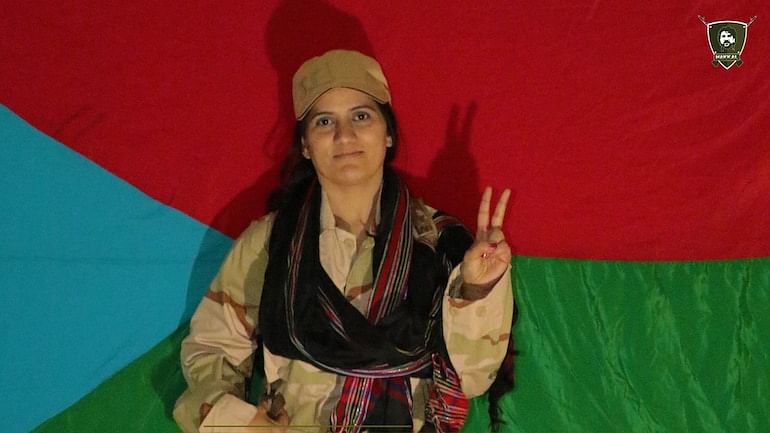 Pakistan: Beaming with pride,' says husband of female suicide bomber who blows herself up at Karachi...