Ottawa Police Chief Peter Sloly lost his job after failing to move decisively against the bumper-to-bumper demonstration by hundreds of truck drivers.

Ottawa: Ottawa's police chief was ousted Tuesday amid criticism of his inaction against the trucker protests that have paralysed Canada's capital for over two weeks, while the number of blockades maintained by demonstrators at the U.S. border dropped to just one.

The twin developments came a day after Prime Minister Justin Trudeau invoked Canada's Emergencies Act and threatened to take tough legal and financial measures to end the unrest in Ottawa and beyond by protesters decrying the country's COVID-19 restrictions and Trudeau's government.

Ottawa Police Chief Peter Sloly lost his job after failing to move decisively against the bumper-to-bumper demonstration by hundreds of truck drivers. The protests by the so-called Freedom Convoy have infuriated many residents, who have complained of being harassed and intimidated on the streets.

"Like other residents in Ottawa, I have watched in disbelief as this carnival chaos has been allowed to continue," Diane Deans, chair of the Ottawa Police Services Board, said in announcing Sloly's departure. She added that the protesters had turned downtown into a street party with big screens, hot tubs and an outdoor gym.

Sloly said in a statement that he did everything possible to keep the city safe, calling it an "unprecedented and unforeseeable crisis." Ottawa's police board said 360 vehicles remained involved in the blockade in the city's core, down from a high of roughly 4,000. A command center was set up so that the Royal Canadian Mounted Police and the Ontario Provincial Police could assume command over the situation, apparently relegating Ottawa police to a secondary role.

Interim Ottawa Police Chief Steve Bell said he believes authorities have reached a turning point: "I believe we now have the resources and partners to put a safe end to this occupation." Meanwhile, trucks with horns blaring rolled out of the Alberta border town of Coutts, across from Montana, ending the siege that had disrupted trade for more than two weeks. Police earlier this week arrested 13 people at the site and seized guns and ammunition. Four men also faces a charge of conspiracy to murder RCMP officers.

The end of the blockade there apparently left just one obstructed border crossing, at Emerson, Manitoba, opposite North Dakota, according to authorities. And the Mounties said they were confident the protesters there soon would be leaving and gone by Wednesday.

Over the weekend, police broke the blockade at the busiest and most important crossing, the Ambassador Bridge between Windsor, Ontario, and Detroit, arresting dozens of demonstrators. The nearly week-long protest disrupted auto production in both countries, but it was returning to normal on Tuesday.

Protesters in the capital appeared to be more entrenched.

Erik Mueller, a truck driver who quit his job to join the blockade in Ottawa, called the emergency measures targeting the drivers "insane." "We are not backing off," he said. "We have too much to lose." Wayne Narvey said he took a leap of faith a week ago and drove his 30-year-old motor home from New Brunswick through a snowstorm to get to the capital.

"They can take our bank accounts, they can freeze our assets, they can take the insurance off our vehicles," he said. "They can play all the games they want. We're not leaving." Canada's Emergencies Act allows the government to ban the blockades and begin towing away trucks. Officials said it forbids bringing children to illegal protest sites. Authorities have said the faceoff in Ottawa has posed problems because of the presence of children.

The government can also freeze truckers' bank accounts and suspend their licenses, and target crowd-funding sites that are supporting the blockades. And officials under the emergency provisions, the government can also force tow trucks to remove rigs. Up to now, some towing companies have been reluctant to cooperate out of sympathy with the truckers or fear of violence.

Ontario Premier Doug Ford, whose province includes both Ottawa and Windsor, said: "Hopefully the police in the next few days, hopefully sooner, can move." Trudeau's decision to invoke the Emergencies Act came amid growing frustration with government inaction and fears of violence.

The siege in Alberta, where guns were confiscated, showed that "you got a very small, hardened core driven by ideology," Canadian Public Safety Minister Marco Mendicino said. "We have been fortunate thus far there has not been mass violence." 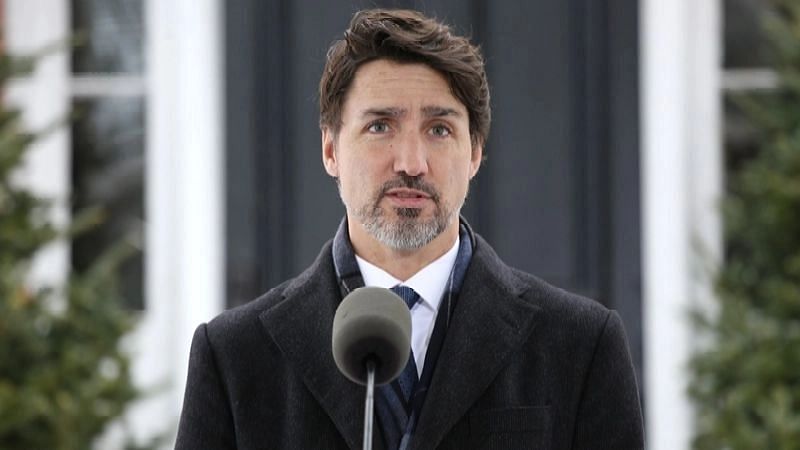