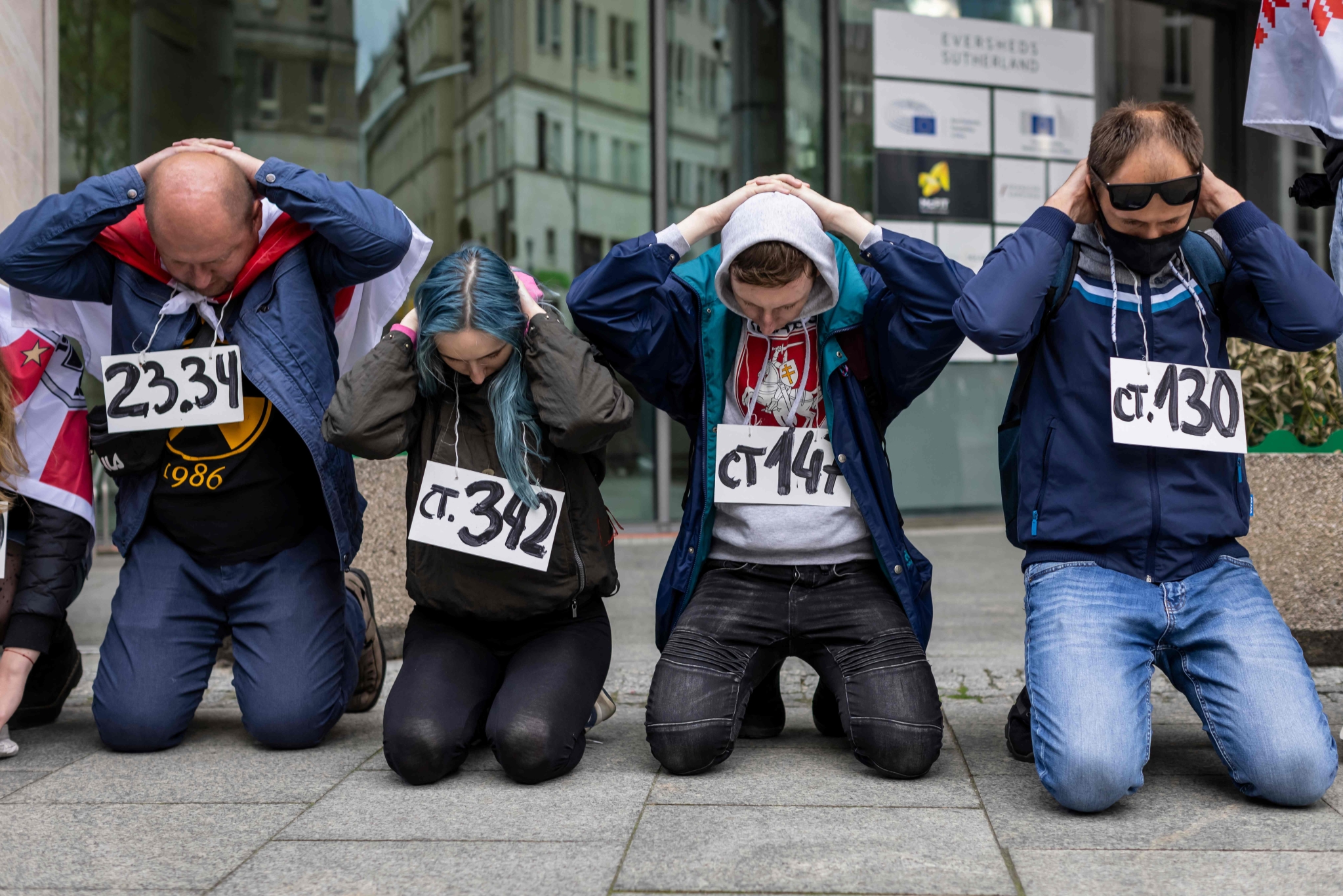 Belarusian activists protest in front of the European Commission office in Warsaw, on May 29, with placards showing the criminal code paragraph numbers that were used in order to detain opposition journalist Roman Protasevich. | 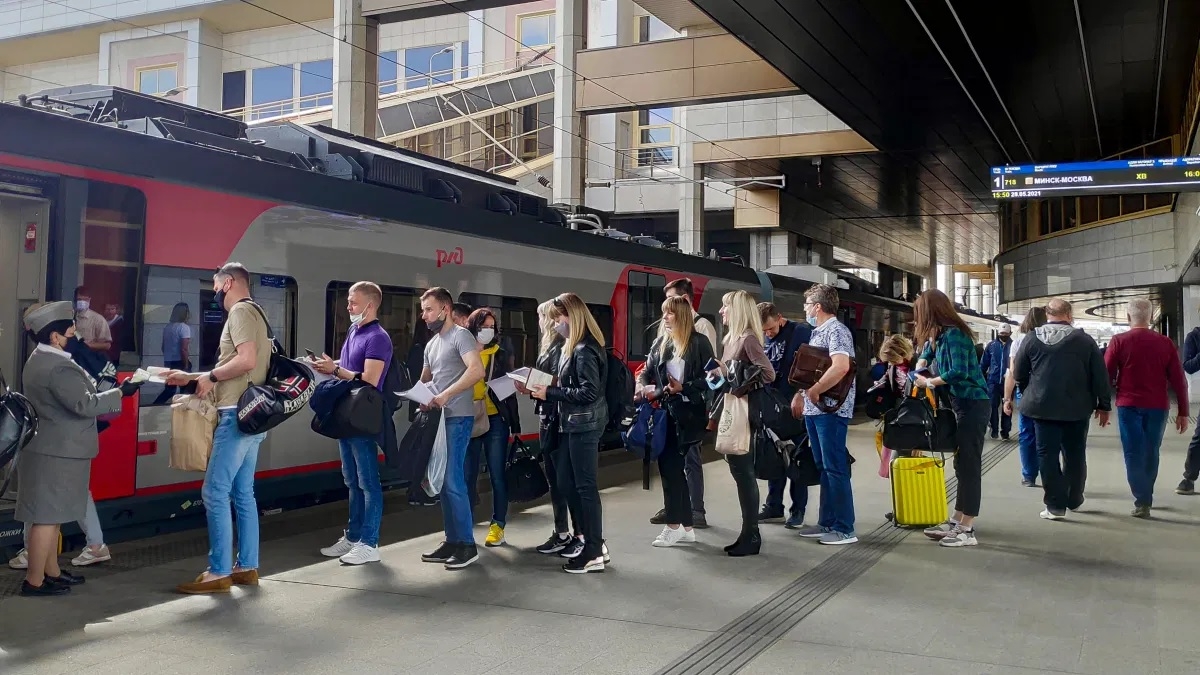 As fear of repression rises among Belarusians following the arrest of a dissident journalist whose plane was forcibly diverted to Minsk, those who want to leave the country are feeling increasingly cornered.

Its land borders already were under tight restrictions, and now the European Union has banned flights from Belarus after a jetliner was diverted to Minsk earlier this week and authorities arrested a dissident journalist who was aboard.

That leaves opposition-minded Belarusians with few options to get out from under the authoritarian rule of President Alexander Lukashenko.

"Shutting the borders turns Belarus into a can of rotting preserves. We are being turned into hostages," said Tatsiana Hatsura-Yavorska, who leads a rights group that helps those released from prison adapt to life and also organizes documentary film festivals.

"The authorities have scaled up repressions in recent months to incite the atmosphere of fear," she told The Associated Press.

Hatsura-Yavorska said most of her friends and associates have faced detention, searches and brutal beatings, and many have fled Belarus.

She served 10 days in jail after organizing a photo exhibition about medical workers in the coronavirus pandemic that authorities decided leaned toward the opposition. She faces charges that could land her in prison for three years.

Lukashenko, who has led the former Soviet nation of 9.3 million for more than a quarter century, has faced unprecedented protests after his reelection to a sixth term in an August 2020 vote that the opposition rejects as rigged.

He has responded to the demonstrations with a fierce clampdown that has left more than 35,000 people arrested and thousands of them beaten.

Hatsura-Yavorska said following her arrest last month, she was put in an ice cold cell for two days without a mattress and was forced to wake up every two hours at night.

The authorities released her after 10 days on the condition she not leave the city pending a criminal investigation on charges of "organizing actions that violate public order." "Who would like to remain in such a country?" she said by phone. "The authorities have divided all citizens into loyalists and enemies, and treat us accordingly." Hatsura-Yavorska's Ukrainian husband was ordered to leave Belarus along with their 9-year-old son and was barred from returning for 10 years.

"They used my son to blackmail me. They beat me during interrogations and threatened to put me in jail and pushed me out of the country in the end," Volodymyr Yavorskyy told the AP in Kyiv. "I couldn't imagine that I would find myself in hell in the middle of Europe. Belarus is being shut closed right before our eyes, and millions of Belarusians are finding themselves hostage." He communicates with his wife via the internet, but fears the Belarusian authorities will move to tighten controls over it.

"Public protest has continued, and so the authorities ... close everything they can reach - borders, organisations and websites," he said. "They are turning Belarus into a scorched land." Belarus tightened restrictions at its land border in December. Those willing to cross must explain their reason, such as work, medical care or education, and can only do it once every six months.

On Sunday, a Ryanair plane traveling from Greece to Lithuania with dissident journalist Raman Pratasevich aboard wlas diverted to Minsk after Belarusian flight controllers told the jet's crew to land there because of a bomb threat.

Authorities then arrested Pratasevich, who ran a channel on a messaging app that was used to organise demonstrations against Lukashenko.

EU leaders denounced it as akin to air piracy and responded by barring Belarusian carriers from the bloc's airspace and airports.

"The air boycott has hurt not only the regime but ricocheted against its opponents willing to leave the country," said Artyom Shraybman, a Minsk-based independent political analyst.

While Belarusian carriers have been banned from EU airspace, they are allowed to fly to other destinations.

Arriving in Tbilisi, Georgia, on a flight from Belarus, a man said "people are trying to leave and those who can go to Europe are trying to do so." The traveller, who asked to be identified only by his first name, Anatoly, for fear of reprisal, said the Ryanair flight's diversion has deepened his concerns about his country's course, noting that "people can't guarantee their future, can't guarantee the future of their children." Alena, another Belarusian traveler who similarly asked for her last name to be withheld, said people who can afford to leave Belarus will try to do so amid what she described as a "brutal" government response to protests.

Sviatlana Tsikhanouskaya, the main opposition challenger in the August vote, urged the EU to ramp up sanctions and banish Belarus from Interpol and the International Civil Aviation Organization to increase pressure on Lukashenko's regime.

But she also demanded that the country's land borders be open.

"I understand the EU's decision to halt flights over Belarus as it's a matter of security for all Europeans," said Tsikhanouskaya, who fled to neighboring Lithuania under pressure from the government shortly after the election.

"But we demand to open the land borders for free travel of Belarusian citizens, because we can't allow the regime to turn our country into a prison for 9 million people."