Lee, who resigned as chief secretary last week before declaring he would run for chief executive, is the only candidate formally entered so far for the May 8 vote. He is considered Beijing’s favored candidate and a sign of the central government further tightening its control over the territory

Hong Kong’s former No. 2 official John Lee said Wednesday he had formally registered his candidacy in the election for the top job after securing 786 nominations to enter the race.

Lee, who resigned as chief secretary last week before declaring he would run for chief executive, is the only candidate formally entered so far for the May 8 vote. He is considered Beijing’s favored candidate and a sign of the central government further tightening its control over the territory.

Lee’s 786 nominations are well over 50% of the 1,454-member Election Committee that will select the next chief executive. The nomination period ends Saturday and the committee will elect the winner by absolute majority.

“It is not easy, as I have been working very hard to explain to various members what my election platform will be like,” Lee told reporters.

He reiterated that he will focus on a results-oriented approach to solve problems, keeping Hong Kong competitive and setting a firm foundation for the development of Hong Kong.

Lee formally submitted his bid on Wednesday after securing enough nominations and is the only candidate in the running for chief executive, the highest-ranking local leadership position in the Chinese territory.

Until April 6, Lee held the post of Chief Secretary of Administration, the city’s number two spot, but resigned so he would qualify as a candidate to replace the current Chief Executive Carrie Lam, who said last week that she would not run for a second term.

Unlike Lam, a career civil servant who has overseen issues like housing, health, and trade, Lee’s background is law and order.

After announcing his run, he told reporters that his term in office would offer “a new symphony” with him as the “conductor”.

Lee joined the Hong Kong police force in 1977 according to his government biography and rose through the ranks to become Assistant Commissioner of Police in 2003. Between 2012 and 2021, he served as both Under Secretary for Security and then Secretary for Security before he was appointed to his most recent post in 2021.

As a former police officer, he also stands outside Hong Kong’s political establishment, a significant selling point for Beijing, said one former lawmaker who spoke on condition of anonymity.

Past chief executives like Tung Chee-hwa and CY Leung had deep ties to the business community, while Donald Tsang and Lam both rose through the colonial civil service before taking on more senior roles after the United Kingdom returned the territory to Chinese rule in 1997.

Hong Kong’s leader is chosen every five years, although the selection process is carefully orchestrated behind the scenes by Beijing. The four chief executives selected since Hong Kong’s handover have all been candidates seen as favored by Beijing.

Lee told reporters Tuesday that enacting Article 23 of the Basic Law — which stipulates that Hong Kong enacts its own security law — will be a “priority.” Enacting such a law was temporarily shelved after mass protests against the government in 2003.

Hong Kong’s own security law should prohibit acts of treason and the theft of state secrets, as well as other offences including secession, sedition and subversion.

Lee, 64, rose in the civil service ranks after years in the police force. He previously said he was running for the No. 1 position out of his loyalty and love for Hong Kong, as well as a “sense of duty to the Hong Kong people.”

He also said loyalty was the “basic requirement” to run as a leader of the city — comments made after Hong Kong’s electoral laws were amended last year to ensure that only “patriots” loyal to Beijing can hold office.

The new Hong Kong leader will take office on July 1. 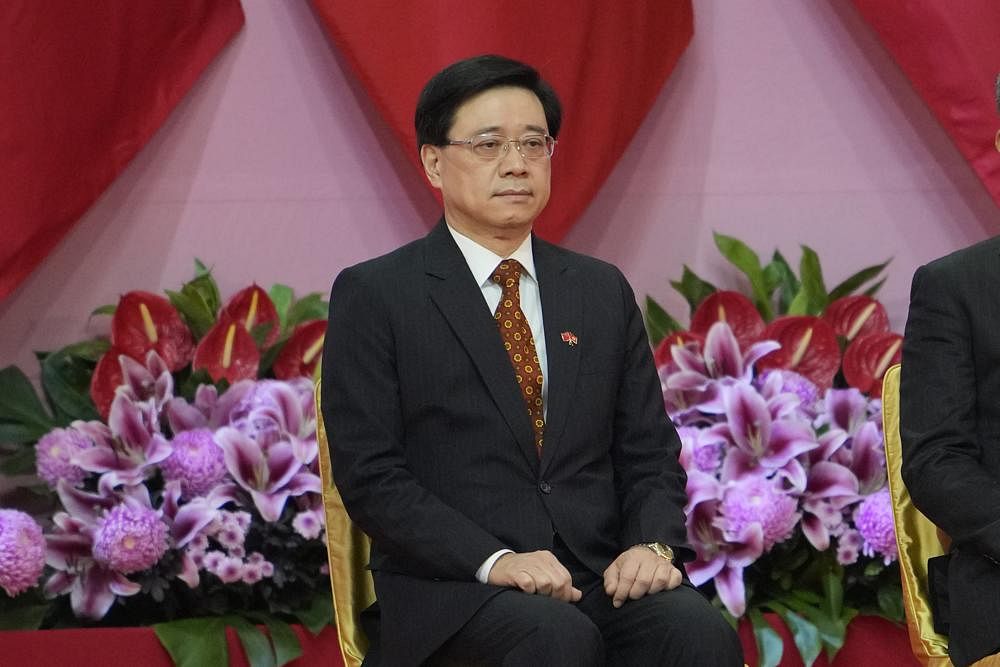