HomeWorldAfghanistan can't be 'controlled from outside', will continue to support it: Pakistan PM Imran Khan at SCO summit

Afghanistan can't be 'controlled from outside', will continue to support it: Pakistan PM Imran Khan at SCO summit

Islamabad: Pakistan Prime Minister Imran Khan on Friday said Afghanistan could not be "controlled from the outside" and that Islamabad will continue to support the war-torn neighbouring country even as he urged the Taliban to fulfil the promises they have made.

"There is a rare opportunity to finally end the 40 years of war in Afghanistan; this moment should not be squandered," he said.

Addressing the 20th Shanghai Cooperation Organisation Council of Heads of State (SCO-CHS) Summit in Tajikistan's capital, Dushanbe, Khan added that that a "new reality" has been established in Afghanistan after the Taliban seized power in Kabul. He also said that it is now in the international community's "collective interest" to ensure that there is no renewed conflict in the war-torn country and it will never again become a safe haven for terrorists.

"That all this happened without bloodshed, without civil war, and without mass exodus of refugees, should be a matter of relief," Khan said, adding that it is now in the international community's collective interest to ensure that there is no renewed conflict in Afghanistan and the security situation is stabilised.

"We must remember that the Afghan government is primarily depended on foreign aid," he was quoted as saying by the Dawn newspaper.

"The Taliban must fulfil the promises they have made. Pakistan has a vital interest in a peaceful and stable Afghanistan and will continue to lend its support," Khan said, adding that Afghanistan could not be "controlled from the outside". 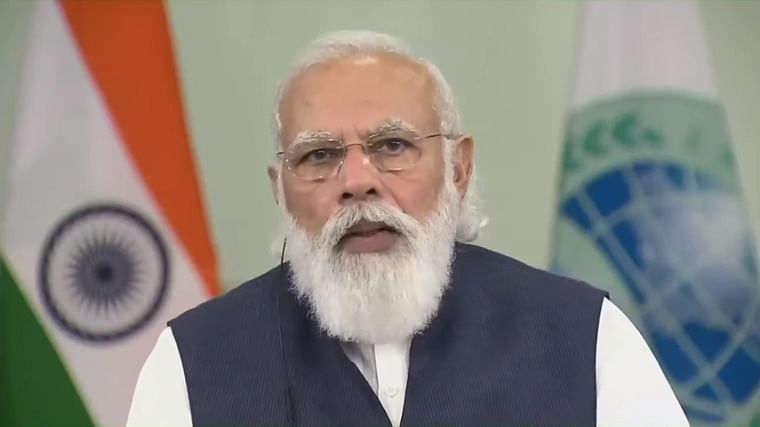 The Taliban seized power in Afghanistan on August 15, two weeks before the US' complete troop withdrawal on August 31 after a costly two-decade war. This forced Afghan President Ashraf Ghani to flee the country to the UAE.

The eight-member SCO grouping of China, Russia, Kazakhstan, Kyrgyzstan, Tajikistan, Uzbekistan, India and Pakistan is holding its 21st summit at Dushanbe. Afghanistan is an observer in the SCO.

Khan said that guided by the "Shanghai Spirit", the SCO has steadily grown in size and stature. "Today, SCO cumulatively represents 44 per cent of the world's population, 25 per cent of global landmass and 20 per cent of the global GDP. "For our part, we must resist any drift towards bloc politics and stress that peaceful coexistence and cooperation - not confrontation -should be the main drivers of global politics," Khan said.

On the question of COVID-19's origin, Khan backed Pakistan's "all-weather ally" China. "We believe science should continue to guide the world's efforts as it combats the pandemic. Attempts to politicise the question of virus origin should be avoided as it is divisive at a time when the world needs to unite," he said.

The vaccine should also be available to everyone on an equitable basis, and as a global public good, Khan said.

On the issue of terrorism, he said: "As the world marked the 20th anniversary of the 9/11 attacks, we were all reminded that despite international community's earnest efforts, the threats posed by terrorism still persist.

"Associating one religion with terrorism has enabled far-right, populist and supremacist groups around the world to propagate, multiply and accumulate influence".

Khan said that Pakistan has suffered over 80,000 casualties and economic losses in excess of USD 150 billion, apart for millions with internal displacement.

Addressing threats to international and regional peace and security is a vital interest for the SCO. "We believe faithfully implementing UN Security Council resolutions for peaceful settlement of outstanding disputes is a necessary condition for peace, and indispensable for creating an environment of cooperation. Unilateral and illegal measures to change the status of disputed territories in violation of Security Council resolutions run counter to this objective. Such measures must be condemned and opposed firmly for being in violation of the SCO Charter and its well-established principles of inter-state relations," Khan said.

On connectivity, Prime Minister Khan said the web of rail, road, sea and air links across the SCO region will usher in a new era of enhanced trade, energy flows, and people-to-people exchanges.

These trans-regional linkages will be reinforced by the China-Pakistan Economic Corridor (CPEC), the flagship project of China's Belt and Road Initiative (BRI), which is making steady progress, he said.

He also commended the SCO for completing 20 years and said Pakistan would continue to play its role as a member of the group.