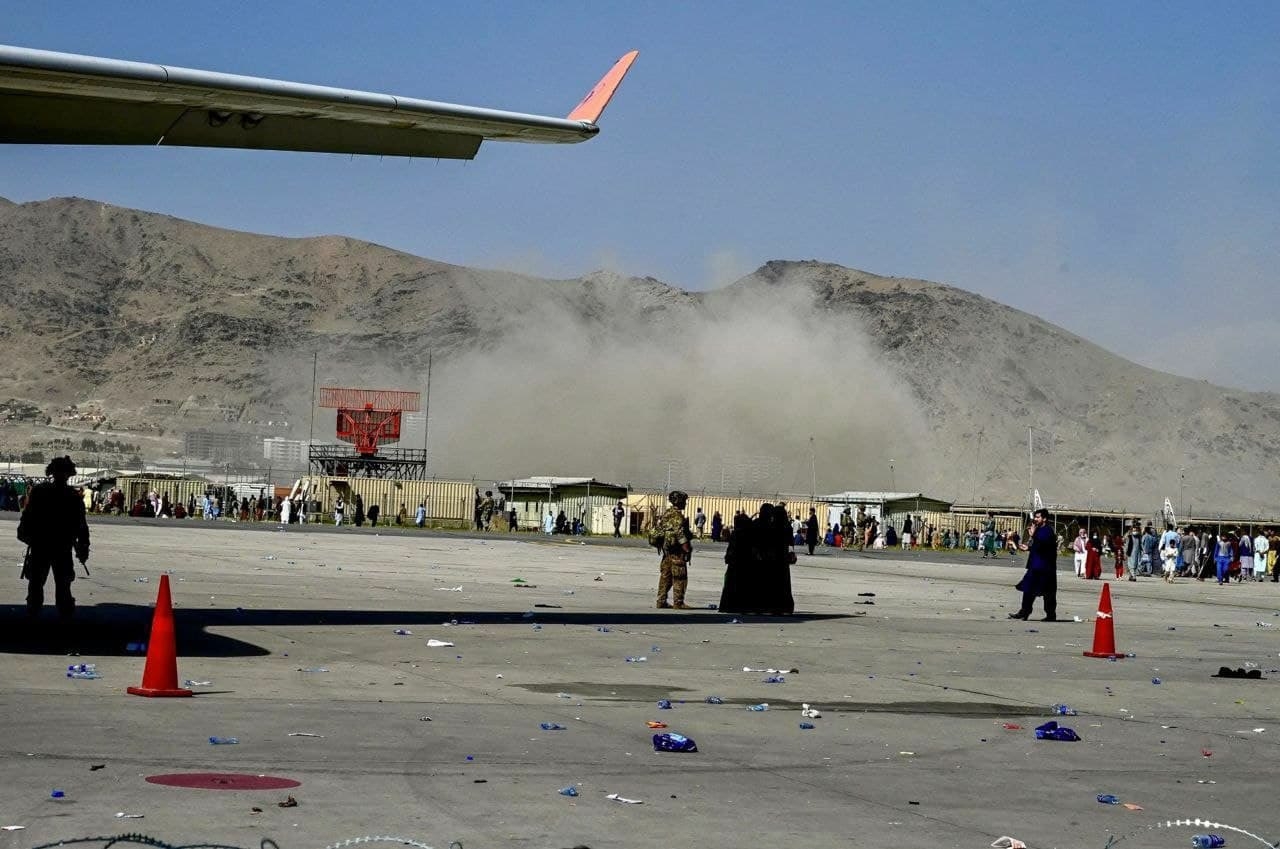 An ISIS suicide bomber was responsible for the explosion outside the Kabul airport on Thursday, per a US official and a source, reported Politico.

Earlier, two explosion went off Thursday outside Kabul's airport, where thousands of people have flocked as they try to flee the Taliban takeover of Afghanistan. Western nations had warned of a possible attack there in the waning days of a massive airlift.

At least 13 people were killed and wounded, including foreigners, in the blast.

A second blast was reported within a span of few minutes.

The Pentagon confirmed the blast and said, "We can confirm that the explosion near the Abbey Gate of the Kabul airport has resulted in an unknown number of casualties. We will continue to update."

Several countries urged people to avoid the airport earlier in the day, with one saying there was a threat of a suicide bombing. But just days - or even hours for some nations - before the evacuation effort ends, few appeared to heed the call.

Over the last week, the airport has been the scene of some of the most searing images of the chaotic end of America's longest war and the Taliban's takeover, as flight after flight took off carrying those who fear a return to the militants' brutal rule.

Already, some countries have ended their evacuations and begun to withdraw their soldiers and diplomats, signaling the beginning of the end of one of history's largest airlifts. The Taliban have pledged not to attack Western forces during the evacuation, but insist the foreign troops must be out by America's self-imposed deadline of Aug. 31.

Overnight, warnings emerged from Western capitals about a threat from Afghanistan's Islamic State group affiliate, which likely has seen its ranks boosted by the Taliban's freeing of prisoners during their blitz across the country.

British Armed Forces Minister James Heappey told the BBC early Thursday there was "very, very credible reporting of an imminent attack" at the airport, possibly within "hours." Belgian Prime Minister Alexander De Croo said his country had received information from the U.S. and other countries about the "threat of suicide attacks on the mass of people." The acting U.S. ambassador to Kabul, Ross Wilson, said the security threat at the Kabul airport overnight was "clearly regarded as credible, as imminent, as compelling." But in an interview with ABC News, he would not give details and did not say whether the threat remained.

Hours later, the blast was reported.

Wilson also said there remain "safe ways" for Americans to reach the airport, but "there undoubtedly will be" Afghans who had worked with or for the U.S. in Afghanistan who will not be able to get out before the evacuation ends.

Late Wednesday, the U.S. Embassy warned citizens at three airport gates to leave immediately due to an unspecified security threat. Australia, Britain and New Zealand also advised their citizens Thursday not to go to the airport, with Australia's foreign minister saying there was a "very high threat of a terrorist attack." Taliban spokesman Zabihullah Mujahid denied that any attack was imminent in the wake of those warnings.

Earlier Thursday, the Taliban sprayed a water cannon at those gathered at one airport gate to try to drive the crowd away, as someone launched tear gas canisters elsewhere. While some fled, others just sat on the ground, covered their faces and waited in the noxious fumes.

Nadia Sadat, a 27-year-old Afghan, carried her 2-year-old daughter with her outside the airport. She and her husband, who had worked with coalition forces, missed a call from a number they believed was the State Department and were trying to get into the airport without any luck. Her husband had pressed ahead in the crowd to try to get them inside.

"We have to find a way to evacuate because our lives are in danger," Sadat said. "My husband received several threatening messages from unknown sources. We have no chance except escaping." Gunshots later echoed in the area as Sadat waited. "There is anarchy because of immense crowds," she said, blaming the U.S. for the chaos.

Aman Karimi, 50, escorted his daughter and her family to the airport, fearful the Taliban would target her because of her husband's work with NATO.

"The Taliban have already begun seeking those who have worked with NATO," he said. "They are looking for them house-by-house at night." Many Afghans share those fears. The hard-line Islamic group wrested back control of the country nearly 20 years after being ousted in a U.S.-led invasion following the 9/11 attacks, which al-Qaida orchestrated while being sheltered by the group.

Senior U.S. officials said Wednesday's warning from the embassy was related to specific threats involving the Islamic State group and potential vehicle bombs. The officials spoke on condition of anonymity because they were not authorized to discuss ongoing military operations.

The Islamic State affiliate in Afghanistan grew out of disaffected Taliban members who hold an even more extreme view of Islam. The Sunni extremists have carried out a series of brutal attacks, mainly targeting Afghanistan's Shiite Muslim minority, including a 2020 assault on a maternity hospital in Kabul in which they killed women and infants.

The Taliban have fought against Islamic State militants in Afghanistan. But IS fighters were likely freed from prisons along with other inmates during the Taliban's rapid advance. Extremists may have seized heavy weapons and equipment abandoned by Afghan troops.

Amid the warnings and the pending American withdrawal, Canada ended its evacuations, and European nations halted or prepared to stop their own operations.

"The reality on the ground is the perimeter of the airport is closed. The Taliban have tightened the noose. It's very, very difficult for anybody to get through at this point," said Canadian General Wayne Eyre, the country's acting Chief of Defense Staff.

A third official said that the U.S. worked with its allies to coordinate each country's departure, and some nations asked for more time and were granted it.

"Most depart later in the week," he said, while adding that some were stopping operations Thursday. All three officials spoke on condition of anonymity because they were not authorized to discuss the information publicly.

French Prime Minister Jean Castex told RTL radio his country's efforts would stop Friday evening. Danish Defense Minister Trine Bramsen bluntly warned: "It is no longer safe to fly in or out of Kabul." Denmark's last flight has already departed, and Poland and Belgium have also announced the end of their evacuations. The Dutch government said it had been told by the U.S. to leave Thursday.

But Pentagon spokesman John Kirby said some planes would continue to fly.

"Evacuation operations in Kabul will not be wrapping up in 36 hours. We will continue to evacuate as many people as we can until the end of the mission," he said in a tweet.

The Taliban have said they'll allow Afghans to leave via commercial flights after the deadline next week, but it remains unclear which airlines would return to an airport controlled by the militants. Turkish presidential spokesman Ibrahim Kalin said talks were underway between his country and the Taliban about allowing Turkish civilian experts to help run the facility.

The Taliban have promised to return Afghanistan to security and pledged they won't seek revenge on those who opposed them or roll back progress on human rights. But many Afghans are skeptical.

An Afghan journalist from private broadcaster Tolo News described being beaten by Taliban. Ziar Yad said the fighters also beat his colleague and confiscated their cameras, technical equipment and a mobile phone as they tried to report on poverty in Kabul.

"The issue has been shared with Taliban leaders; however, the perpetrators have not yet been arrested, which is a serious threat to freedom of expression," Yad wrote on Twitter.