Zagreb: This capital city of Croatia is all about gothic cathedrals, medieval monuments and legendary stories

The author recounts her mesmerising visit to the capital of Croatia, which was full of education, culture, legends and mystical beauty
Manjiri Prabhu 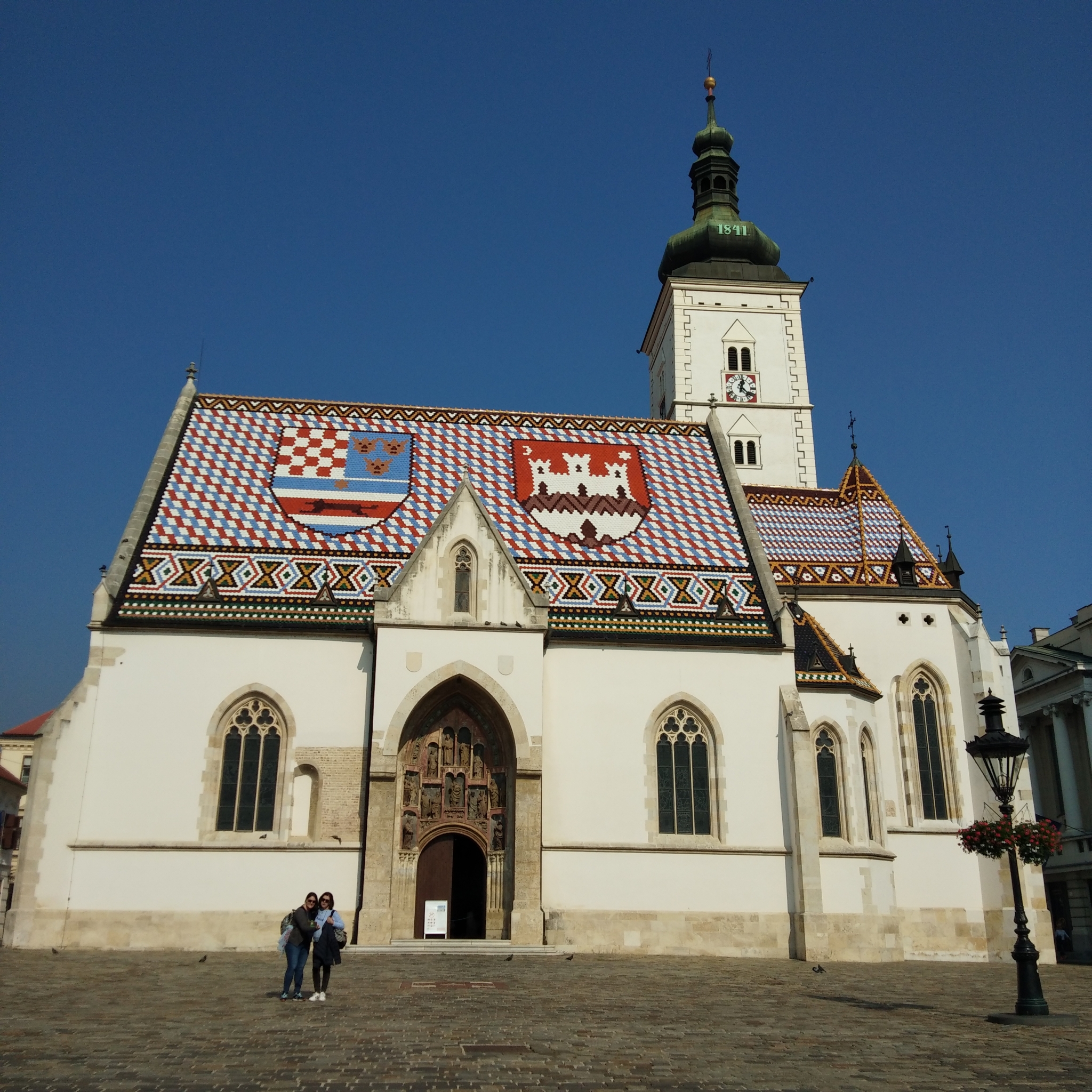 Zagreb, the capital of Croatia, has a special significance for me. It is said that if you ask the Universe a question, it does respond with an answer. And, it was in this beautiful old town that I asked the Universe for a certain sign and a message and the Universe gave me an answer! So, now you can imagine my fondness for the city, but more about that later...

My friends Ameeta, Sarita, Lochana and I continued our trip from Ljubljana to Zagreb by bus. Our first impressive introduction to the city was its expansive Ban Jelačić Square in the centre of the pedestrian zone. The paved stone blocks, the tall buildings with age-old façades surrounding it, the eye-catching statue of Ban Josip Jelačić, the view of the tall spires of the Cathedral and the trams gliding by were a delightful scene out of a film. But the most charming part of the square was the Manduševac, the historic fountain in a hollow, shallow basin on one side of the Square. 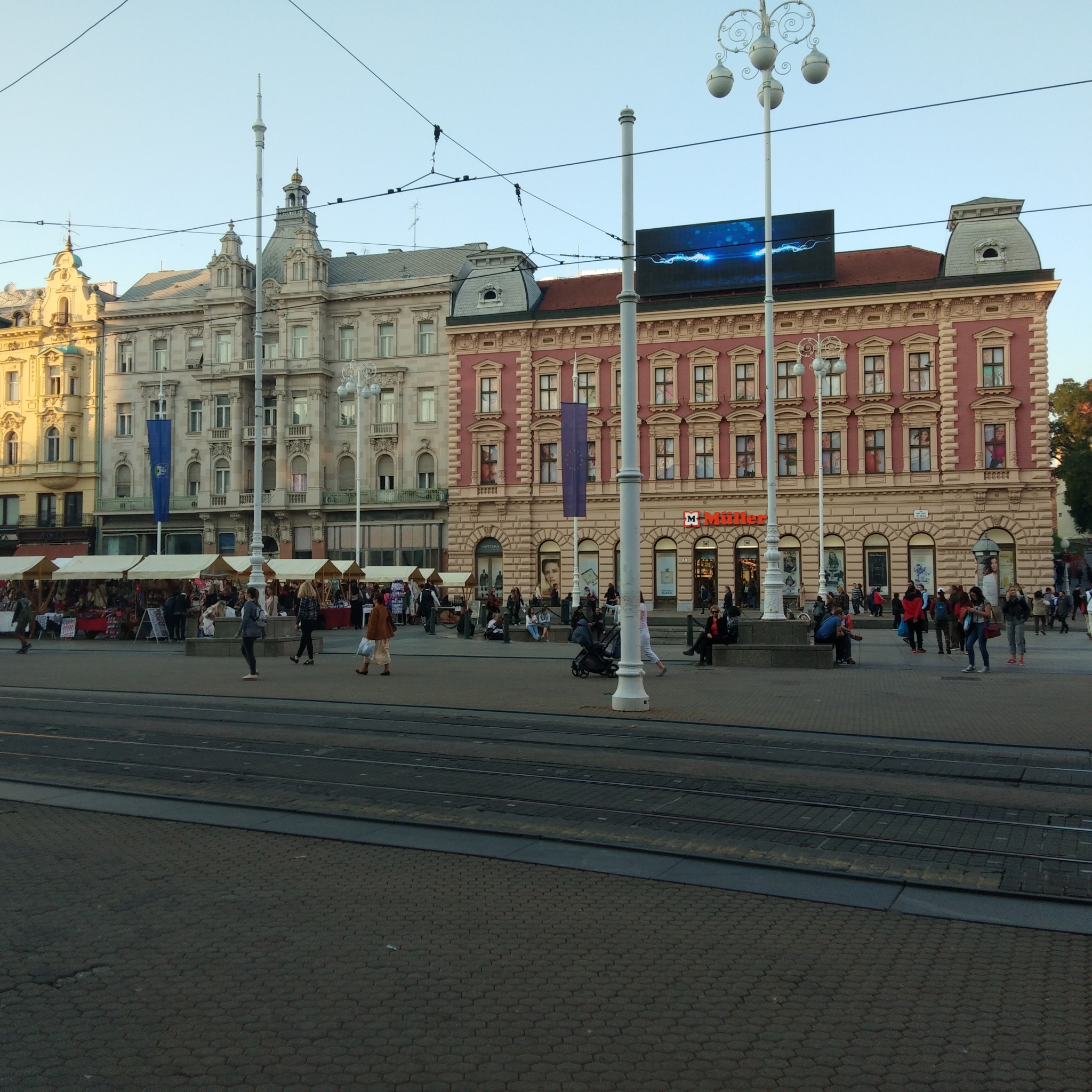 Legend says that the entire region was once a desert. One day, a military commander was stopped by his tired and thirsty army. He then banged his stick on the parched earth and water sprung out of the cracks. A girl named Magdalena was passing by. The commander requested her: “Mando, dušo, zagrabi vode” (Manda, sweetheart, grab me some water). Apparently, the spring Manduševac got its name from his words — mando and dušo — and the town which came up around the stream became Zagreb from zagrabi. Today, tourists relax around the circle of the sprouting fountain, which is aptly known as the ‘Spring of Good Fortune’, and throw coins in it for good luck. High school students entering into adulthood take a quick dip for blessings. The little fountain was a happy, bubbling presence with an invitation to unwind. 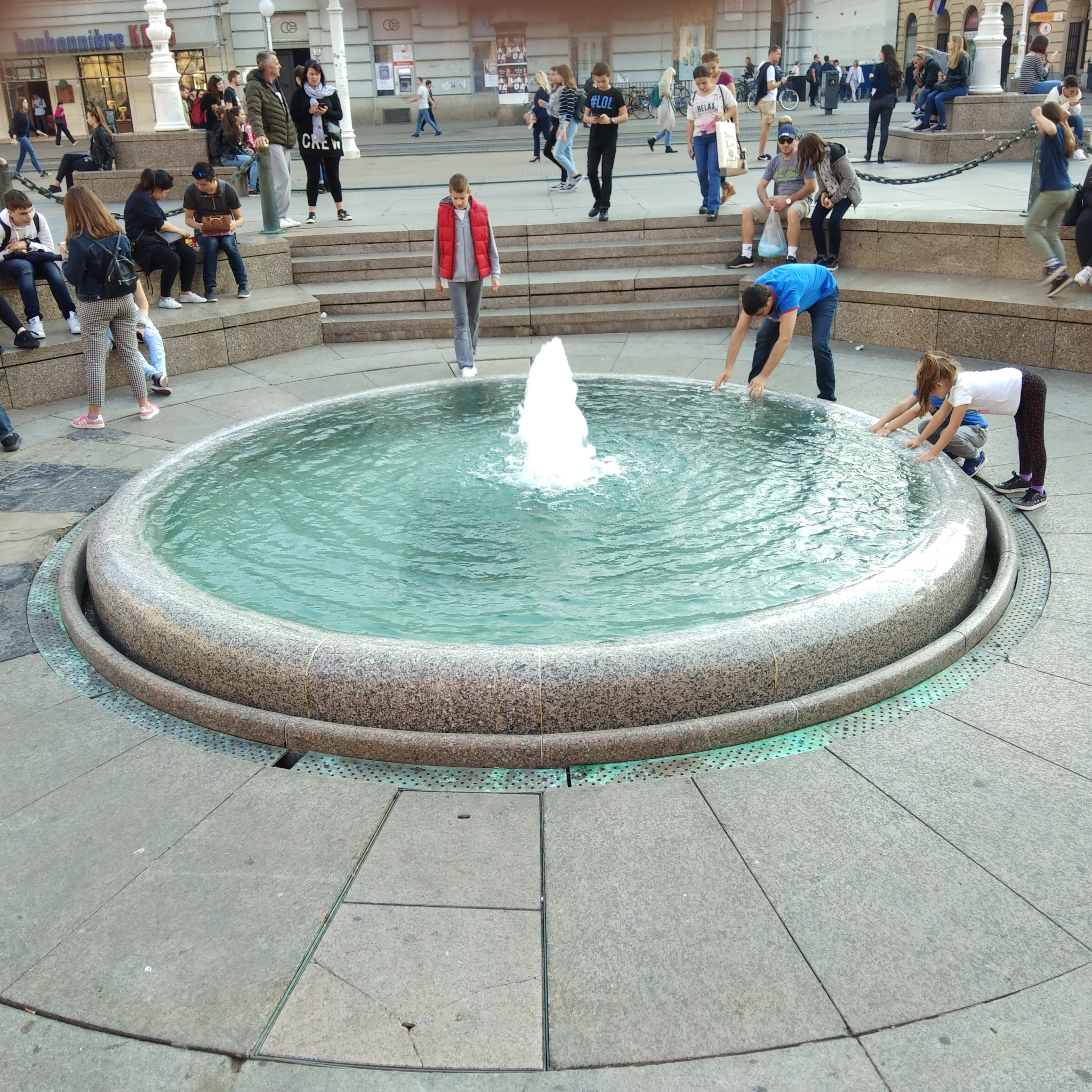 The fountain | Photos and copyright @ManjiriPrabhu

I muttered my little prayer as my friends explored the exotic farmers’ market in the centre of the Square. Close to the Square, we also discovered a statue of Construction Dog Pluto. Folklore says that a starved stray dog, Pluto, came to a construction site and stayed there to protect the workers from thieves. Towards the end of the construction work, Pluto was killed during a conflict between workers. In memory of the dog’s love and loyalty, a memorial plaque was put up. For a dog lover like me, it was a reassuring thought that no matter which part of the world you are in, dogs are synonymous with love and friendship. 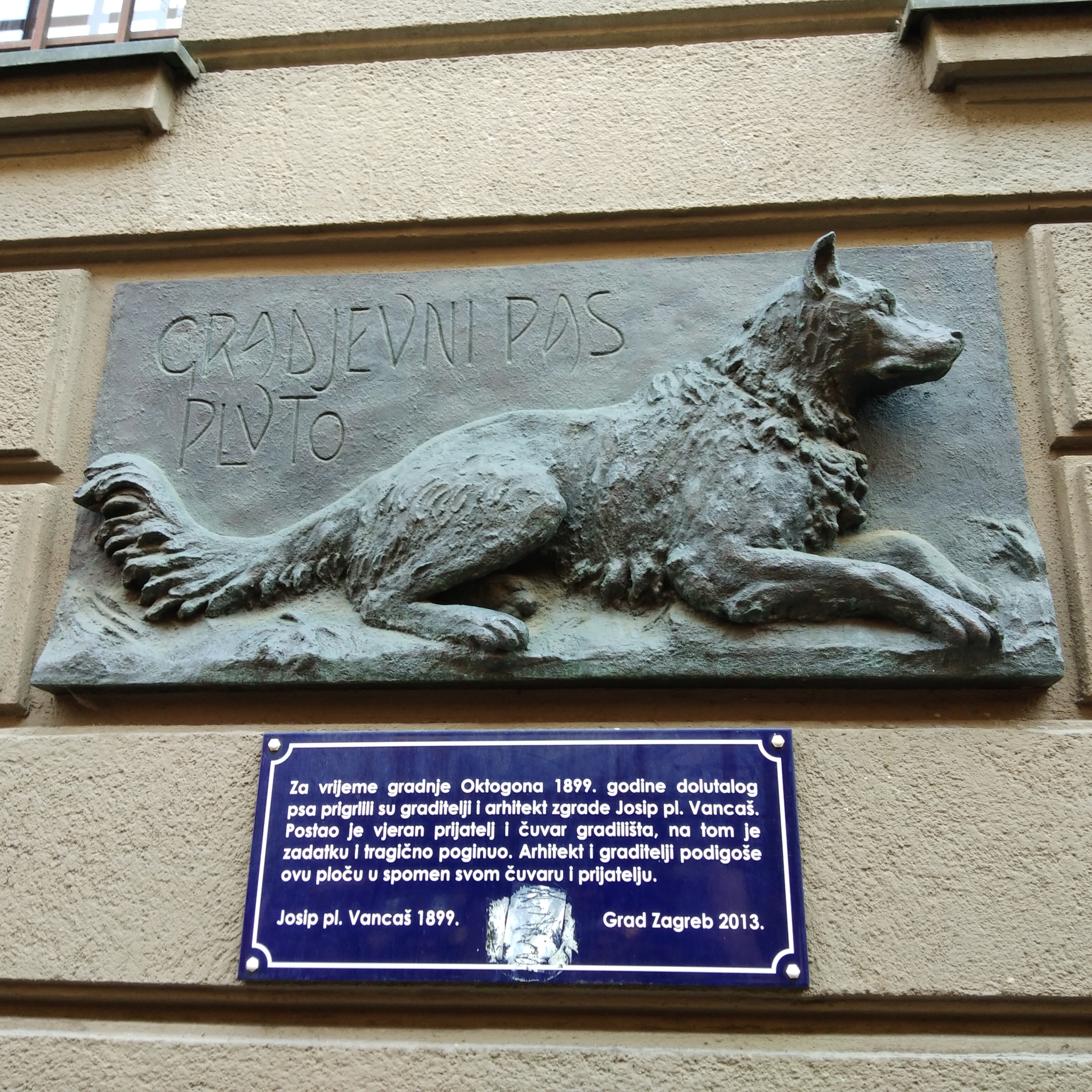 Since we were strapped for time, we realised that the easiest way to introduce ourselves to Zagreb was with the hop-on-hop-off bus tour. The ride took us around the city past the Square, railway station, national archives, botanical garden, national theatre and then to St. Marks Church. We descended at this iconic church to explore its uniqueness in more detail. Standing in the middle of a Square, it looked almost like a lone sentinel. This 13th century Church is famous for its amazing and striking multi-coloured tiled roof. To me, it looked more like a work of cross-stitch embroidery on the roof, depicting the Coat of Arms of Croatia and the Emblem of Zagreb. The South Portal of the Church was a fine display of 15 deeply etched evocative, Gothic sculptures of the Virgin Mary with the child, Christ, St. Mark and the Apostles. Even as we stood gazing at the tall spire with the year 1841 engraved on it, the clanging bells of the Church reverberated throughout the Square, filling us with reverential awe. Inside, the atmosphere of grave calm continued with its curves and arches in the ceilings, opening like the long petals of a flower. We prayed, clicked tons of pictures outside the Church and finally walked down the beautiful street. As we gazed at the roof-top view of the town, we ate roasted corn and enjoyed the mild sun on our faces. It was all very satisfying.

It was then that a local musician, sitting by the pavement, began playing Lara’s Theme from the film Dr Zhivago, on his electric guitar. He was jauntily dressed in a blue cap, brown jacket, dark glasses and a checked scarf around his neck. But it was his expert rendition of Lara’s Theme, so closely connected with my book The Trail of Four, that piqued my interest. Mesmerised, my friends and I stood listening to him as his notes filled the street with heady, musical magic. It suddenly dawned on me that the Universe was responding to my question. But, how could I really know the message was for me? As if the Universe had sensed my doubt, the musician’s wife appeared just then, leading a black dog. Luna the dog was an exact replica of my beloved dog, Tuggy, who had recently passed away. If that was not all, the man’s guitar box lay open and large black words on a chart paper read ‘All you need is love.’

It was my epiphanic moment. The Universe had sent me its clear message and the haze lifted from my mind. I knew that this surreal moment in Zagreb, with the soulful musical rendition, the cheerful musician, his wife and the dog Luna would remain my favourite and most deeply etched of all travel memories. On the way back to our apartment, we visited the impressive Zagreb Cathedral of the Assumption of the Blessed Virgin Mary. The cream façade with its two 100-metre spires and an elegant and detailed portal are striking features of this Gothic-style Cathedral. The spires can be seen from any part of the city and hence have a special significance. During the earthquake in March 2020, the tip of the South Spire fell off and we could see that restoration work was in progress. The sombre yet flamboyant neo-Gothic interior with the beautiful stained-glass windows and work was grand and calm. We lit candles and spoke in hushed tones, admiring and appreciating the majestic Cathedral.

Once outside, we bought souvenirs and as we strolled back to our apartment, I knew that Zagreb would stay in my mind as a charming city of education, culture, dogs and legends. Slovenia: From Lake Bled to coastal city Piran, know what else makes this European country scenic...