Akshay Kumar dropped a video revealing his first look as Chhatrapati Shivaji Maharaj from the Marathi film 'Vedat Marathe Veer Daudle Saat', and netizens have taken a dig into the scene

Akshay Kumar's first look video from Mahesh Manjrekar's upcoming film gets 'trolled', here's what netizens find wrong in it | Twitter
Follow us on

The first schedule for director Mahesh Manjrekar's Marathi upcoming film 'Vedat Marathe Veer Daudle Saat' starring Akshay Kumar as Chhatrapati Shivaji Maharaj has begun in Mumbai. Earlier on Tuesday, the actor dropped a video revealing his first look as the king character from Maharashtra. Even if the looks of Akshay Kumar impressed fans at first, they haven't restricted from criticising the scene.

"Bulb" was the key highlight from the released video, which was also seen making several tweets on the microblogging platform. Why did the bulb create buzz during the film's initial visual revelations? You'll first need to check out the footage of the actor while also closely focusing on the backdrop.

Did you get the catch? No worries, we'll spill the beans if you couldn't spot it the eagle's way. Netizens took to troll the scene of the actor walking as Chhatrapati Shivaji Maharaj, and the reason can be traced to the error in the background settings. Several tweets took a dig into the visuals and questioned whether electricity and bulbs happened to be there in those times when the Maratha emperor ruled. The chandelier which stole the spotlight from Akshay Kumar's gracious walk seemed to have bulbs fitted in it, which probably were invented much later.

Check out some tweets and trolls

Our Chhatrapati Shivaji Maharaj lived between 1630 to 1680.
The electric light Bulb came in about 1880 two hundred years later !
This is not even creative liberty- it's just lazy film making & terrible that there is such disregard for facts in a film as important as this one. https://t.co/avOyDzpWkL 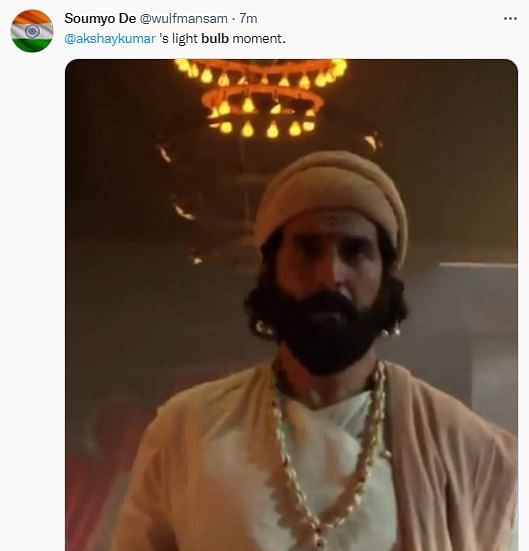 Read Also
'Ayesha' is trending on Twitter! No, not the 'Tu Aaja' viral girl, the recent trend hints at Bigg...