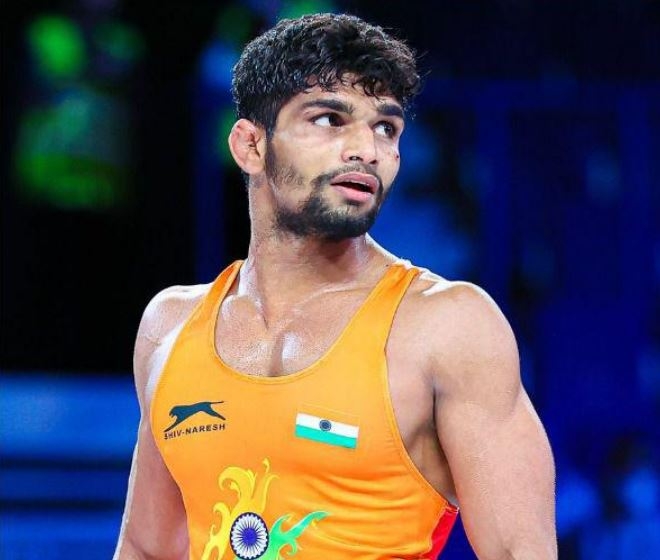 Ufa (Russia): Ravinder settled for a silver medal after being outwitted by his Iranian opponent but Bipasha emerged a surprise finalist in the women's 76kg to keep India's gold medal hopes alive at the junior world wrestling championship, here on Monday.

Up against a strong Rahman Mousa Amouzadkhalili, who had won the Yasar Dogu senior event in June this year, Ravinder could not make his moves as he was largely left to defend in the 61kg title clash.

The Iranian kept Ravinder tangled in head and body locks to win comfortably 9-3.

In 74kg play-off, Yash first scored a confident 9-2 win over Armen Musikyan from Armenia and then pulled off a 12-6 win over Kyrgyzstan's Stambul Zhanybek Uulu after trailing 2-5.

Yash changed the bout in the last 90 seconds with his timely quick moves. Stambul perhaps got overconfident after taking lead and Yash was quick to take advantage after his rival dropped his guard a bit.

Patil took bronze in 92kg after edging past Russia's Ivan Kirillov 2-1 in the play-off. Patil was trailing on criteria after both wrestlers scored points on each others passivity but the Russian was imposed a point penalty for foul play, and that proved decisive.

Anirudh (125kg) also added a bronze to India's tally with an impressive 7-2 win over Aydin Ahmadov from Azebaijan.

In the women's competition, Bipasha was slow off the blocks but got better with each match. She managed a 6-3 win over Kazakhstan's Dilnaz Mulkinova and then comfortably beat Mongolia's Odbag Ulziibat 9-4.

Simran moved into the women's 50kg semifinals with two dominant wins but lost the last-four stage match by technical superiority to formidable American Emily King Shilson. She will not fight for bronze.

Showing much promise for future, Simran first beat Romania's Georgiana Lavinia Antuca by technical superiority without conceding a point and then pulled off a victory by 'fall' in the high-scoring quarterfinal against Gultakin Shirinova of Azerbaijan.

The quarterfinal was fast with moves and counter moves across the two periods but eventually Simran got hold of Shirinova for a pin when she was leading 18-8.