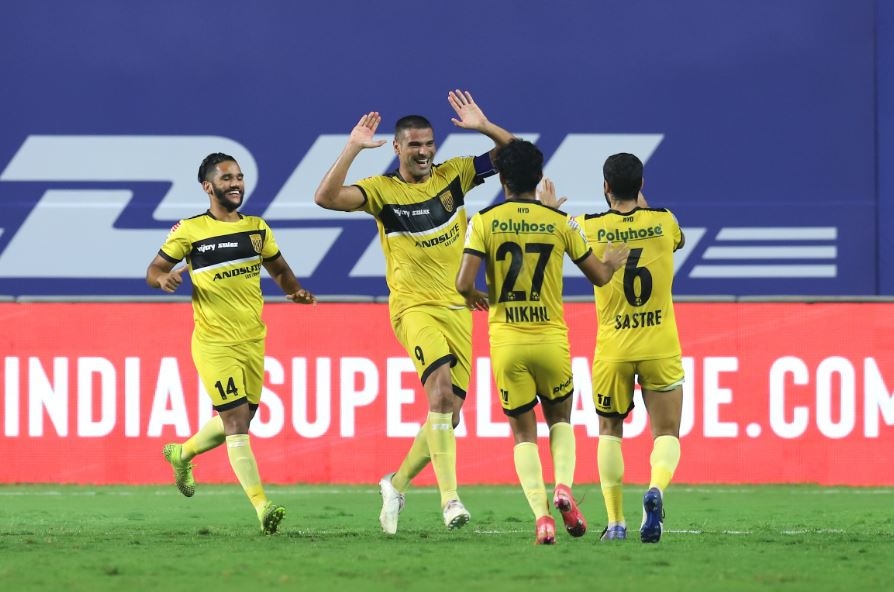 Vasco: Watched by their closest playoff rivals, a ruthless Hyderabad FC made a statement with a 4-0 demolition of former champions Kerala Blasters in the Indian Super League here on Tuesday.

A brace from Fran Sandaza (58, 63') and goals from Aridane Santana (86') and Joao Victor (90') helped Hyderabad climb to third on the league table. The result meant Kerala Blasters are now mathematically out of the playoff race.

Kerala were on top for the majority of the opening half, registering four shots on target compared to Hyderabad's zero.

Hyderabad looked livelier towards the end of the first half but it only showed when Joel Chianese shifted from the flanks towards the middle. However, inefficiency in the final third from both sides meant that the scoreline remained goalless at the break.

A howler from Kerala keeper Albino Gomes in the 21st minute almost gifted Hyderabad the opener. He made a mess while attempting to clear a long ball before Costa Nhamoinesu cleared it out of danger.

Seconds later, another big chance went begging for the Nizams. Victor whipped a teasing cross in the box for Santana, who blazed his header over the bar.

While Hyderabad eventually grew in the game, a defensive mistake from them in the 39th minute almost handed Kerala the opening goal. Prasanth Karuthadathkuni pounced on a miscued backward pass by Akash Mishra before firing a shot that went straight to Hyderabad custodian Laxmikant Kattimani.

Throughout this season, Hyderabad have always come out stronger in the second half, scoring more goals after the break. And they did that again.

Hyderabad broke the deadlock when Sandaza stabbed home from close range after a miscommunication between Bakary Kone and Costa.

Four minutes later, another blunder from Gomes saw Hyderabad double their advantage. Chianese latched on to a poor back pass from Kone before being clipped by Gomes inside the box. Sandaza converted the penalty with a calm panenka finish.

Hyderabad continued to pile on the pressure and their efforts would be rewarded soon. Santana joined the party late on after heading in Lluis Sastre's freekick, yet another set-piece goal for the Nizams.

In injury time, Santana turned creator, flicking the ball on from a cross towards Victor, who scored a simple tap-in.