2022 FIFA World Cup: Who has made the cut, who hasn’t and who faces a nervous wait 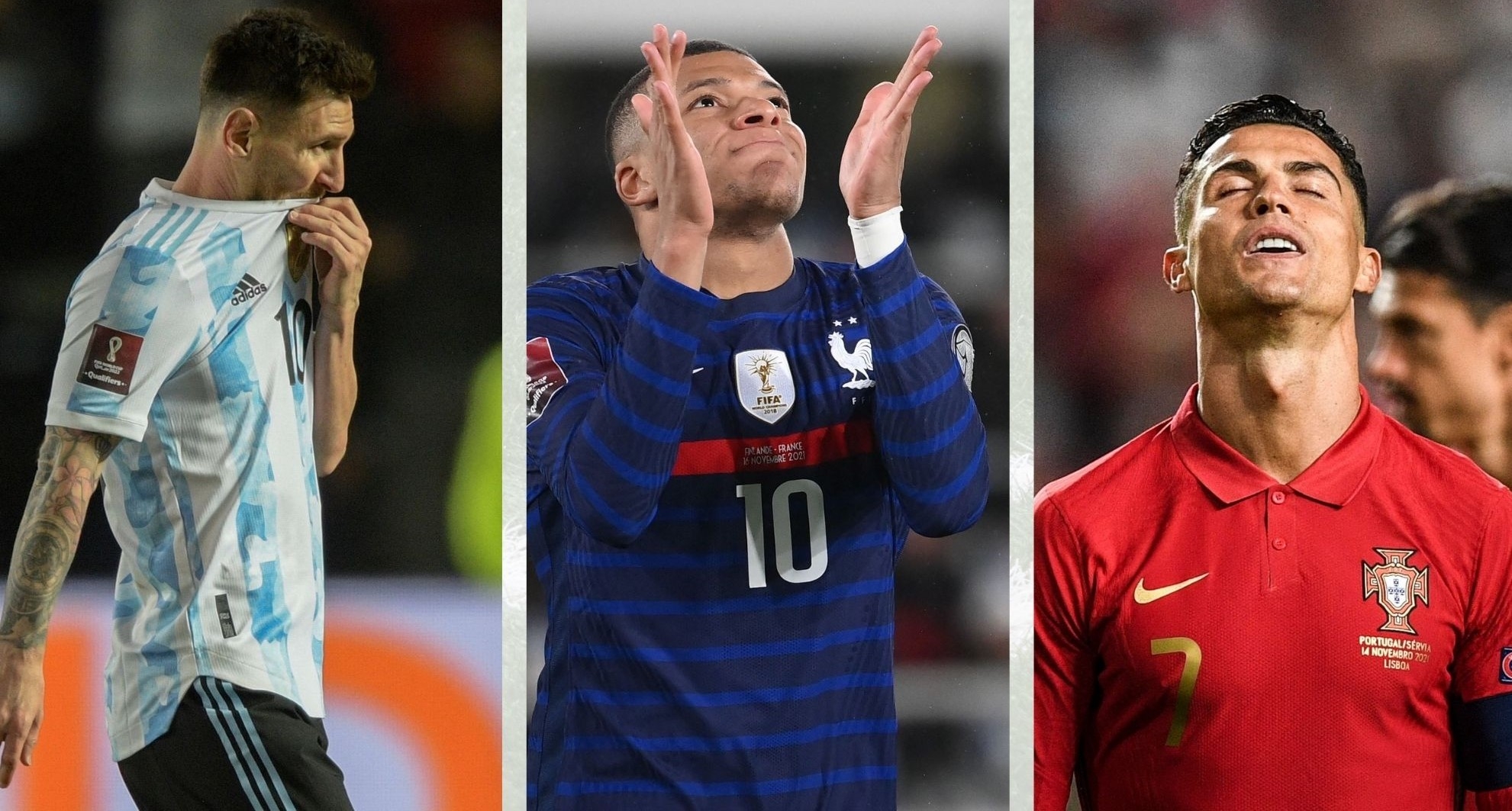 Messi's Argentina & Mbappe's France have qualified but Ronaldo's Portugal will have to go through playoffs | Photos: AFP

With almost a year to go until the winter 2022 World Cup starts in Qatar, quite a few nations have confirmed their place while the others have to still compete in the playoffs to seal a berth.

The very intense final round of European qualifiers came to an end on Tuesday, with reigning world champions France and Gareth Southgate's England making the cut for Qatar.

2020 European champions Italy & 2016 European champs Portugal have not yet confirmed their spot along with quite a few big names in Europe. That will be decided in the play-offs which will be held in March.

With just 13 of the 32 spots taken, there’s still a lot of exciting football left before the quadrennial extravaganza.

Teams that have made the cut

Who have qualified from Europe?

2018 World Cup winners France qualified for the showpiece event. England qualified as one of 10 group winners, sealing top spot in style by drubbing San Marino 10-0 in their final Group game.

Also sealing a spot are Belgium, Denmark and Germany.

Not all heavyweights from Europe had it easy though.

Serbia edged Portugal courtesy of a 90th-minute winner, leapfrogging them to first place. Both Spain and Croatia netted late to edge their respective closest challengers Sweden and Russia.

In a thrilling conclusion to qualifying, Switzerland took full advantage of Italy's draw against Northern Ireland to take Group C on Monday, while on Tuesday the Netherlands emerged victorious from a closely contested Group G.

Who is in the play-offs, how do they work?

Joining those 10 group winners in Qatar will be three other European nations, who will come from the 10 runners-up and two Nations League teams in the play-offs.

Wales and Scotland must go via this route but they will be joined by some surprising names.

European champions Italy and Cristiano Ronaldo's Portugal, as well as Sweden and Russia, join Scotland and Wales as the seeded play-off nations.

They could face Poland, North Macedonia, Turkey and Ukraine — who all sealed runners-up spots — plus the Czech Republic and Austria courtesy of their Nations League performances.

The play-offs will begin with six single-leg semi-final matches played between 24 and 25 March 2022.

The six semi-finals are split into three paths, leading to three play-off finals — also decided by a single match — which will take place between 28 and 29 March.

Who has qualified from the rest of the world?

Brazil became the first South American nation to qualify for the 2022 World Cup, doing so with six qualifiers to play following a 1-0 win over Colombia on Friday.

Copa America champions Argentina joined their rivals in qualifying after a goalless draw against Brazil at home and results elsewhere secured their spot on Tuesday.

Meanwhile, Ecuador are six points clear of Colombia and Peru in the race to guarantee qualification with a top-four finish.

Canada, the United States and Mexico occupy the top three automatic qualification places in the race to decide which North American, Central American and the Caribbean nations will be present in Qatar.

Canada went top after beating Mexico 2-1 on Tuesday, while USA drew 1-1 with Jamaica and Panama's 2-1 win over El-Salvador saw them draw level with Mexico on 14 points, behind only on goal difference in the inter-confederation play-off spot.

In Asia, where qualifying will resume in January, 16 points from a possible 18 ensure Saudi Arabia top a difficult Group B — which also includes Japan, in second, and third-placed Australia.

Over in Group A the top two have a significant margin with Iran, who have also dropped just two points, leading South Korea. Meanwhile, Qatar automatically qualify as hosts.

Finally, in Africa, five qualification places will be decided by five two-legged play-off matches due to take place in March.

Mohamed Salah's Egypt will be one of the sides involved, as will Algeria, Cameroon, the Democratic Republic of Congo, Ghana, Mali, Morocco, Nigeria, Senegal and Tunisia.