The flyby will be the closest-known since NASA's Galileo spacecraft made its penultimate close approach back on May 20, 2000.

Washington: NASA's Juno spacecraft will come within 645 miles (1,038 kilometres) of the surface of Jupiter's largest moon, Ganymede on June 7, the US space agency said on Friday.

The solar-powered Juno spacecraft will fly past Ganymede at 1:35 p.m. EDT (10:35 a.m. PDT). The flyby will be the closest-known since NASA's Galileo spacecraft made its penultimate close approach back on May 20, 2000.

The flyby will yield striking insights into the moon's composition, ionosphere, magnetosphere, and ice shell. Juno's measurements of the radiation environment near the moon will also benefit future missions to the Jovian system -- encompassing Jupiter, its rings and moons, NASA said.

Ganymede is bigger than the planet Mercury and is the only moon in the solar system with its own magnetosphere -- a bubble-shaped region of charged particles surrounding the celestial body.

"By flying so close, we will bring the exploration of Ganymede into the 21st century, both complementing future missions with our unique sensors and helping prepare for the next generation of missions to the Jovian system -- NASA's Europa Clipper and ESA's (European Space Agency's) JUpiter ICy moons Explorer [JUICE] mission," Bolton said.

The Europa Clipper is slated for a launch in October 2024 and expected to arrive in April 2030, while JUICE is planned for launch in 2022 and arrival at Jupiter in 2029.

Further, Juno's Stellar Reference Unit (SRU) navigation camera will help keep the Jupiter orbiter on course. It will also gather information on the high-energy radiation environment in the region near Ganymede by collecting a special set of images.

Meanwhile, the Advanced Stellar Compass camera will count very energetic electrons that penetrate its shielding with a measurement every quarter of a second. And the JunoCam imager will collect images at a resolution equivalent to the best from Voyager and Galileo.

Due to the speed of the flyby, the icy moon will -- from JunoCam's viewpoint -- go from being a point of light to a viewable disk, then back to a point of light in about 25 minutes. So that's just enough time for five images, NASA said.

"Things usually happen pretty quick in the world of flybys, and we have two back-to-back next week. So literally every second counts," said Juno Mission Manager Matt Johnson of JPL. 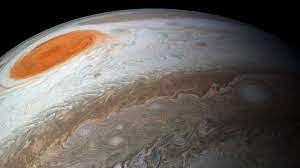