HomeMumbaiThane: The work under Vasundhara campaing will be evaluated on five nature elements

Thane: The work done by the civic bodies under the "My Vasundhara 3.0" campaign will be evaluated based on the elements of Panchamahabhuta related to nature, namely earth, air, water, fire, and the sky, informed additional commissioner of Thane Municipal Corporation (TMC) Sanjay Herwade.

Manisha Pradhan, chief environment officer of the government, presented the Majhi Vasundhara 3.0 campaign toolkit, which is issued to all local bodies.

Sanjay Herwade said, " Under this campaign, the TMC has undertaken an initiative titled environment and climate change to conserve and protect the environment and has focused on the five elements of nature called the 'Panchamahabhutas' which include earth, water, air, fire, and sky."

"Through this initiative, awareness will be created amongst citizens regarding climate change, environmental problems, and efforts that are being made to improve the environment. To evaluate the work done, 7600 marks for the Amrit group and 7500 marks for other groups excluding the Amrit group will be evaluated on Pancha Tattva." 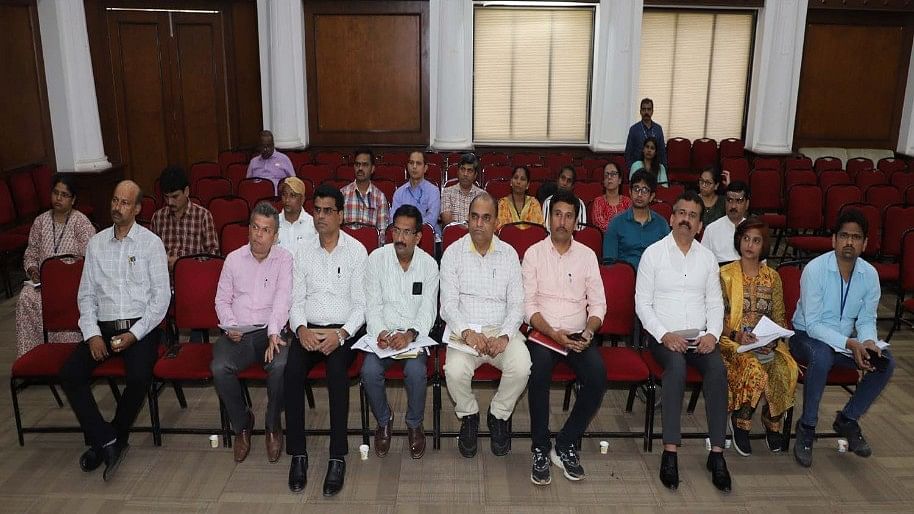 The administration and media during the workshop at Narendra Ballal Auditorium. |

Instructed to all the stakeholders to focus on Panchmahabhuta

During the workshop, Sanjay Herwade gave instructions to all the stakeholders to focus on elements based on Panchmahabhuta to bring Thane City to the top of the list.

In this campaign, wet-dry waste classification, public transport, bicycle use, prevention of air pollution, tree planting, and tree conservation will be evaluated in the area of local self-government bodies.

Herwade said, "Under this campaign, desktop evaluation of the work done by local bodies from April 1, 2022, to March 31, 2023, will be conducted from April 6, 2023, to April 31, 2023. "The field assessment of the local self-government bodies that have been successful in this evaluation will be done from May 2 to May 25, 2023, through a third party, and the results will be announced on Environment Day, which is June 5, 2023, and prizes will be distributed to the winners."