Throughout this time, citizens will be made aware of the importance of seat belts, be it through traffic personnel on roads, and social media.

Mumbai: A total of 204 e-challans were issued by the Mumbai Traffic Police on the first day of newly made seat belt amendment.

While the provision of wearing seat belts for everyone in a vehicle still stands strong, the Mumbai Traffic Police on Tuesday provided a breather for people for the next 10 days, in order to make them more aware and gear up for the enforcement of the rule.

The deadline for enforcement is from today and the police said on Monday that they will act against those not wearing the belt despite having it.

“Throughout these 10 days, citizens will be made aware of the importance of seat belts, be it through traffic personnel on roads, and social media. This way, they will slowly get accustomed to the idea, and understand the need for it, for their own benefit,” said a senior official in Mumbai Traffic Police. Additional commissioner of Police Mahesh Patil (Traffic) on Monday said, "In case the vehicle does not have the provision of seat belt, a warning will be given to the vehicle driver and the owner. However, if they do have seat belts attached to the seat and yet they don't wear it, actions will be taken strictly on them."

He added that the traffic cops on the road are sensitized about the way to tackle motorists.

On Tuesday, at several spots, there was the usual checking being undertaken by the traffic cops. In the Bandra jurisdiction, the cops were seen looking for the seat belts in the front seat as well as the back seat. In several cases, people were simply unaware of this new law of wearing a seat belt.

“Not everyone is on social media and not everyone reads the news daily. While checking today most were asking us what this is about. Throughout these 10 days, we can make them aware gradually and most of whom we explained to immediately agreed to follow the norm from now on,” said an official. 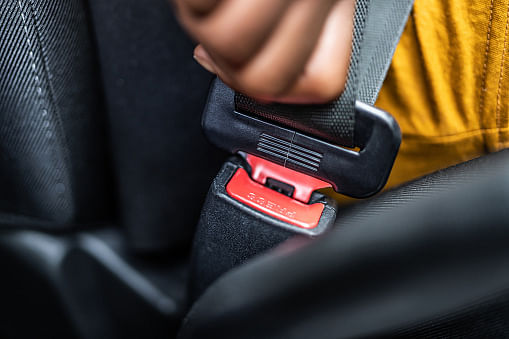 Police generously explained the new law and asked to follow it

Rajesh CP, a commuter, who was held by the cops, too was unaware of the newly made amendment. However, he was not fined but simply advised. “They generously explained the new law and asked me to follow it. Being a good citizen, I will be following it properly from now on,” said Rajesh.

Meanwhile, the taximen in the city is still uncertain about this rule, they say. While talking to FPJ one of the taximen said, “People are in a rush that is why they ride the taxi. To reach the station, their work, or home. In that rushed situation, they will not bother to wear seat belts, even if our taxis have seat belts fitted for the behind seats. As drivers we will continue to wear them as usual, but not sure about the passengers.”

As per MTP’s notification regarding the seat belt, all motor vehicle drivers and all commuters in vehicles, whoever travels on the road of Mumbai city will have to mandatorily wear seat belts while commuting. Otherwise, action will be taken under section 194 (b) (1) of the Motor Vehicles (Amendment) Act, 2019.

Initially, only the driver was obliged to this rule. However, after the former Tata Sons ex-chairman Cyrus Mistry’s death in a car accident, the authorities made it mandatory for all passengers. During the investigation of Mistry’s death, it was known that he, who was sitting in the back seat of his SUV, was not wearing a seatbelt.