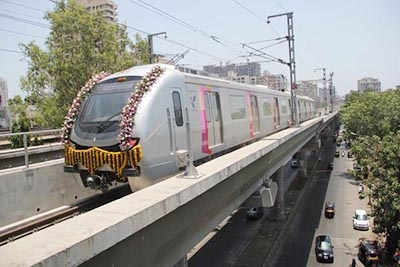 The moderate hike will be effective from Dec 1

Mumbai : It’s official. Commuters of the Versova-Andheri-Ghatkopar Metro line will have to shell out more for their metro rides from December 1. While keeping the minimum fares unchanged, the Mumbai Metro One Pvt Ltd (MMOPL)-led by Reliance Infrastructure Ltd has hiked the maximum fare by Rs 5 per trip.

Calling it a “moderate” hike, MMOPL has said that despite losses, the Company has deferred fare revision till now with the hope that the government would give in to their requests of operational subsidy and one-time capital grant. “While MMOPL continues to suffer losses of about Rs 300 crore per year, the company chose to defer any fare revision till November 30, 2015 and engage with the State Government with intent to finding a viable solution and to avoid giving any shock to its valued commuters,” the company’s statement said. They are quick to add, “Against the maximum fare of Rs 110 recommended by the Fare Fixation Committee (FFC), the maximum fare for Mumbai Metro after the revision is only Rs 45, while the minimum fare remains the same as before at Rs. 10.”

According to MMOPL, the operator has hiked the fares for single journey token, return journey, 45-trip monthly pass and Store Value Passes; and they have also revamped the slab structure. “The number of fare slabs has also been increased from the previous four to five now, in order to align the fare structure with the recommendations of the FFC,” the statement said.

A “modest hike” of about Re 1 per trip has been made in the fare charged on the 45-trip Monthly Pass which is currently available in two slabs of Rs 675 and Rs 900 for short and long trips respectively. These Monthly Passes will now be available for Rs 725 and Rs 950, which works out to an increase of just over Re. 1 per trip, the statement said.

Meanwhile, transport experts are calling this fare hike a well thought out move to “fool the commuters”. “This could be a fooling business because they know if they hike it Rs 110 from Rs 40 there will be a major drop in commuters. They will increase by Rs 10 say next month…another Rs 5 the next month…this could happen and people will not feel the pinch and this jump will not be noticed at all,” said Jitendra Gupta, transport expert.

Swami Krishnan, another transport expert added, “The fares have to be governed by what was decided in the concession agreement. The government cannot allow commuters to pay for the government’s errors.”

Had the state government accepted a proposal made way back in 1963, Mumbai could have had an underground Metro line at least 40 years ago.

This plan for an underground railway network, commissioned by the state in the early 1960s, was drafted by PG Patankar, an engineer and railway expert employed at the Bombay Electric Supply and Transport. Patankar envisioned five inter-connected underground Metro lines for the island city of Bombay, whose local trains and buses were already overburdened by a burgeoning population.

If his plan had been approved and taken forward, Mumbai could have been the first city in India to get an underground Metro: Kolkata’s lines were laid in 1984 and Delhi didn’t follow suit until 2002.